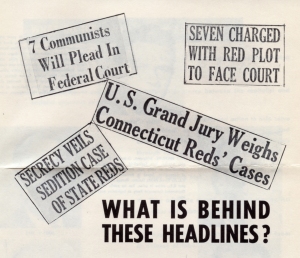 Portion of a flyer advocating for the release of seven members of the Communist Party of Connecticut jailed for subversive activities in 1954.

In 1954 seven members of the Communist Party of Connecticut were arrested on charges of violating the Smith Act.  The Smith Act, also known as the Alien Registration Act, was enacted in 1940 to set criminal penalties for anyone prosecuted for advocating the overthrow of the United States government.  In the 1940s and 1950s, a time of the fear of Communism in the country, the Smith Act was used against political organizations and persons who disagreed with the government, even those who did so in non-violent ways.

Questions to ask when considering these documents:

1) Is it right to jail someone just for his or her beliefs?  Would it be right to put someone in jail if the government thought his or her beliefs would cause harm to America?  Does the Smith Act violate the First Amendment of the U.S. Constitution?

2) What is the purpose of this flyer?  Does this flyer show that the Communist Party of Connecticut was trying to overthrow the government of the United States?

3) How do people think and behave when they are afraid?  How does this flyer give evidence to the fears of the American people in the 1950s?

This primary source conforms to the Connecticut Social Studies Curriculum Framework for High School students, particularly Strand 1.9 — the rights and responsibilities of citizens, grade level expectation 47 — Analyze the tension between the need for national security and the protection of individual rights.

Larger images of the pages of this flyer are available here: page 1, page 2, page 3, page 4.

This flyer is from the papers of Jack Goldring, a member of the Communist Party of Connecticut and one of the seven arrested for subversive activities in May 1954.  Goldring was eventually released on a technicality.  By 1957 convictions under the Smith Act were deemed unconstitutional but the statute has never been repealed.

More information about the Smith Act can be found at this site from the University of Illinois: http://www.english.illinois.edu/maps/poets/g_l/jerome/smithact.htm; and the Encyclopedia Brittanica Online: http://www.britannica.com/EBchecked/topic/549923/Smith-Act.