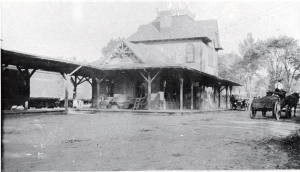 On Wednesday, October 26, at 7:00p.m. I will be giving a talk at the Oliver Wolcott Library in Litchfield, Connecticut, about that town’s railroad history.  The story starts with the Shepaug Valley Railroad, which opened for business on January 1, 1872, and traveled from Hawleyville to Litchfield in this mountainous region of western Connecticut.  After financial difficulties in the 1870s and 1880s forced the railroad to restructure, the line emerged in 1887 as the Shepaug, Litchfield and Northern Railroad, only to come under the control of the massive New York, New Haven & Hartford Railroad, better known as the New Haven Railroad, in 1892.  From that time to its final demise in 1948 it was known as the Shepaug Branch of the New Haven Railroad.

As the Shepaug, Litchfield and Northern Railroad it was nicknamed the “slow, late and noisy.”   The route contained almost 200 curves, one tunnel, and several stiff grades.  It was known as the “second most crooked railroad in the U.S.” (the most crooked was the Mount Tamalpais and Muir Woods Railway in Marin County, California), measuring 32 miles of track but was actually 17 miles as the crow flies.  Train speed could never exceed 20 miles per hour.

If you are interested in attending the talk at the Oliver Wolcott Library you can register at http://www.owlibrary.org/programs.php.

You can find more photographs from Litchfield’s railroad past on Flickr, at http://www.flickr.com/photos/doddcenter/sets/72157627746164811/

3 thoughts on “The History of the Railroad in Litchfield, Connecticut — photographs and a talk on Wednesday, October 26”