The Digital Public Library of America (DPLA) connects people with the rich history found in the public institutions across America. As you may remember, the UConn Library, which runs the Connecticut Digital Archive, officially joined the DPLA as a hub for CT history last month. In honor of DPLAFest2019, which happened over the last two days, we have another installment from Greg Colati on the kind of information you can find now that we have access through this new platform.

A Sleeping Giant Wanders the Country 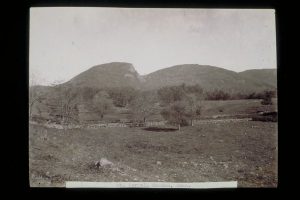 View of Mount Carmel across fields, Hamden. The Connecticut Historical Society. (1890) Retrieved from the Digital Public Library of America.

Have you ever seen the Sleeping Giant? From certain perspectives, this natural rock formation in Hamden, CT resembles a man lying on his back. The story of a natural feature being the remains of a slumbering human giant is a part of the mythology of almost every culture, from Norse legends, to Greek mythology, North American creation stories, and Polynesian folk tales.

According to the legend as told by Connecticuthistory.org, our Sleeping Giant received its name thanks to a local Native American creation story. They believed that “the giant rock formation embodied Hobbomock, an evil spirit who became angry at the neglect of his people. In his rage, Hobbomock stamped his foot near the current location of Middletown, which caused the course of the Connecticut River to change. A good spirit named Keitan is said to have cast a spell on Hobbomock that caused him to sleep forever, preventing any further damage to the area.” 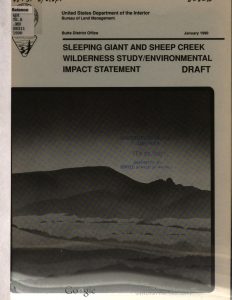 to name just a few.  All of them offer a variation of on the theme of the evil spirit being subdued by sleep. Judge for yourself which one most resembles a recumbent human. These stories and more are available from the Connecticut Digital Archive and the Digital Public Library of America, brought to you by the UConn Library.