The late U. Roberto (Robin) Romano was an accomplished photographer, award-winning filmmaker and human rights advocate who unflinchingly focused his eye and lens on children around the world capturing the violation of their rights.

Since 2009, Romano had made a limited number of his images available to researchers through the UConn Libraries’ Archives & Special Collections. Now, two years after his death, his total body of work, including video tape masters and digital video files, hundreds of interviews, thousands of digital photos and prints, plus his research files have been given to UConn and will now be available to those who examine human rights issues.

More than 100 of Romano’s images of child labor originally exhibited at the UConn’s William Benton Museum of Fine Art in 2006 are available online from the University Archives and Special Collections (http://hdl.handle.net/11134/20002:20110094). These are the first of the more than 130,000 still images that will be available online for research and educational use once the collection is processed. The Archives & Special Collections plans to digitize the entire collection of analog still images, negatives, and research files creating an unprecedented online resource relating to documentary journalism, child labor and human rights, and other social issues that Romano documented in his lifetime.

The gift was made by the independent producer/director Len Morris, Romano’s friend of more than 30 years, with whom he collaborated on a trilogy of films focusing on children’s human rights, Stolen Childhoods (2005), Rescuing Emmanuel (2009) and the just completed, The Same Heart, in which Romano was the Director of Photography.

Len Morris, left, and Robin Romano filming at a school in Brazil.

“This gift makes us stewards of Robin’s legacy and dream,” said Martha Bedard, vice provost of the UConn Libraries. “We are honored to make his work available to faculty and students studying human rights in Storrs, and to draw attention to the issues he championed to those around the world.”

In physical terms, Romano’s body of work showcases his mastery of his medium, his ability to capture children in poignant, often heart wrenching conditions, and the methodology behind his award-winning work, Morris asserts.

“More importantly, as the result of his life’s work 80 million fewer children are working in child labor, 40 million children who were forced to work like animals are now in schools and international laws have been passed to protect children,” Morris says. “In short, Robin’s images changed minds, hearts, and the fueled the debate.”

The son of the artist and Works Progress Administration (WPA) muralist Umberto Romano, Robin began his career in documentaries as a producer and cameraman for Les Productions de Sagittaire in Montreal, where he worked on several series including 5 Defis and L’Oeil de L’Aigle.

Romano’s documentaries have been widely recognized. The film The Harvest/La Cosecha received a Special Achievement Award, from American Latino Media Arts/ National Council of La Raza) in 2011, an honor he treasured, coming from the entire Latino community.

1433FN09
©ROMANO
10-Year-Old Child Laborer at a Gravel Quarry
Orissa, India
A young girl carries a basket filled with 40 pounds of rock on her head. During the course of a day she will carry over a ton of rock in 100 degree plus weather. Exposure to the rock dust from the grinder causes silicosis of the lungs and inevitably leads to respitory illness and sometimes death. 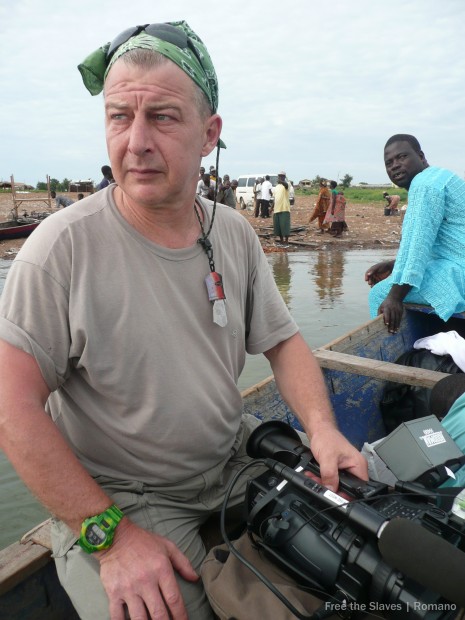