The EPA has created a web application related to the Toxic Release Inventory (TRI) Program. According to the myRight-to-Know website, the app “maps nearby facilities that report to TRI, as well as large permit holders in the Air, Water or Hazardous Waste programs that are expected to produce, manage or release TRI-reportable chemicals.”
The application uses an address search and the Google Maps basemap. When a user clicks on a facility that is displayed on the map, the user can access the facility’s report. For example: 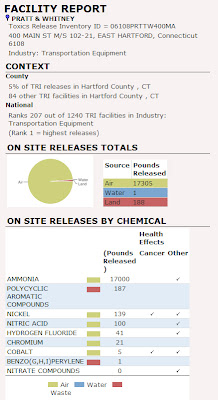 A Pratt & Whitney facility, which is located in East Hartford, has a report that shows it is ranked 207 out of 1,240 facilities nationwide in its industry (Transportation Equipment)- with 1 representing the highest amount of releases. The facility report also shows what chemicals are being released, how much is being released, where the releases are going (Air, Water, or Land), and the chemicals’ health effects. In the case of this Pratt & Whitney facility’s report, the vast majority of its releases go into the air and include the carcinogens Nickel and Cobalt.
The myRight-to-Know app is also available en Español.