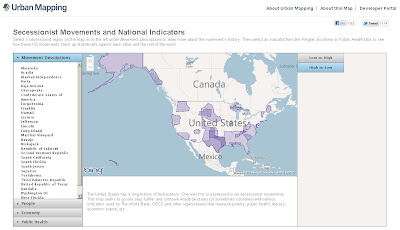 The United States has seen many secessionist movements throughout its history. Of course the most famous is the Confederate States of America, which seceded and triggered The Civil War, but, did you know that Dukes County, Massachusetts (much of which is made up of the communities on Martha’s Vineyard) threatened to secede from Massachusetts in 1977? Or, that 5 of 6 counties in southern New Jersey approved a non-binding secession proposal in 1980? Urban Mapping has an interactive map of secessionist movements throughout the history of the United States, which includes historical information on the movements in addition to socioeconomic indicators of the geography associated with each respective movement. Information on the movements comes from Wikipedia and the Lost States Blog. The socioeconomic indicators apparently come from aggregating county data for geographies in the U.S. while The World Bank is cited for international data.