Maricopa, Ariz., Receives Movers From and Sends Them to Largest Collection of Counties

The U.S. Census Bureau released estimates from the American Community Survey showing how many people migrated from one specific county to another during the course of a year ─ the first such numbers published since these data were collected as part of the 2000 Census. 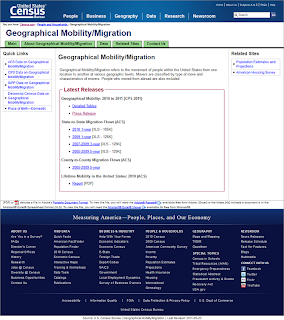 The American Community Survey compiles data over a five-year period and asks people where they lived one year prior to being surveyed. The first five-year estimates released covers the years from 2005 to 2009.

The 2005-2009 American Community Survey County-to-County Migration Files provide tables for each county in the nation, showing both “inflows” and “outflows.” Inflows are the number of people living in a given county who lived in another specific county one year earlier; outflows represent the number of people who lived in a particular county one year earlier who subsequently moved to another specific county.

Maricopa, Ariz., had the largest number of inflows of people for any single county in the nation. People moved there from 993 different counties. Similarly, Maricopa led the nation with the largest number of counties in which it sent outflows of people ─ a total of 1,156 counties. This means that individuals leaving Maricopa were more dispersed throughout the country than individuals leaving any other county. Pinal, Ariz. (13,452 residents); Los Angeles (12,403); Pima, Ariz. (7,349); San Diego (6,693); and Coconino, Ariz. (3,994) were among the counties with the highest number of people moving into Maricopa.

Prior to this product, the only migration flow tables available from the American Community Survey covered state-to-state flows; the latest such release, from the 2010 one-year estimates, was published in November 2011. Later this year, the U.S. Census Bureau plans to release a file from the 2006-2010 American Community Survey five-year estimates showing county-to-county flows by demographic characteristics, such as age, sex, and race and Hispanic origin.