In the past weeks, the U.S. Census Bureau has produced several new reports based upon their continuing analysis of 2010 Decennial Census data in conjunction with other ongoing research and assessments they make of the American population and our lives. These reports, summarized below, cover a broad range of both the knowledge Census data makes possible and of the work of the Bureau. 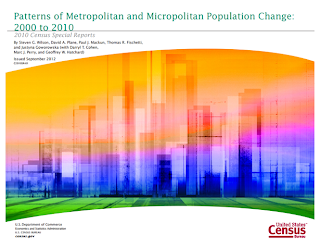 The residential populations of the downtown centers of many of the country’s largest cities have grown at rates of ten percent or more, between 2000 and 2010. The Census Bureau arrived at this finding by considering the population living within two miles of the city hall, in relation to the overall population of the metropolitan region. This and other new analysis have been made available in the new special report, Patterns of Metropolitan and Micropolitan Population Change: 2000 to 2010. 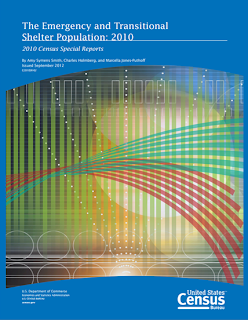 In The Emergency and Transitional Shelter Population: 2010, a 2010 Census Special Report, the numbers tabulated refer only to the population counted at emergency and transition shelters with overnight facilities and only at the time of the Decennial Census enumeration. The emergency and transitional shelter population was counted in conjunction with counts at soup kitchens, mobile food vans, and other non-shelter outdoor locations as part of Census Bureau’s Service-Based Enumeration Operation. The total of these data, however, do not represent an accurate count of the country’s entire homeless population. 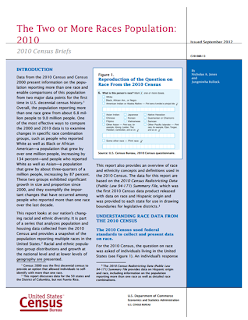 The Census Bureau began giving the option for people to identify as belonging to more than one race in the 2000 Decennial Census. Out of the 2010 Census, therefore, has come the first comparative analysis of racial identity that includes multiple-race categories. One of the most striking findings examined in this brief, The Two or More Races Population: 2010, is that the population of people of two or more races grew significantly faster than the single race population, at rates of more than 50 percent in some geographies (compared to 9.7 percent overall U.S. population growth). 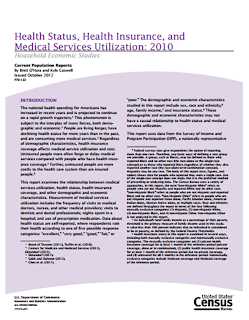 The Census Bureau conducts an ongoing longitudinal study of income, demographics, and health insurance called the Survey of Income and Program Participation (SIPP), in order to obtain a representative sample of health and medical trends in the American population. For the newly released brief of the Household Economic Studies, Health Status, Health Insurance, and Medical Services Utilization: 2010, between approximately 50,000 and 65,000 respondents were interviewed regularly between 2001 and 2010. The survey collected a combination of quantitative economic, medical and demographic statistics along with self-reported evaluations of health status. Among the survey’s findings, the Census Bureau reports that the frequency of doctor visits per year has declined across the entire population throughout the study period, regardless of insurance coverage or health status.

Each year, the Census Bureau aggregates the data on financial status of state and local governments in the Annual Surveys of State & Local Government Finance. The 2010 data have recently been released, and are summarized in the report State and Local Government Finances Summary: 2010. The statistics enclosed cover both revenues and expenditures, debts and assets. For revenue, state and local governments overall saw a large increase of 51 percent from 2009 to 2010. In expenditures, education continued to be the largest overall expense across governments, as illustrated in the Census Bureau’s map below. 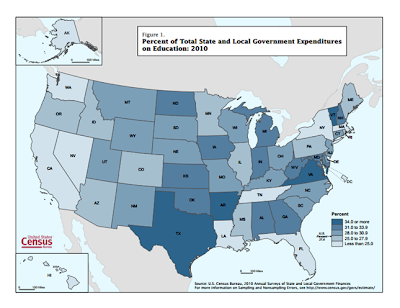