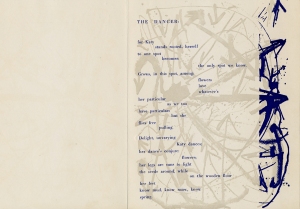 Found among the literary broadside collection in Archives and Special Collections are works that represent unique, unusual and innovative collaborations between poets and artists.  Poetry broadsides produced between the 1950s and early 1970s offer some of the most diverse examples of poem and picture combinations.  Visual artists, printmakers, typesetters, and graphic artists emerging from American schools and cities experimented with forms and techniques influenced by their association with other artists, writers, and performers.

Black Mountain College in the 1950s is often described by those that attended and taught there as a laboratory for artistic collaboration.  The print shop at the small college in the foothills of North Carolina’s Blue Ridge Mountains was a space where experimentation and collaboration were encouraged, producing small-run editions of poetry and poetry broadsides alongside the works of print-makers and visual artists.  Joel Oppenheimer partnered with the painter Robert Rauschenberg, both students at the time, and the poet and emerging small-press publisher Jonathan Williams, to create ‘The Dancer’.

Join us in celebration of the exhibition ‘Poem and Picture’ at the Benton Museum at the University of Connecticut featuring ‘The Dancer’ (“The Dancer”, 1951, poem by Joel Oppenheimer, drawing by Robert Rauschenberg, printed at Black Mountain College by Oppenheimer and Jonathan Williams, Jargon 2), and National Poetry Month.