Jeffrey Egan is a graduate summer intern in Archives & Special Collections working on the papers of Congressman Bruce Morrison.  Jeff is a PhD. Student in US History at the University of Connecticut.  His dissertation will examine the social and environmental history of the creation of the Quabbin Reservoir in Massachusetts during the 1920s and 1930s.

This summer, as Congress debates a bill designed to overhaul the US immigration system, one former representative from the state of Connecticut will have his ear to the ground.  Bruce A. Morrison, a Democrat who served as a Representative for Connecticut’s Third District from 1983 to 1991, is an ardent supporter of immigration reform.  During his tenure in congress, he was appointed Chairman of the House Subcommittee on Immigration and supported the passage of the Immigration Act of 1990, the last substantial immigration bill passed by the US legislature.  Perhaps his most celebrated addition to the legislation, especially in the estimation of Irish-Americans, was the “Morrison Visa” program, which increased the number of visas granted to various nationalities including 48,000 for Irish immigrants.  Morrison later served as a member of the US Commission on Immigration Reform, which produced a report in 1997 recommending further action on the issue. 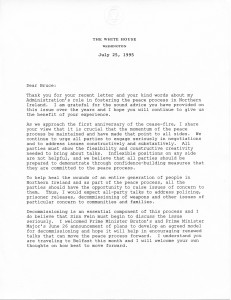 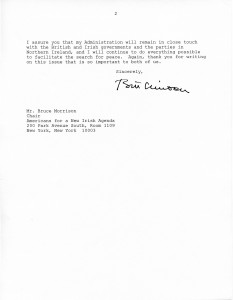 Beyond documents relating to immigration reform, the Bruce A. Morrison papers include materials from his 1990 campaign for the Connecticut governorship, his work as chair of the Federal Housing Finance Board, and his role in the Irish peace negotiations during the 1990s.  A former Yale Law School classmate of Bill Clinton, Morrison also devoted his political energies to rallying Irish-American support for the Clinton/Gore campaigns in 1992 and 1996.

As a graduate student intern at the Archives & Special Collections of the Thomas J. Dodd Center, my task is to prepare Mr. Morrison’s papers for the researchers of the future.  Just a few short weeks into the summer internship, my project has opened my eyes to the vitally important, and challenging, work of archival management that makes possible my studies as a graduate student in the history department.  Working behind the scenes, an archivist must strike a delicate balance between enhancing ease of access to a person’s papers and retaining the organizational integrity of the documents, which can give researchers some sense of the life and worldview of the historical actor.  This new understanding of how documents move from private to public hands, and the nuanced work of the archivist, will inform my own research this fall when I hang up my archival gloves and return to the reading room.