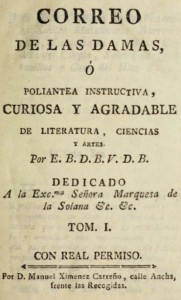 Have you ever wondered what happens after a researcher uses one of our archival collections available online or as a digital surrogate? Sometimes online or remote users are hard to track and most of the time we are unaware of how they end up using our materials but sometimes we are lucky and they will contact us and share their work with us.

I am happy to report about three scholars (one from Japan and two from Spain) who shared their works and their thanks for giving them access to our collection of Spanish Periodicals and Newspapers.

In 2009 we got a request to scan a copy of all the issues of the newspaper, El Ebusitano, the first weekly newspaper (1846-1847) in the island of Ibiza, one of the Balearic Islands, Spain. Hirotaka Tateishi, professor and chairman of the Graduate School of Area and Culture Studies at Tokyo University of Foreign Studies, was tracking down this rare newspaper which was not available either in Ibiza or in Spain’s National Library, to clarify the real beginnings of this publication (who was the first editor, how long was published, where it was published, etc.). Professor Tateishi mentioned in his publication that he had found many references to the existence of the newspaper in old reference books, but always with the caveat that the author(s) had never been able to see the originals. Fortunately for Prof. Tateishi, the Archives and Special Collections was able to provide a digital surrogate of this newspaper title for his research since we had acquired this collection around the 1970s–a collection amassed by one of the most famous bibliophiles in Spain, Juan Pérez de Guzmán y Boza, Duque de T’ Serclaes. In 2010, Prof. Tateishi published his findings, ” “El Ebusitano”: el primer periódico de Ibiza en los fondos de una biblioteca americana” in an open access journal, Mediterranean world, published by the Mediterranean Studies Group at Hitotsubashi University,

Beatriz Sánchez Hita and María Román López are scholars and collaborators from the University of Cádiz, Spain. Their research focus on the role of women in the shaping of the nascent printing culture (in the form of newspapers) in Spain during the 19th century. One of the newspapers that they were looking to have access to was El Correo de las Damas (1804-1808). Until recently this newspaper was very difficult to access by Spanish scholars since there are no copies available in any of their main libraries, including Spain’s National Library. We got a request from them in 2009 to photocopy all 15 tomes for this newspaper but we could not do so at the time because of preservation concerns. Instead, I decided to apply for a library grant to digitize all the tomes for this title, which became the beginning of our Spanish Periodicals and Newspapers digital collection, which not only comprised of a selection of women’s magazines, but also includes a selection of 18th and 19th century magazines (mainly literary) from this collection, for a total of 39 digitized titles. 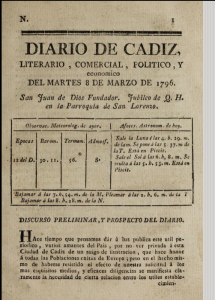 Although María Román López visited us at the archives right after we finished the digitization of Correo de las Damas in September of 2009—to study the physical characteristics of this title—the majority of their research was done online. Prof. Beatriz Sánchez Hita benefited immediately with the new access of Correo de las Damas, and later on the Diario de Cádiz, and was able to finish two scholarly articles published in 2009 and 2010, respectively, about the role of women (as writers or as readers of newspapers) in the debates developing in the Spanish press regarding the Constitution of 1812, “Escritoras y Periodistas ante la Constitución de 1812 (1808-1823)” and the War of Independence (from France), “Las escritoras en la prensa de la Guerra de la Independencia vistas por sus colegas : ¿lucha de género o política?“.

…study of the Correo de las Damas (1804-1808), a journal aimed at women that was published in Cadiz as a supplement to Diario Mercantil (1802-1814). It was edited by Joseph Lacroix, Baron of Bruère, and appeared in print with a total of 17 volumes, of which we had access to all except No. 16. The study includes a consideration of the figure of his editor and promoter, in order to proceed with the characterization of this magazine aimed at women, which has often been overlooked in the historiography of journalism, being still a rarity today. It devotes special attention to the description of its contents following their arrangement in teh (sic) pages of the journal (3).

As Sáchez and Román explained about the rarity of Correo de las Damas:

As you can see, making accessible rare archival materials digitally has an immediate impact on the production of new scholarly knowledge as these examples illustrate. It is always satisfying to see how increasing access to these cultural heritage collections benefit not only our local users but the global community of scholars–specially scholars from the country where the records were created. We will continue preserving these invaluable cultural heritage collections and making them more accessible through digitization for many years to come.