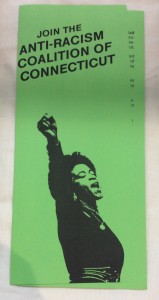 On June 18 2015, Dylann Roof, 21 years old, shot and killed nine African-Americans at the Emanuel African Methodist Episcopal Church in Charleston, South Carolina.  When Roof was apprehended, he wore the flags of Apartheid-Era South Africa and Rhodesia, former white supremacist settler colonial states in Southern Africa.  Roof also had Confederate flags hung on his walls and frequented white power websites.  These race based murders fueled an ongoing debate about Confederate symbolism and its usage in the private and public spheres.  The Alternative Press Collection at the Archives & Special Collections is comprised of fringe publishing from both ends of the political spectrum such as White Patriot and Death to the Klan.  The current debate around the Confederate flag draws on long standing uses of historical interpretation and cultural identity dating to the Civil War and Reconstruction era of 1861-1877.  As demonstrated in this exhibition currently on display in the Archives through these selected materials from the Alternative Press, Northeast Children’s Literature and Labor collections, figures such as Confederate General Nathan Bedford Forrest, abolitionists John Brown and Frederick Douglass serve as symbolic totems of heritage, spirituality and citizenship.

The Alternative Press demonstrates the importance of underground publishing for dissemination of radical views outside of the mainstream outlets.  These materials appear as independent press booklets, kitchen table press newspapers, handmade flyers and Xerox pamphlets.  An important independently published work of fiction The Turner Diaries (1978) represents the modern ideology of radical white power groups which draws on conservative elements of government control, restriction to firearms, racial purity and vigilante justice.  As described on the 1980 edition’s back cover: 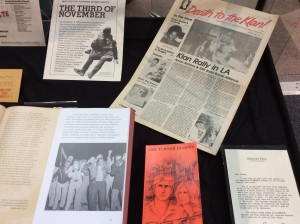 “What will you do when they come to take your guns?

Earl Turner and his fellow patriots face this question and are forced underground when the U.S. government bans the private possession of firearms and stages the mass Gun Raids to round up suspected gun owners.  The hated Equality Police begin hunting them down, but the patriots fight back with a campaign of sabotage and assassination.  An all-out race war occurs as the struggle escalates.  Turner and his comrades suffer terribly, but their ingenuity and boldness in devising and executing new methods of guerrilla warfare lead to a victory of cataclysmic intensity and worldwide scope.

The FBI has labeled The Turner Diaries “the bible of the racist right.” If the government had the power to ban books, this one would be at the top of the list.  The Turner Diaries is the most controversial book in America today — and it’s a book unlike any you’ve ever read!” 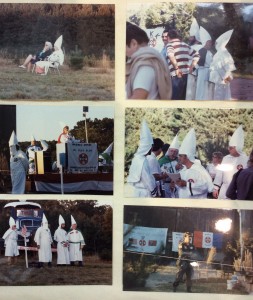 Members of the Invisible Empire of the Ku Klux Klan of Shelton, CT. East Windsor, August 30, 1984.

From 1980 to 1985, the Klan had a resurgence in Connecticut.  Rallying in towns such as Meriden, East Windsor, Farmington, Scotland and Shelton, CT.  These demonstrations were permitted by local governing bodies and law enforcement.  To match, anti-Klan demonstrations grew out of union organizations, student groups, peace activists and community members.  A central figure in anti-Klan organizing was labor activist Steve Thornton whose archives contain photographs, organizer’s materials, media reports and literature tracking the rise and fall of the Connecticut chapter of the Klan into the mid-1990s.  Similarly, organizing within the University of Connecticut community occurred through the Committee Against Racism in Storrs as a result of on campus recruiting and the rally occurring in nearby Scotland, CT in 1980.

As the final Civil War sesquicentennial year transitions to 150 years since Reconstruction, the importance of this formative period in American identity still reverberates. These archives demonstrate that racism and print literature have maintained their foothold in susceptible communities.  These materials are collected to inform our present knowledge of history and the uses of racism for structural, cultural and political oppression.