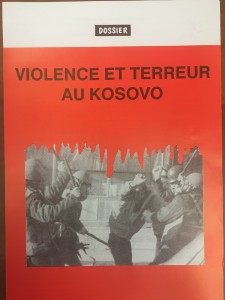 With ever normalizing relations between the Balkan states, especially with the recent Serbia-Kosovo talks as well as Montenegro’s invitation to join NATO (North Atlantic Treaty Organization), from an outsider’s perspective the progress made in the region seems ordinary. One cannot however ignore the fact that the former Yugoslavia has endured violent waves of wars that would permanently strain relations between the various ethnic groups and nation-states that would emerge from the chain of conflicts. The complicated history of the region and its path towards stabilization can be found through the Laurie S. Wiseberg and Harry Scoble Human Rights Internet Collection (HRIC) found in the Archives and Special Collections at the Thomas J. Dodd Research Center, which contains a plethora of articles, resolutions, and books relating to the former Yugoslavia. 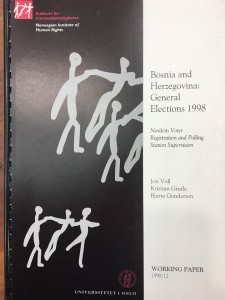 I have taken on the task of analyzing the archives relating to the former Yugoslavia, which encompass numerous topics especially the conflicts of the 1990s (Yugoslav and Kosovar Wars). In addition to conflict-related documents, the archives offers a wide range of materials that highlight the premonition of these wars with Tito era documents and also portray other aspects of the political and social structure of Titoist Yugoslavia. This rich collection also contains post-1995 articles that highlight the arduous societal and state reconstruction of the newly independent states. With just a quick glimpse into the collection, one can see the deepening separation of the once harmonious state.

Given the variety and amount of documents relating to the Balkan region, I have not only analyzed all the materials in the Human Rights Internet Collection relating to Yugoslavia, but in addition, have created a guideline that breaks down the region into distinct topics such as Yugoslav-Soviet relations, the influence of the Solidarity movement in Yugoslavia etc., which will help future readers and researchers pinpoint their desired topics quicker and more effectively. I have furthermore written very concise descriptions on some of the collections and their relation to certain topics.

As someone who plans on attending law school during the next school year, I have taken the opportunity to better understand and enrich my knowledge of the area of the world that has always been of interest to me. Yugoslavia has a very unique history that fascinates me, given the fact that the country was one of the only significantly multi-ethnic nations in post-World War II Europe. The repercussions to the Yugoslav War have also left a very distinctive social structure (almost complete segregation), especially in Bosnia and Herzegovina, which I was able to witness in 2015 with my visit to Mostar and the Catholic sanctuary of Medjugorije. With my focus in international law, I hope to obtain an internship at the International Criminal Tribunal for the former Yugoslavia. My past works relating to the Yugoslav War, democratization in Bosnia and Herzegovina and the legality of Kosovo’s Independence and current internship at the Archives and Special Collections will better prepare me for my future legal career in the international human rights arena.

Without a doubt the wars in the former Yugoslavia are a focal point of contemporary human rights.  The genocide of hundreds of Muslims, the widespread racial discrimination and torture further stresses the need for a better understanding of this tragic conflict. I hope to use this internship as a founding step for my future pursuit of a human rights/international career that deals with the ongoing criminal trials from the Yugoslav wars and also the integration of the western Balkan states into the European Union. 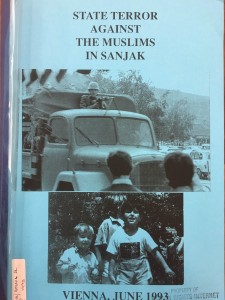 Croatian Community of Herzeg-Bosnia, Ethnic Cleansing of Croats in Bosnia and Herzegovina 1991-1993, Box 403.

Sells, Michael A. The Bridge Betrayed: Religion and Genocide in Bosnia, Box 403.

State Terror Against the Muslims in Sanjak, Box 403.