Currently on display in the John P. McDonald Reading Room at the Archives & Special Collections: Convention!: An Exciting and Educational Board Game Created by Homer and Marcia Babbidge 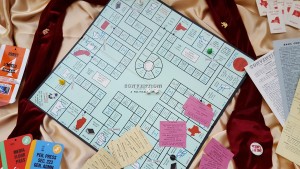 was an Assistant for Higher Education in the U.S. Office of Education. To whet his appetite for the game of politics, in the midst of the 1960 Presidential campaign, he and his wife, Marcia, invented a board game published by Games Research, in which the players seek to accumulate enough delegates to win the nomination. 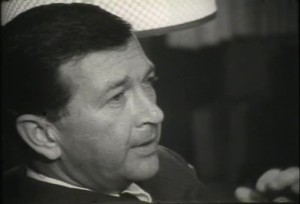 The UConn University Archives has recently acquired two editions of this long-forgotten game for its collection, thanks to Norman D. Stevens, Director of University Libraries Emeritus. When Norman became aware of the game, he contacted David Beffa-Negrini (Class of 1976), a noted jigsaw puzzle maker and an active game collector. Mr. Beffa-Negrini immediately located the two copies of the game currently on display and generously donated them to the Archives.

The probable first edition of the game includes a colorful tube which contains a rolled paper game board sheet and two instruction sheets, game pieces, dice and score sheet. The likely later edition is a typical board game housed in a cardboard box containing the game board, similar in many ways to Monopoly™. Convention!, which reflects the Babbidge’s fondness for satire, is much more volatile than any other board game. As one newspaper reporter who played the game wrote, “It is filled with all sorts of pitfalls and windfalls whereby a player might lose or win delegates. One neighbor lady…had won most of the primaries and was pressing in for the kill. I was down to a few delegates and was about to withdraw. Then I remembered a maneuver that Babbidge had told me about but which I had neglected to mention while explaining the rules. In one stroke I had captured enough delegates from the other players to win the nomination.” It was also reported that John F. Kennedy had a copy of Convention! on his campaign plane but how well he was doing was a secret.

In addition to the spaces around the board, through which delegates may be lost or won, there are seven caucuses, leading from a perimeter space that candidates may enter in hopes of winning more delegates. In the New York caucus a candidate can win votes for landing on the Wall Street Likes You space, or lose them for landing on the Greeted by a Bronx Cheer space. It can be the desperation move mentioned above for, if a player chooses to enter the Smoke Filled Room, on 2 of each six spaces the Bosses Approve, Disapprove, or Ignore you. Approval garners the player half of the Uncommitted Delegates held by each other candidate but Disapproval eliminates the player from the game.

Exhibit contents are from the Papers of Stuart Rothenberg and Herman Wolf and recent donations from Emily Roth (Class of 1965), Bill Heath and Henry Krisch (Professor of Political Science).

Curated by A. Gabrielle Westcott and Betsy Pittman