He attended  Yale College and graduated in 1910.  Like many of his generation, Leavenworth joined the Army in 1914 and saw action along the U.S. –  Mexico border prior to joining the American Expeditionary Force in  France in 1918.

While in France he served as an officer and the documents in his papers reflect the range of his responsibilities as part of the “Fighting Yankee Division.” 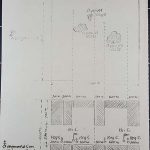 Plans for action in the field

While he was abroad, Leavenworth received correspondence from friends and family.  Sentiments throughout the correspondence he received, from 1917 until his return to the States, resonate with the unified effort the entire country was undergoing to support the war effort, both home and abroad.

Many wrote of their personal contributions to the war effort while others conveyed pride and gratitude for Dana’s service. His future bride applied for service in both the Red Cross and Y. M. C. A. War Service, similar to other women, anxious to do their part. 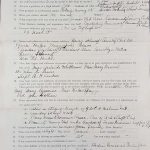 15 September 1918, Carlton Redmond having moved to the Washington, D.C. area writes, “I simply got desperate, while I was giving considerable of my spare time to war work for the past year, I wanted to do more…”  And in another letter on 24 October 1918,  “I am working very hard to aid in the production of Ordnance for you boys.”

Another friend wrote on 18 November 1917, “Everyone is busy—Ladies with their knitting and at Present the men are in the throes of a YMCA campaign raising money to promote them in the army corps and at the front for in them we figure is the big saving influence of the men.”

Antoinette Pierce wrote on 14 November 1917, “You don’t know how you soldiers are the center of all our thoughts nor how proud we are that our defenders in these hard times are of the sort we can safely rely upon in every need.” 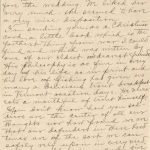 The activity on the home front is highlighted in the 6 December 1917 letter from Pastor Charles A. Dinsmore, “Waterbury is about the same as usual. We are very busy, raising money most of the time for the Red Triangle, the Red Cross, and just now it is the Knights of Columbus.  Personally, I am kept pretty busy as chairman of the Waterbury Red Cross, as a member of the local Council of Defense…the girls are all working in the Red Cross.  There seems to be no fun going on anywhere.”

Chalmers Holbrook writes on 9 January 1918, “Who knows but by this time you are tasting the trenches and the wildest stretch of the imagination cannot see it as you do because we never know what reality is until we actually experience it.”

Dana was one of the fortunate ones to survive the war, returning to the States in 1919 and resuming his civilian life. In 1924, he married  Marie Christina Schmitz, daughter of  Charles W. Schmitz of Waterbury and continued his employment as an estate councilor at  Connecticut Mutual Life Insurance Company.  Dana and Marie established their household at 25 Staples Place in  West Hartford, Connecticut. There they raised three sons, Robert, Donald and Alden.

is one of several World War I themed exhibitions on display in Babbidge Library and the Dodd Research Center this Spring, marking the centennial of the official involvement of the United States in World War I. The United States Congress declared war on the German Empire on 6 April 1917.