Lifting the Veil: A Photographic Archive of Child Labor in Light Manufacturing 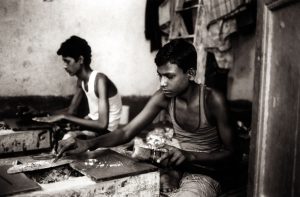 A young boy puts glass ornaments onto bangles to be sold in the United States and Europe. Child workers are chronically tired from long hours and irregular rest, increasing probability of disease and malnutrition.

From silver gelatin processing of the 19th century to 4k Ultra-High-Definition film of the 21st, photography has served not only to illustrate and document human activity but to also demonstrate and agitate on behalf of its subjects.  Likeminded activists and journalists have similarly sought to employ the camera as a tool for advocacy to change policy, discourse and public perception around past events which inform our future as consumers in a global capitalist world.  Curated and on display in this exhibition are photographic works from light manufacturing industries and the workers they employ as documented through the lens of photographer and documentarian U. Roberto (Robin) Romano.  In particular, the role of children at work remained a constant feature of Robin’s photography and film which became a hallmark of labor activism beginning in the early 20th century with the work of Lewis Hine.  In Robin’s eyes, acceptance of shared concerns across cultures and corners of the globe became the starting point for making concrete change, which he portrayed through photography as his device for “lifting the veil of perceived evil that comes from bias and stereotyping.”  His framing of the inherent concerns in society drew him to document the most vulnerable elements, “I think there is an a priori appreciation that we have within us of a sense of our common humanity. It seems to me it takes a lot of work and a lot of noise to create environments that forget that. And as a result, we are suffering the consequences of our forgetting.”[1]

The U. Roberto (Robin) Romano Papers consist of approximately 50 linear feet of research and project files, 150,000 digital images, 50,000 film negatives, 450 digital videocassettes and over 75,000 work prints.  Drawing from the tradition of art as advocacy through his father’s Works Progress Administration murals, and the history of photography through Hines’ merging of activism and visual culture in the early 20th century, Robin worked to document the worst forms of child labor through 21st century mediums of photojournalism.  In addition to the resilient subjects of Robin’s photographs, his collection extensively documents the transition from film to digital photography.  His early adoption of digital media and portable storage devices represent the adaptability of his photographic process as well as his need for utility media in the field.  Shooting with multiple cameras at a time, Robin employed several different perspectives to portray a single subject for effect and illustration of the purpose at hand:

The documents, prints and film produced by Robin in his life’s work also demonstrate the preservation challenges of a personal archive housed on microchip and digital video tape.  With an increasing growth in storage capacity and declining rate of media life expectancy, the modern photographer relies on duplication and reproduction.  The transition in Single Lens Reflex analog photography to rapid shot digital exposures allowed for a multitude of images on a single subject, however still requiring the editing, selecting, printing and filing of any analog photography archive. 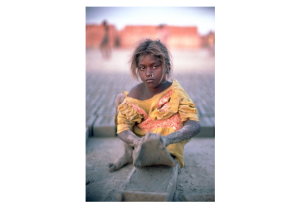 A 9-year-old girl trafficked from a catchment area in neighboring state pulls excess clay from a brick form. The discoloration in her hair is due to vitamin deficiency from a poor diet and long hours of exhausting work in 100 degree temperatures.

The majority of images on display were taken in India from the Stolen Childhoods (2004) project which was the first global documentary film based on child labor.  Focusing on light-manufacturing, this exhibition seeks to lift the veil not only on the evidence of child labor in this sector, but also on the incredible volume of imagery required to garner the symbolic images you see before you.  The role of the single image, or “Bonded Child Laborer at a Brick Kiln” and “Young Boy Makes Light Bulbs” as catalyst, which propels provocation to action.  Robin’s attention to the subject, as demonstrated in the Brick Kilns of West Bengal, out of the many angles and motions, black and white to color, sizes and stills, represents the multitude of the archive.  These images that were left on the proverbial digital cutting room floor, perhaps to be taken up as those less remembered, retain their strength in gaze, emotion and symbolism for discovery into the deeper processes of advocacy aesthetics and the act to archive toward empathy.

This exhibition is curated by Brooke Foti Gemmell and Graham Stinnett in conjunction with the Business & Human Rights Initiative “Protecting Rights at the End of the Line: Stakeholder Engagement in Light Manufacturing” Conference, October 5-6, 2017.