In the waning days of June, Dodd’s projections for the end of the defense and cross-examinations fluctuated wildly.  “Today von Neurath finished his own direct examination the British finished their cross. The Russians will consume a few hours tomorrow (for no good reason except home consumption — they do it all the time and have very much delayed the trial).” [p. 332, 6/25/1946]  The excitement of nearing the end enabled Dodd to get through unnecessary posturing before the court, only to have progress derailed yet again.

“Saturday, the court sat until one p.m. and we finished the last defendant! We all feel we passed a great milestone. However we are now bogged down again. You will recall that the Russians insisted on inserting in the indictment the charge that the Germans murdered 11,000 Polish officers who had surrendered in the Katyn forest new Smolensk. Of course the Germans have always claimed the Russians did it. Now we must hear three witnesses for each side…For my part I think it is a toss up — they are both capable of it. Both had motive for the crime…Yesterday the testimony of the Russians and Germans continued. It sounded like a coroner’s inquest — corpses, skulls, condition of bodies, vital organs, decomposition, etc. I still say a plague on both of them.” p. 333, 7/1/1946 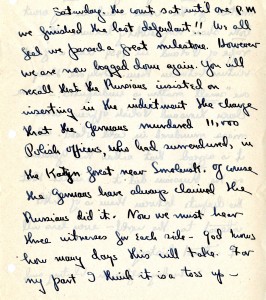 Hope resurfaces as spring eased into summer in Nuremberg.