Tom Dodd began what would be a very long letter to his wife on 16 July 1946.  Acknowledging that it had been several days since his last letter, Tom continues, “we have been working on the final speech of the Justice and it has been close work and tiring, too.  As far as the trial goes there is really little new–the defense final arguments go on.  Today we are through with more than ten of them and we may finish all by the end of this week.” [p. 335, 7/16/1946]  Speculating on the conclusion of the trial is premature given the variables of the situation is the conclusion to be drawn from Tom’s letter as he continues to report on his activities and the overall atmosphere of the Court. 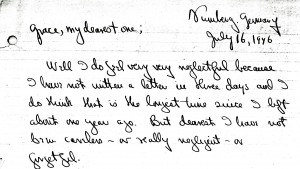 “The defendants reflect the ending of these proceedings.  They seem to feel that the days are definitely numbered.  Even Göring, who has been positively impish up to very recently, now is gray and crest-fallen. Keitel wears the mask of the doomed already.” [p. 336, 7/16/1946]

It seems as if everyone associated with the Trial senses its conclusion is near, and yet it is not yet over.  The uncertainty with which all involved began this great experimental endeavor remains, not the least of which is the verdict.