70 Years ago today, Justice Robert Jackson delivered his final presentation of the trial before returning to the United States. According to Tom Dodd, “He has a great style, notable for its clarity and simplicity. In my judgment, his argument will take its place among the great arguments that have been made in great cases.” [p. 340, 7/28/1946]

As the trial winds down, Dodd has the opportunity to write longer letters home. 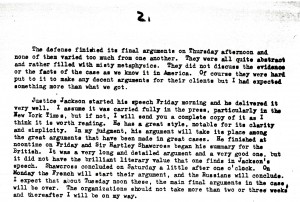 The focus of these letters wanders from personal updates of possible post-trial plans, comments on summer activities for the family back home in Connecticut, dinners and celebrations in Nuremberg and personal observations of the departing staff with whom he has worked so closely over the past months. Throughout his writing, the heavy burden of steering the course of the trial for the U.S. and almost overwhelming sense of frustration that had clouded his letters of the past several months can be seen to be lifting. Soon, soon he will be going home.