On 17 August, Tom wrote to his dearest Grace, “The past week has dragged.  I had hoped to close the testimony by today but now it looks like another ten days or two weeks.  But I believe the judgment will come down very quickly.”  He continues to work on his final argument, but “Once I get the argument finished, all else should be easy sailing.” [pp. 346-347]  As if the mention of sailing has called up fond memories, he continues,

The summer is nearly over–a second summer away from you.  How I miuss that time in New England and how I wish I could be there just for this weekend.  I simply refuse to fix my departure day–even for myself.  I cannot tell yet.  It cannot be too long. 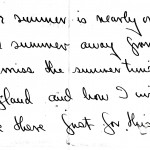