10 August 1946 marked the two hundredth day of the International Military Tribunal at Nuremberg. Over the course of the past months, millions of pages of documentation had been collected and distributed, thousands of pages of recorded testimony had been recorded and hundreds of witnesses brought before the court. This morning saw the continuation of the testimony of Field Marshal Erich von Manstein, Commander-in-Chief of Army Group South. Similar to others testifying regarding the Nazi organizations indicted, von Manstein supported the claim that the German armed forces were not to be held responsible for the atrocities committed during hostilities. 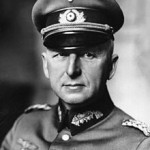 Given his activities as one of the primary commanders at the Battle of Kursk and his counteroffensive in the Third Battle of Kharkov, which regained substantial territory and resulted in the destruction of three Soviet armies and the retreat of three others, it is interesting to note that his ongoing disagreements with Hitler over the conduct of the war led to his dismissal in March 1944. [https://en.wikipedia.org/wiki/Erich_von_Manstein, accessed 8/10/2016]
Dodd’s earlier correspondence of 6 August documents his resignation regarding the pace of the trial, “We finished our part of it in jig time–but as usual the British have 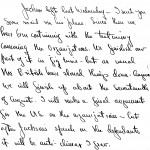 slowed things down…Anyway, we will finish about the seventeenth of August.  I will make a final argument for the U.S. on the organizations–but after Jackson’s speech on the defendants it will be anti-climatic, I fear.” [p. 343]  By the 10th, he was still working on his argument but the pace of the trial continued, slowly.  “I am busy getting a final argument ready on the organizations.  It is a great chore and there is so much to cover.  On the other hand it does mean the end and with four lawyers all making final arguments there will be much repetition.  So I fell a little “ho hum” about it.” [p. 345]

He makes no mention of his expectation to present his argument the following week as he had predicted on the 6th.