On September 1, 1946, Tom Dodd wrote his wife to reassure her that he was not neglecting her but that the “last few weeks have been very difficult” for him with Justice Jackson gone. Dodd has had “to carry on in court and take care of the many matters that he [Jackson] handled outside of court and the entertaining alone has been killing.” [p. 349, 9/1/1946]  With his final presentation to the court completed on 29 August, Dodd began wrapping up his responsibilities–especially the exchange of social obligations amongst the members of the prosecution teams.  Despite the pressures associated with the coming conclusion of the trial, Tom reminded Grace that he plans “to get away from here just as soon as the trial is over with–that is, when the sentences are pronounced.” [p. 350-351, 9/1/1946]While the Court heard final statements from the defendants and indicted organizations, 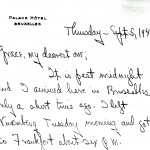 Dodd took a whirlwind tour of Europe. Traveling first from Nuremberg to Frankfurt, he arrived in Brussels late on September 5th having driven down the left bank of the Rhine River before heading on to Luxembourg.  Remarking on his “caravan”, Dodd wrote that his was “traveling in a sixteen-cylinder Mercedes-Benz” convertible formerly owned by Ribbentrop and was accompanied by his bodyguard as well as a jeep and trailer with their luggage.  Pausing to meet with American officials in several stops along the way, he planned to continue on to the Hague in Holland.  “It seems so good to be out of Germany and all its rubble and ruin and rottenness.” [p. 352, 9/5/1946] 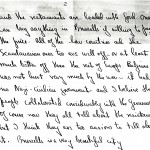 Writing from Wassenaar, Holland, on September 9th, Dodd remarks that “Brussels is positively ‘lush’–the shops are filled with all kinds of goods and the restaurants are loaded with food.  One can buy anything if willing to pay the price.  All of the low countries and the Scandinavian ones too are well off–or at least much better off than the rest of Europe.” [p. 353, 9/9/1946] After touring the Nazi fortifications along the North Sea, Dodd travelled on to Switzerland, his conversation with Grace turning to Connecticut politics and the potential career he might explore.

Dodd reached St. Gallen, Switzerland, by 14 September where communications from Connecticut awaited him.  Informed by Brien McMahon that the he wouldn’t be considered for the nomination for governor and encouraged to run for the Senate, Tom writes that he’s made his decision and he’s glad about it. “I feel free–I do not want to run.  Although I would have tried for the governorship.” [p. 355, 9/14/1946]

The majority of the letters from Tom Dodd to his wife Grace have been published and can be found in Letters from Nuremberg, My father’s narrative of a quest for justice. Senator Christopher J. Dodd with Lary Bloom. New York: Crown Publishing, 2007. Images available in Thomas J. Dodd Papers.