Tom Dodd’s travels continued throughout September 1946.  After leaving Switzerland, he arrived in Cannes, France by September 19th.  Writing home, he notes that “Cannes is a very, very lovely place.  Everything you read about the brevity of the female bathing suits is true–and worse.  They are all practically nude–really.  I am more accustomed to it tonight–after two days on the beach–but the first session had all of us a bit uneasy.” [p. 355, 9/19/1946]  Sunbathing was left behind as they toured Nice and on to Monaco.  Tom found the casino a “fascinating experience” filled with characters that one might find in novels–old crones, bearded gentlemen and flashy cosmopolites. 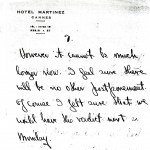 Unfortunately, his letter concludes with the information that the “trial–or better, the verdict–has been put over for one week.  Jackson arrives in Paris tomorrow morning. He had already started when the delay was announced.  I am really quite disappointed about the delay–it has been so long.  However, it cannot be much longer now.” [p. 356, 9/19/1946]

His travels complete, having decided against visiting Denmark, Norway and Sweden before returning to Germany, Tom pens his last letter to Grace from Nuremberg.

this is probably the last full-dress letter that I will write to you from Germany.  We know now that the verdict will come next Monday and Tuesday.

Justice Jackson was here when I got back [from Cannes].  We had a long chat and he told me how much he appreciate what I had done…I expect to leave here Tuesday, as soon as the sentences are given, and will drive to Frankfurt and spend the night with Margie and Joe.  I will leave Frankfurt early the next day for Bremerhaven and sail within a few days…[pp. 356-357, 9/26/1946]

Dodd’s work was done and his role on the world stage at Nuremberg was almost at an end.  It was with great eagerness that his attention turned toward Connecticut and family–it was time to go home.