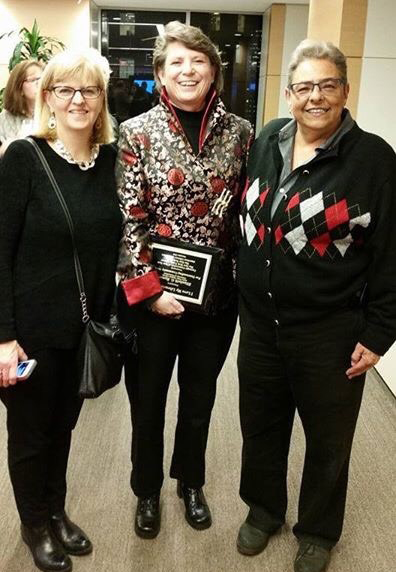 Our own Beth Rumery, library director for the Avery Point Campus Library, received the I Love My Librarian Award for her outstanding public service to the community and ongoing commitment to transforming lives through education and lifelong learning. Rumery was one of only 10 librarians within the United States recognized this year for this esteemed honor.

Beth was nominated by Sue Shontell, the Executive Director of the New London Housing Authority for her outreach efforts both to students and faculty at UConn and the community at large. With physical changes to make the library more inviting and a safe location for students to come and discuss issues with sexual orientation, depression and other difficult personal issues, she has created a sense of place within the library. She has also been an active member of the greater Groton community, reaching out to the low income elderly and disabled housing authority and their families. According to the nomination, her work has “opened university speakers to staff and families as a way to reach them and show that they too can go to school, not be intimidated by campuses and connect with their lives.”

As part of the award process, library users nationwide are invited to nominate their favorite librarians working in public, school, college, community college and university libraries. This year more than 1,300 library patrons submitted detailed stories showing how their librarian had an impact on their communities and lives by connecting people with the information access and critical resources they need to succeed in today’s digital age.

Beth received her award, which includes a $5,000 prize, last week at a ceremony in New York City. The event was hosted by Carnegie Corporation of New York, which generously sponsors the award along with The New York Public Library and The New York Times. For more information and a copy of the nomination form, please see ALA’s website at http://www.ilovelibraries.org/lovemylibrarian/2015/15winners