In the culture of the Internet, every organization needs to have a visual identity and a tag line. At the CTDA we are developing that visual identity a little at a time. Our first step was to create the minimalist wordmark that was our acronym. This minimalist approach was purposeful. The CTDA is meant to be a service and a resource that others use to preserve and make available their digital material. We wanted something that said who we were but didn’t require a lot of interpretation and did not compete with the content that the CTDA would deliver through the various presentation layers that would leverage CTDA content. 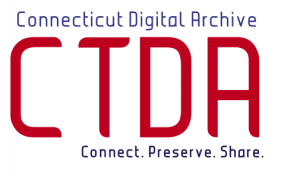 As we began working with partners beyond our small implementation group, we found that of course no one knew what CTDA stood for, and in a world of silos and “complete solutions” people did not immediately understand what services we provided.  We are happy to explain that the CTDA is not a destination, but a service that organizations use to preserve their digital content and to make that content available to many presentation applications. The CTDA doesn’t itself own any content, rather it is a means of connecting organizations to preservation services so that they can share those resources with each other and the world.

As this understanding became clearer in our own minds, we got to thinking about how to better express our new sense of the service in a sound bite. We decided that we would alter the wordmark and add a tagline that succinctly explained us.  Easier said than done. After much debate and discussion we chose the three words you see above: Connect. Preserve. Share. Our mission is to Connect participants to preservation services,. We Preserve digital content and metadata for the long term, and we make it possible to Share that content with each other, and with national aggregators like the DPLA.

So there you go. I just took 300 words to say what we hope our tagline says in just three.