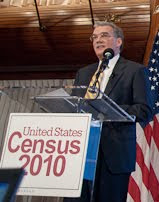 U.S. Census Bureau Director Robert M. Groves will brief the media on 2010 Census news, releases and products. Groves will discuss quality indicators and the completion of all releases of 2010 Census redistricting data, and he will announce the site of the new national mean center of population. The briefing will include the release of the first two 2010 Census briefs — population distribution, and race and ethnicity — and a question-and-answer session.

Members of the media may also participate by telephone.
(Please dial-in early to allow time for the operator to place you in the call.)

Dial-in number: 888-390-1046
Password: CENSUS
(For security reasons, the passcode will be required to join the call.)

Online Press Kit:
Event materials will be posted online shortly after the event begins and can be accessed by clicking on the 2010 Census Operational Press briefing at http://2010.census.gov/news/press-kits/operational-press-briefing.

Webcast:
There will be a live webcast of the briefing, accessible at http://www.visualwebcaster.com/event.asp?id=77517 at 2 p.m. (EDT) on event day.