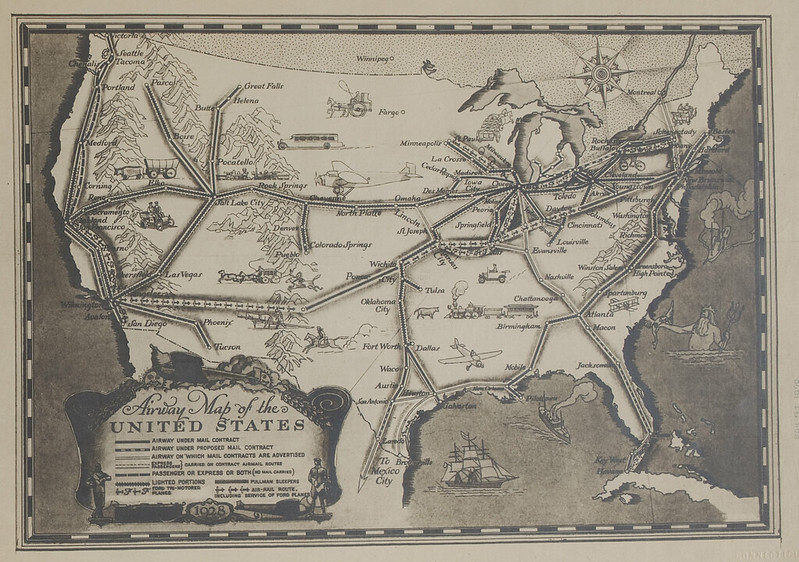 Today in the United States we can fly coast to coast in a commercial airliner comfortably in less than 6 hours. Air travel has not always been this easy or seamless. Historical air navigation techniques and practices can help us envision the beginnings of air travel and air mail, and really show how drastically aviation navigation technology has evolved in just over 100 years of flight. To help relive and appreciate air navigation from the onset of commercial flight, the University of Connecticut Libraries Map and Geographic Information Center (MAGIC) brings you an interactive index to help users identify flight routes commonly used for passenger and air mail service in the 1920’s and 30’s. Back then there was no such thing as hitting the direct button on your Garmin and following the pink line to your destination!
The creation of this historical aeronautical navigation chart index provides pilots and aviation enthusiasts with a glimpse into how far air navigation methods and technology have progressed since the inception of powered flight. The University of Connecticut Map and Geographic Information Center (MAGIC) includes an extensive collection of navigation charts spanning in time from 1923 through 1935. There are more than 150 charts in the collection that span across the contiguous United States. Pilots at the time used the charts for navigation purposes including airmail delivery and the first commercial passenger service provided by the Ford Tri-Motor aircraft. Ford Motor Company produced an artistic route overview map in 1928 that is contained in the collection.
When the collection was digitized by the University of Connecticut Libraries in spring of 2011, Trevor was in the process of trying to procure an internship as part of my undergraduate major in Geography for fall 2012. When Trevor mentioned his interests and background to the staff at MAGIC, immediately a project was identified to georeference and create an interactive index for the collection of historical air navigation maps from MAGIC’s collections. The project focused on developing an interface for fellow pilots and enthusiasts to access and appreciate these relics of aeronautical navigation technology that bear many striking resemblances to aeronautical sectional navigation charts of present day. In preparation for this project, the historical navigation charts would be digitized using a high-resolution camera in multiple sections over the summer of 2011 to be later digitally reassembled. For more information on the digitization equipment utilized by the University of Connecticut Libraries visit: http://digitalcollections.uconn.edu/equipment/equipment.html.

In the fall, Trevor began the process of creating mosaics of two images captured for each chart. After a mosaic was created and the complete charts were saved in raw uncompressed TIFF format, they were ready to be georeferenced. Georeferencing the image provides a way for each map to be overlaid within GIS software applications, Google Earth, Google maps and other applications in a spatially meaningful way. Trevor Utilized Adobe Photoshop to convert the JPF files from the digitized original photographs to TIFF images, and then created mosaics of the full charts. It was a slow and tedious process and had to be done with great care so that the georeferencing would go smoothly and with minimal error. It took an entire semester and a few weeks of another semester to complete the mosaicing and georeferencing of each image. Once this was completed the files were digitally archived.
To make these maps accessible to the public, an index was created to enable users to easily locate and identify maps for specific routes. To create this index, ESRI’s ArcGIS ArcMap 10 software was used to create a shapefile based on the geographic extent of each map. Then this shapefile was converted to a Keyhole Markup Language (KML) file for viewing with Google Earth and Google Maps. The KML file was then uploaded to Google Fusion Tables and joined to a spreadsheet that included links to each air navigation map. To ensure the index interface was easy to use, the Google Fusion Tables map interface was customized using the Google Fusion Tables API to develop custom dropdown menus and to refine the appearance of the map. This index will enables users to locate and download full-quality georeferenced images of each map and will be the first time that these historic air navigation charts will be easily identified and made available for public viewing and use.