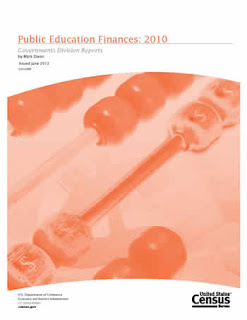 The nation’s elementary-secondary public school systems spent an average of $10,615 per pupil in fiscal year 2010, up 1.1 percent from the previous year, according to statistics released on June 21, 2012 by the U.S. Census Bureau. The state of Connecticut’s public schools spent $14,906 per student in 2010, placing Connecticut 7th in the nation in per student spending in 2010 with the District of Columbia public schools having the highest per student expenditure of $18,667 in 2010. A complete table with rankings by state is available from the U.S. Census Bureau (See table 11. Excel | PDF).

These updated statistics are included in the U.S. Census Bureau’s Public Education Finances: 2010 report, a report the provides data on revenues, expenditures, debt and assets of elementary and secondary public school systems from across the nation for the 2010 fiscal year. The tables include detailed statistics on spending — such as instruction, student transportation, salaries and employee benefits — at the national, state and school district levels.

Other highlights from this report include:

View the complete report and download data in excel format at: http://www.census.gov/govs/school/
The data used in the tabulations came from a census of all 15,345 public school systems. As such, they are not subject to sampling error. Although quality assurance methods were applied to all phases of data collection and processing, the data are subject to nonsampling error, including errors of response and miscoding. For more information, visit the Census Bureau’s website at <http://www.census.gov/govs/school/>.