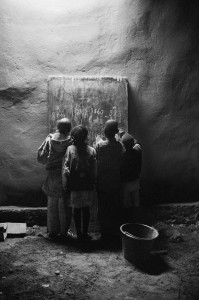 The University of Connecticut community is saddened to learn of the passing of award winning photographer U. Roberto (Robin) Romano.  Romano was a photographer, filmmaker and human rights educator. The son of the artist and Works Progress Administration (WPA) muralist Umberto Romano, Robin Romano was born in New York where he attended the Lycee Francais,  Allen Stevenson School and Horace Mann High School. Mr. Romano graduated from  Amherst College as an Interdisciplinary Scholar in 1980.  Working closely with the Human Rights Institute and Archives & Special Collections, Mr. Romano began depositing his personal papers with UConn in 2008.

Romano began his career in documentaries as a producer and cameraman for Les Productions de Sagittaire in Montreal, where he worked on several series including 5 Defis and L’Oeil de L’Aigle.

His film projects include: Death of a Slave Boy, a two-hour special shot in  Pakistan for European broadcast,  Globalization and Human Rights hosted by  Charlayne Hunter Gault for  PBS,  Stolen Childhoods, the first theatrically released feature documentary on global child labor,  The Dark Side of Chocolate, a feature documentary on trafficking in Western Africa, and  The Harvest/La Cosecha, a feature documentary on child migrant laborers in the United States for which he won the Shine Global Award. He was also a contributor to the NPR and  BBC specials on slavery in the  Ivory Coast and has contributed to films as diverse as  In Debt We Trust and  Darfur Now.

As a still photographer, his exhibition “Stolen Childhoods: the Global Plague of Child Labor,” was on view at the William Benton Museum of Fine Art at the University of Connecticut in 2006. He has been the photographer for Rugmark, a foundation working to end illegal child labor in the carpet industry) and to offer educational opportunities to children in South Asia, as well as GoodWeave (the iconic photos of child rug weavers in Nepal.  Additionally, Romano created the mural and poster for the Council on Foreign Relations announcing their universal education campaign. Other organizations that have used his work include  Human Rights Watch,  Amnesty International,  Free the Slaves,  The International Labor Organization,  Stop the Traffik,  The Hunger Project,  International Labor Rights Forum,  The Farm Labor Organizing Committee and  Antislavery International. His work has appeared in such publications as The Ford Foundation Quarterly, The Stanford Review,  Scholastic, and  UConn Magazine, and has been seen on billboards and posters around the world. Romano has appeared as a guest on Nightline with Ted Koppel as well as Newsnight with Aaron Brown.  He was recently active As an advocate for and an authority on children’s and human rights, Romano appeared at many forums, schools and universities. He gave the Frank Porter Graham Lecture at the Johnson Center for Academic Excellence, University of North Carolina, and the Gene and Georgia Mittelman Distinguished Lecture in the Arts at the University of Connecticut. In 2007 he was invited to give the plenary speech at the Association of Farmworker Opportunity Programs annual conference in Coeur d’Alene. He has also lectured at the Rhode Island School of Design and the Oak Institute for International Human Rights at Colby College.

Robin Romano will be greatly missed by all those he has touched at UConn. 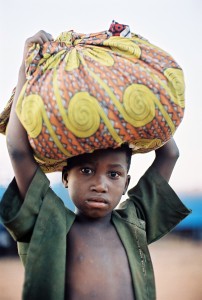 (Images from the Robin Romano Papers, used with permission.)