Archives & Special Collections is pleased to announce the online availability of the papers associated with the trial of the Nazi major war criminals found in the Senator Thomas J. Dodd Papers.  Formal announcement and remarks regarding the Digitization of the Nuremberg Trial Papers of Senator Thomas J. Dodd will take place on November 13, 2013, from 3:00 – 4:00 pm in the Reading Room, Dodd Research Center. 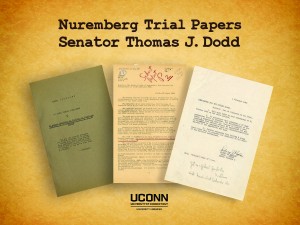 Dodd served as Executive Trial Counsel and supervisor of the U.S. prosecution team at the International Military Tribunal at Nuremberg from July 1945 through October 1946, where he shaped many of the strategies and policies through which this unprecedented trial took place. Representing a small proportion of his entire collection housed at the Archives & Special Collections at the University of Connecticut, Dodd’s Nuremberg papers contain documentation relating to the proceedings of the Nuremberg Trials that are available nowhere else, including hand annotated drafts of trial briefs and annotated translations of German documents.  Found in Series VII of the Thomas J. Dodd Papers, the documents have been heavily used by scholars from around the world since they were opened to the public in 1997.

The nearly 50,000 pages of documents in the Nuremberg papers will be digitized over the next two years and made available through the Connecticut Digital Archive, a joint program of the UConn Libraries and the Connecticut State Library. Explore the Nuremberg Trial Papers at http://archives.lib.uconn.edu

This event is being held in conjunction with the award of the 6th Thomas J. Dodd Prize in Internal Justice and Human Rights to the Business and Human Rights Resource Centre, which will take place at 4:00pm in Konover Auditorium, Dodd Research Center.