All writers are familiar with the concept of “every word counts.” For writers of children’s picture books and beginning readers, every word literally counts. Most picture books published today have about 300 words. Many editors won’t even read a picture book manuscript much longer than that. Level 1 beginning readers are even shorter, with about 100 words. Keep in mind that, despite the low word count, a good story needs an arc, a plot, humor, and character development. It might seem like these stories are written quickly, and perhaps the first idea is written in a short period of time, but getting the text ready for publication can take many days, weeks, months, or longer to get right. Each word and every sentence is reviewed and revised many times. Here are some of the questions an author (and an editor) considers with each word and sentence:

Is the word necessary?

Is it the right word to convey the meaning you intend? (Does the word have more than one meaning?)

Do the challenging words have contextual clues to allow the reader to infer the definition?

Is the word count within the guidelines?

In an early beginning reader, an author needs to follow additional guidelines:

The words need to be simple enough for an emerging reader to pronounce and understand.

Contractions should be spelled out.

The words should be no more than two syllables.

Complex sentences should not be used.

The majority of the words in the text should be repeated, as you can’t introduce too many new or challenging words to an emerging reader.

I’ve been heartened to see that even someone as talented, prolific, and well known as James Marshall didn’t get every word right on his first few drafts. In looking through the dummies and drafts of his stories, I’ve enjoyed seeing his notes and eraser marks as he struggled to search for the best word.

For example, a George and Martha story usually has between 100 -150 words, but there is still much humor and character development packed into each simple story.  In one of my favorites, “The Trick” in George and Martha Back in Town, George can’t resist playing tricks on Martha, so Martha plans a trick of her own. Even at the final galley stage of the book, Marshall was still requesting changes to the text. For example, the sentence

“And when she discovered that the house slippers had been nailed to the floor, she was not amused.”

was changed at the galley stage to: 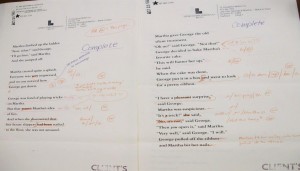 Page from galley, “The Trick” in George and Martha Back in Town (James Marshall Papers Box 8:Folder 161). All rights reserved. No reproduction of any kind allowed.

“And when she found her house slippers nailed to the floor, she was not amused.”

The final sentence is much more succinct and flows better, while still maintaining the humor. Every galley page I’ve viewed has author edits similar to this page.

In the picture book The Cut-Ups Carry On, the cut-ups Spud Jenkins and Joe Turner take dance lessons and end up entering a contest with one of them dressed as a girl. In a dummy for the book Marshall describes the scene as Spud and Joe arrive at the studio for the contest:

At the T.V. Studio, Mary Frances and Charles Andrew Frothingham were just finishing up a superb tango.

At the T.V. Studio, Mary Frances and Charles Andrew Frothingham were just finishing up a dazzling tango.

“Dazzling” is a great choice that combines the essence of both “superb” and “flashy.” 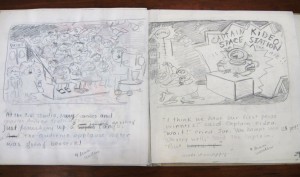 Pgs. 28-29, dummy for The Cut-ups Carry On (James Marshall Papers Box 14:Folder 238) All rights reserved. No reproduction of any kind allowed.

In a dummy for The Cut-Ups Crack Up, Marshall describes Spud and Joe as they speed around town in a “borrowed” car.

At the corner of Maple and Elm, they passed by an astonished Mary Frances and Charles Andrews.

In the final version, “passed” was changed to a much better action verb: “sailed.”

At the corner of Maple and Elm, they sailed by an astonished Mary Frances and Charles Andrew.

Again, this is a very simple word change that greatly improves the sentence.

In the dummy for the beginning reader Three Up A Tree, the story begins with the characters looking at a tree house:

Some big kids down the block had made a treehouse.

Some big kids down the street had built a swell treehouse.

Three word changes, “block” to “street”,  “made” to “built”, and the addition of “swell” give this sentence a boost. Now the reader can imagine the kids building a treehouse, and adding “swell” shows how much they admire it.

Marshall paid so much attention to words that he even made suggestions on other author’s manuscripts that he was illustrating. His notes and papers make it clear that he shared suggested changes to words and sentences with the authors Harry Allard (of the Miss Nelson and the Stupid series) and Jeffrey Allen (Nosey Mrs. Rat, Bonzini, and the Mary Alice stories).

In Nosey Mrs. Rat the story begins with Mrs. Rat spying on her neighbor in the bath. Allen’s original manuscript read:

“I see that you are using lilac bubble bath,” Shirley Foster said.

Mrs. Davis stepped out of the bath and locked the window.

Marshall’s suggestion for changing the last line was as follows:

Mrs. Davis pulled down the shade.

This sentence was used in the final text. With fewer words Marshall made a funnier sentence and one that also worked better for the humor in the illustration. It is easier and funnier to show a shade being pulled down than to show a window being locked. 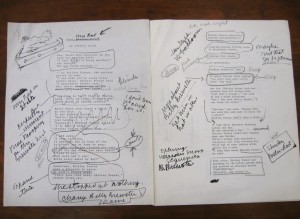 As you can see from the image, Marshall made many suggestions to Nosey Mrs. Rat. Many of them were used, including changing the title and main character from Nosey Shirley Foster to Nosey Mrs. Rat. It is rare for an illustrator to suggest text changes to the author. Most of the authors I know have never had an illustrator suggest changes. It is obvious that Marshall paid just as much attention to words, both his and others’, as he did to his illustrations. Although revising a manuscript over and over again can be tedious, Marshall’s papers and ultimately the success of his books remind me that every revision is worthwhile because every word does count, especially for the youngest readers. That said, I probably could have made this blog post a bit shorter! I will certainly be revising my work again before I send it out.