Archives in Action highlights how archives are being used today. Series author Lauren Silverio is an English and Psychology major and student employee in Archives and Special Collections. 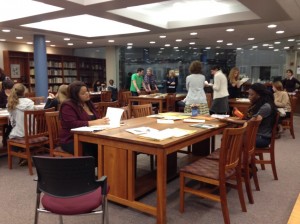 The archives buzzed with excitement last night as Archivist Melissa Watterworth Batt led a short class on little magazines and artists books for the students who are editing and designing the 2015 issue of UConn’s literary and arts journal, the Long River Review.

The visit began with a short tour of the stacks and an overview of the archives. Students scanned the 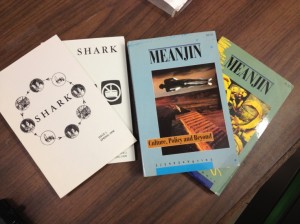 leather- and paper-bound spines lining the shelves on the main floor as Melissa described the wide variety of materials that are housed and preserved in the archives –
books, journals, newspapers, photographs, art, ephemera – and exchanged smiles when they learned that even the UConn Basketball trophies are held in the university’s archives.  Though the students shivered in the climate-controlled stacks, they were attentive and eager to begin looking at the material that Melissa had assembled from the collection.

Melissa set up the tables in the reading room so the material was organized roughly by time period and technique.  Literary magazines from as early as 1912, comics and graphic magazines, and magazines on cassette were set up along the outside of the reading room. 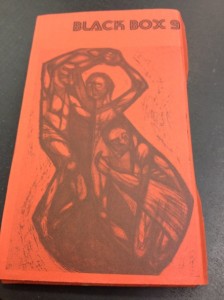 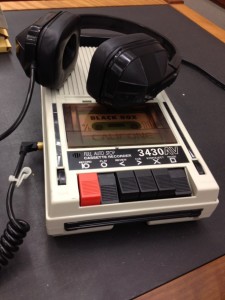 Examples of work from the low-budget “Mimeograph Revolution” of the 1960’s and 1970’s were grouped together next to a table of the more typical magazines of the same time. 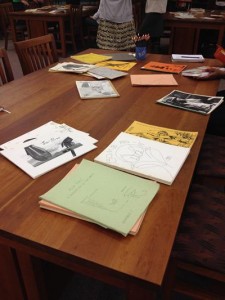 Another table was dedicated to the 1980’s, a time when computer printing and colored print was becoming more popular.

Still other tables held examples of beautiful, one-of-a-kind art magazines with unique methods of printing and assembling the work. These pieces challenge traditional assumptions of what it means to imagine and produce a book or magazine.

Students circulated around the tables for about an hour, pouring over the material and taking notes on their favorite pieces, design inspirations, and manifestos. Melissa guided the students through what they were looking at and was able to answer questions that arose about the time period in which a certain journal was created, the processed used in the production, the historical significance of the magazine, and more. 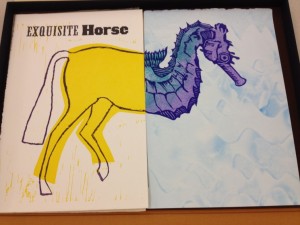 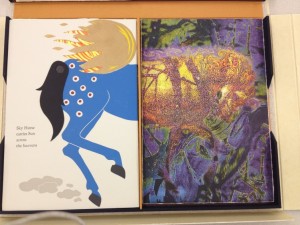 The visit to the Dodd Research Center provided the students with the opportunity to see, hold, and read some of the earliest issues of influential magazines, such as bleb and The Paris Review, as well as the opportunity to learn about publications that never quite made it to the mainstream, such as Black Box and Ker-bloom!.  As a student and the Editor-in-Chief of the 2015 Long River Review, I can speak honestly about the importance of exposure to past literary and art magazine and the boundless inspiration that comes from holding old issues in your hand. 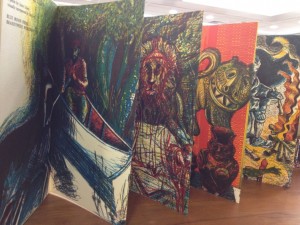 My classmates and I are grateful that the Dodd Research Center is able to house so many incredible pieces of literary history and grateful that we have been allowed to explore them so personally.   I am eager to see where our new thoughts take the LRR.