I grew up in Brooklyn on a diet of the public schools and the Brooklyn Dodgers, spending probably as much time in Ebbetts Field as anybody else did during that period.  I am a violinist.  That’s unusual, I suppose, for two reasons: one, because there are not a lot of violinists in this world, and there are even fewer black violinists. It leaves one feeling a bit like a rare bird. I must admit I didn’t think terribly much about that when I started playing the violin.  I suppose if I had, I probably wouldn’t have done it. 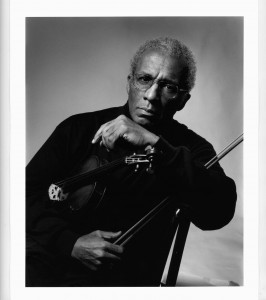 On October 29, 1974, Sanford Allen, one of the first African American musicians to play with a major symphony orchestra and the only African American in the New York Philharmonic since 1964, spoke to a rapt audience at the University of Connecticut.  The recording of his lecture, interview and performance is being preserved and made available digitally by Archives and Special Collections.  The sound recordings are part of a large archive that document a groundbreaking course and performance series led by faculty of the Music Department, Edward O’Connor and Hale Smith, and the Center for Black Studies, entitled Black Experience in the Arts.

Between 1970 and 1990, hundreds of African American artists, actors, musicians, composers, TV producers, dancers, opera singers, poets, historians, critics, and journalists visited UConn at the invitation of Edward O’Connor and Hale Smith.  Smith, a performer and arranger who had worked with jazz greats such as Dizzy Gillespie, Chico Hamilton and the pianist Ahmad Jamal, joined the UConn faculty in 1970.  Originally supported by a grant from the Ford Foundation, Black Experience in the Arts brought Orde Coombs, Conrad Buckner, Stanley Crouch, Edythe Jason, Louise Meriwether, Frederick Tillis, Oscar Walters, Jayne Cortez, Raul Abdul and others to the University, sometimes for repeat visits over the course of their careers.

Stay tuned as we continue to preserve and to make these valuable recordings more widely known and available at archives.lib.uconn.edu