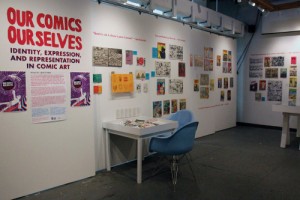 Our Comics, Ourselves at Interference Archive Brooklyn, New York

The Archives & Special Collections at the University of Connecticut will host the first traveling installment of the exhibition Our Comics, Ourselves co-curated by Jan Descartes and Monica McKelvey Johnson.  Premiering at the Interference Archive in Brooklyn, NY in January of 2016, this exhibition featured comics  selections from the Interference Archive collections as well as private collections on loan.  The exhibition includes comic books, graphic novels, DIY comics, and various comics paraphernalia primarily from the United States, 1945 to present. The works range from autobiographical to sheer fantasy, and explore feminism, abortion, racism, cultural identity, social activism, veterans of war, sexual abuse, immigration, public health, civil rights, gender and sexual identity, and more.

The works on exhibit are outside what has been called “mainstream” in comics—in other words, they do not replicate heroic aspirations of a monolithic American boyhood. They do not aspire towards unified idealism. Instead, these are the stories about all of us—either made by us, for us, or in our names. They are complicated, and sometimes messy. By attempting to narrate around mainstream standards and into uncharted territory, these comics let more of us know that we, too, belong to this world and that maybe, therefore, we are also able to participate in and shape it.
UConn’s Graham Stinnett, Archivist for Human Rights and Alternative Press Collections, guest curated a portion of the digital supplement of the exhibition on tumblr featuring materials from the University of Connecticut’s Alternative Press Comix Collection earlier this year. The curated tumblr blog is part of an ongoing contributor driven narration of comic books, personal history and identity.
The UConn Archives exhibition of Our Comics, Ourselves will run from June 14th – August 22nd 2016 in the Thomas J. Dodd Research Center Gallery which is open to the public, Monday – Friday 8:30 – 5pm.