-Guest blog post by Thomas Lawrence Long, Associate Professor and co-curator of the AIDS35 exhibition on display in the John P. McDonald Reading Room, Archives & Special Collections during the months of August and September, 2016.

In 2016 we mark the thirty-fifth anniversary of the first published reports of what would come to be called the AIDS epidemic. Initially identified as rare cancers among gay men, Haitian immigrants, intravenous drug users, and hemophiliacs, AIDS emerged at a moment when a triumphant religious right (organized by the so-called Moral Majority) and political conservatives dominated American media and public life. The convergence of a mysterious infectious disease associated with stigmatized groups or behaviors, on the one hand, and a moralistic neo-liberal social and political movement, on the other hand, created the conditions for competing published representations. These representations invoked divine judgment and apocalyptic anxiety, or critiques of conservative medical authorities and of defunded public health resources. 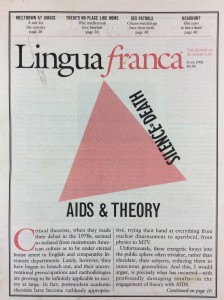 In a paper presented in 1986 at the annual convention of the Modern Language Association and later published in 1988, communication and cultural theorist Paula Treichler, analyzing the representational conflicts surrounding AIDS, observed that “the AIDS epidemic is simultaneously an epidemic of a transmissible disease and an epidemic of meanings or signification. Both epidemics are equally crucial for us to understand, for, try as we may to treat AIDS as ‘an infectious disease’ and nothing more, meanings continue to multiply wildly and at an extraordinary rate.” 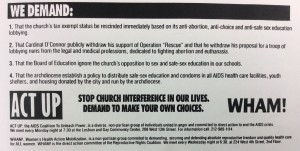 To wrest control of the epidemic’s representational field, AIDS activists, independent queer presses, and AIDS service organizations produced a variety of publications, including safer-sex brochures, tracts and manifestos, zines, and AIDS-themed fiction. Items included in this exhibit come both from Archives and Special Collections and the personal collection of Associate Professor in Residence Thomas Lawrence Long.

Ironically, this year marks another AIDS anniversary: twenty years since the introduction of protease inhibitors and other retroviral drug combinations that turned HIV infection from a death sentence to a manageable chronic infection.

For more information on campus wide exhibitions and programming on #AIDS35, click here.

-Thomas Lawrence Long, Associate Professor in residence in the UConn School of Nursing with a joint appointment in Women’s, Gender, and Sexuality Studies, is the author of AIDS and American Apocalypticism: The Cultural Semiotics of an Epidemic. He is a founding member of the Modern Language Association’s Medical Humanities and Health Studies Forum and an associate editor of Literature and Medicine.