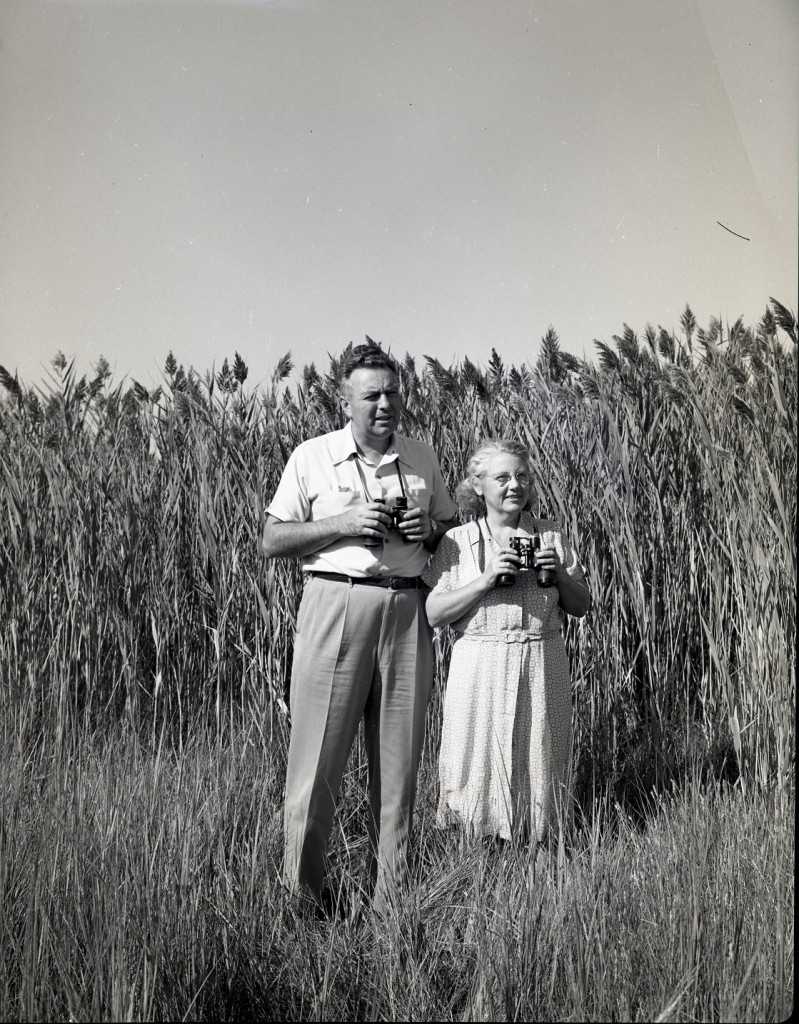 Shortly before American natural history writer Edwin Way Teale died in 1980, he agreed, with his beloved wife and working partner, Nellie Donovan Teale, to donate all of his literary and personal papers and related materials to the University of Connecticut. It was an extraordinary gift. Teale documented his working life and his personal life to an astonishing degree, often keeping several journals concurrently, each with a distinct purpose. For example, from 1938 until 1980, Teale kept an annual daily diary. In 1945, of these diaries he wrote, “These books record the days of the great years of our lives.”[i] These were short but highly detailed records. During the same period he kept these diaries, Teale likewise wrote more elaborated journal entries in Adventures in Making a Living, an unpublished, ongoing narrative of his life. This he called the “book of my heart.”[ii] While here, too, he recorded daily events, frequently overlapping those recorded in the diaries, he also reflected on them in deeper ways. Here, he celebrated the triumphs of his life and reconciled the tragedies. Here, he tried to confer order and sensibility on the world of human affairs, a world that often bewildered him. The ninth and final volume of this 43-year journal was dedicated solely to the final days of his life, beginning with his prostate cancer diagnosis in 1974. Even this most personal and final journey he documented in detail and left as a record. And, these two records of a meaningfully-spent life, as rich as they are, represent only a very small fraction of the materials housed in his voluminous papers.

This year, through the generosity of the Administration and the Board of Trustees of Woodstock Academy, where I have taught for two decades, I have been granted a year-long sabbatical to complete research at the Dodd Research Center, research that will enable me to write a book-length work on Edwin Way Teale. This builds upon three years of generous support of my work by the Archives and Special Collections Department at the University of Connecticut, which has provided me financial assistance through the Rose and Sigmund Strochlitz Travel Grant program. I am very grateful for this support, and for the extensive on-site help of the Archives staff, particularly Melissa Watterworth Batt.

John Burroughs, whom Edwin Way Teale admired greatly, wrote in 1902, “The day inevitably comes to every writer when he must take his place amid the silent throngs of the past.”[iii] While this has come to be the case for Edwin Way Teale—and John Burroughs too—I am not convinced it has to be. Teale has much to offer us now, especially as we face an environmental crisis in which our resource exploitation and waste production cannot continue at current rates without grave consequences for the Earth and, ultimately, for ourselves. Now, as I continue my research within the vast holdings of the Teale Papers and begin the book in earnest, I am both awed by the enormity of the task and excited by the opportunity. Teale’s significant body of published work and his profound impact on the modern conservation movement—particularly through his support of and influence upon many of its principle figures, including Rachel Carson and Edward Abbey—merits reexamination.

The generosity of the Archives and Special Collections staff has extended so far as to allow me to publish a series of representative chapter drafts in this forum as the research and writing processes unfold. These will inevitably evolve as I make new discoveries in the collection. Still, even in draft form, I believe that these chapters can play a meaningful part in bringing the contents of the Teale Papers out into the light of public view, perhaps prompting thoughtful reflection on their importance. I am deeply grateful to the Archives and Special Collections staff for this opportunity, and I welcome public comment and insight on my work here, either through the comment forum on the blog or through direct communication (contact information below). .

On a practical note, the first three chapters to be featured in this forum document events in roughly the middle period of Edwin Way Teale’s life. Though I plan to address Teale’s early life in the book as well, my intuition told me to start where I did, during the period when Edwin and Nellie’s beloved son David, their only child, was serving in Europe late in the Second World War, a period that Edwin called “one of the great crises of our lives.”[iv]

Richard Telford teaches literature and composition at Woodstock Academy in Connecticut.  He has a BA in English from the University of New Hampshire, an MS in English Education from the University of Bridgeport, and an MS in Environmental Studies from Green Mountain College. Working with the Connecticut Audubon Society, he helped design and found the Edwin Way Teale Artists in Residence at Trail Wood program, which he directs.  He was recently awarded a Rose and Sigmund Strochlitz Travel Grant by the University of Connecticut to support his manuscript for a book-length work on naturalist, writer and photographer Edwin Way Teale.