The following guest blog post is by Mary Mahoney, doctoral candidate in the Department of History at the University of Connecticut. Ms. Mahoney received her B.A. in History and English from Trinity College and her M.A.  in History from the University of Connecticut. She is currently completing a dissertation on the history of bibliotherapy, or the use of books as medicine.

Have you ever read a book and felt healed by it?

Most readers can think of a novel that offered some comfort, a poem that presented 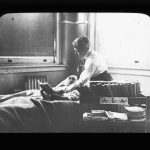 direction, or even a biography that provided inspiration. The notion that books can heal is as old as reading itself but, during World War I, doctors and librarians joined together to apply reading as a form of therapy.

A new exhibit at the Dodd Center, “From Library War Service to Science: Bibliotherapy in World War I” tells that story.

When the United States entered World War I in 1917, troops travelled to the front with the help of massive mobilization efforts to provide weapons, food, and books. The Library War Service, formed by the Library of Congress and the American Library Association, created a national system to collect and distribute books to troops at home and abroad during and after the war. Between 1917 and 1920, the Library War Service distributed approximately 7­10 million books and magazines. The Service built 36 camp libraries to incorporate reading into daily life, and provided library collections to over 500 locations, including military hospitals. 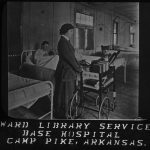 In 1918, the Library War Service stationed librarians in military hospitals to provide dedicated service to the sick and wounded. By 1919, the Service established libraries of approximately 1000 volumes in hospitals without dedicated librarians, and collections of roughly 3,500 in hospitals where a librarian lived and worked on site. There the mostly female librarians wore specially designed uniforms intended to help them fit in among doctors and nurses, and equate their work with the authority of medical professionals. This was important as doctors were often sold on the necessity of books for their patients, but not librarians. “All the army hospitals wanted books,” one librarian noted, “but not all wanted librarians.”

In these hospitals, librarians noted that fiction circulated at an estimated rate of 3 to 1 (to non­fiction). As one hospital librarian noted, “The epidemic of authors is more common than that of disease. Periods of Zane Greyism will be followed by feverish cravings for ‘Tarzanry.” Using the language of disease, this librarian spoke to the desire patients had for books that offered escape, entertainment, and in some cases, consolation. While books in camp libraries primarily offered information about the war or resources to prepare for postwar careers, books in hospital libraries were put to a different use. Yes, books could educate and entertain, but they could also serve as medicine.

“Stories are sometimes better than doctors,” one wartime librarian noted. “Men were brought in from the front, self-control gone, nerves shattered, sleep impossible. A compelling story would often calm them and start them on the road to recovery,” another noted.

Hospital librarians developed this emerging “science” with physicians during the war. “The librarian is often asked by a doctor or nurse to “prescribe” for a patient who is in need of a stimulation which can come from a good book,” one article on the hospital library service explained. But how should librarians prescribe books? What genres made the best medicine?

“Books that take the mind off the war are frequently prescribed by the physicians, and selected reading of a crisp, bright variety proves very helpful,” one librarian observed at the front.

Connecticut’s military hospitals played a role in this history. Louise Sweet, the hospital librarian stationed at United States Army General Hospital No. 16 in New Haven, Connecticut, experimented with matching the right literary prescription to her patients’ needs. Her work posed multiple challenges. During and after the war, the hospital exclusively treated soldiers suffering from tuberculosis.

To “prescribe” books of therapeutic value to these patients, librarians like Louise Sweet 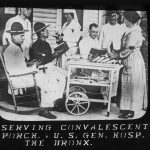 had to consider several potential dangers. Some librarians feared that certain genres, such as detective stories and westerns, could raise the temperature of TB patients or quicken their pulse rates. There was also considerable debate as to whether TB patients should be allowed to read fiction or non­fiction that referenced their disease in any way. Was a healing book one that offered escape from illness, or one that allowed a reader to confront it?

This question, along with the challenge of matching book to patient, continued to shape the emerging practice of what became known as bibliotherapy.

For more information on this exhibit, and on the history of bibliotherapy in Connecticut during the war, please visit the website accompanying the exhibit: http://www.booksasmedicine.com

There, along with more information about the exhibit, you can try your hand at writing your own literary prescription, just like Louise Sweet and other librarians during the war.

From war service to science: Bibliotherapy is one of several World War I themed exhibitions on display in Babbidge Library and the Dodd Research Center this Spring, marking the centennial of the official involvement of the United States in World War I. The United States Congress declared war on the German Empire on 6 April 1917. This exhibit will be on display in Babbidge Library through May 15, 2017.

1 thought on “Bibliotherapy: From library war service to science”