Known as “The Great War” and “The War to end All Wars”, World War I triggered by the diplomatic crisis brought about by the assassination of Archduke Franz Ferdinand of Austria by Gavrilo 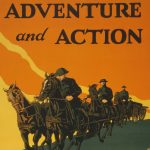 Princip in Sarajevo on 28 June 1914. On 25 July Russia began mobilization and on 28 July, the Austro-Hungarians declared war on Serbia. Germany presented an ultimatum to Russia to demobilize, and when this was refused, declared war on Russia on 1 August. Germany then invaded neutral Belgium and Luxembourg before moving towards France, leading the United Kingdom to declare war on Germany on 4 August.

At the outbreak of the war, the United States pursued a policy of non-intervention, avoiding conflict while trying to broker a peace. In the face of repeated attacks at sea and unsuccessful attempts to mediate a settlement, President Wilson warned the German government that the United States would not tolerate unrestricted submarine warfare, in violation of international law. 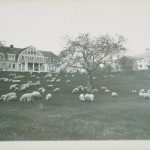 In January 1917, Germany resumed unrestricted submarine warfare, realizing it would mean American entry. The German Foreign Minister, in the Zimmermann Telegram, invited Mexico to join the war as Germany’s ally against the United States. In return, the Germans would finance Mexico’s war and help it recover the territories of Texas, New Mexico, and Arizona. The United Kingdom intercepted the message and presented it to the US embassy. From the embassy it was passed to President Wilson who released the Zimmermann note to the public, and Americans saw it as casus belli. Wilson called on antiwar elements to end all wars, by winning this one and eliminating militarism from the globe. He argued that the war was so important that the US had to have a 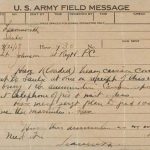 voice in the peace conference. After the sinking of seven US merchant ships by submarines and the publication of the Zimmermann telegram, Wilson called for war on Germany, which the US Congress declared on 6 April 1917. [https://en.wikipedia.org/wiki/World_War_I#Entry_of_the_United_States]

In commemoration of the centennial of the involvement of the United States in this historic and world changing event, Archives & Special Collections has installed five World War I themed exhibitions located in Homer Babbidge Library and the Thomas J. Dodd Research Center. Two of the exhibits highlight the research of UConn graduate students Allison Horrocks (History, Ph.D., 2016) and Mary Mahoney (History, Ph.D candidate). The exhibitions are scheduled to be open from 6 April – 15 May 2017.

Please join our guest curators for a gallery talk on Thursday 6 April 2017 from 11:30-12:30.  The talk will begin in Homer Babbidge Library in the West Alcove and then walk over to the Dodd Center.  Light refreshments will be served after the talk in the Dodd Center.

Exhibitions in this series include:

Posters of World War I from the collections of the Library of Congress illustrate the need for men, resources and financing necessary to support the efforts of the United States in its support of its allies. [Dodd Center, West Corridor]

The Land-grant College at War: A Centennial Retrospective traces the turn-of-the-century activities and role of Connecticut Agricultural College through its involvement in food production, research, military training, and the active participation of its staff and students. [Horrocks, Dodd Center Gallery]

From Library War Service to Science: Bibliotherapy in World War I outlines the implementation of a theory that books can heal. Put in practice in Connecticut during World War I, doctors and librarians joined together to apply reading as a form of therapy. [Mahoney, Homer Babbidge Library, West Alcove]

Dana T. Leavenworth – A Connecticut Soldier’s Experience from the Leavenworth Family Papers, the documents highlight the concerns of an officer serving in France as well as the activities and emotions of those serving on the home front.  [Dodd Center, Reading Room]

Commemorating the Centennial utilizes archival materials selected from the holdings of Archives & Special Collections.  The individual cases each represent a format or range of activity unified to illustrate the variety of perspectives, activities, emotions and consequences of the United States actively participating in the war effort. [Homer Babbidge Library, Gallery on the Plaza]