This post was written by Shaine Scarminach, a UConn History Ph.D candidate who is a student assistant in Archives & Special Collections. All photographs are from the University of Connecticut Photograph Collection.

Metanoia. A curious word with multiple meanings. Most trace its origins to the Greek, though its definition varies. Some have said it means repentance or reorientation. Others have argued it means to change your mind, or even further, to change your way of life. 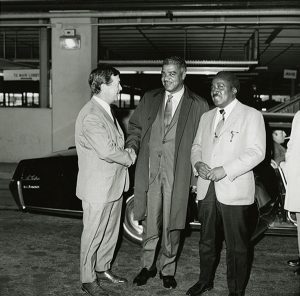 For the University of Connecticut, metanoia has been the name for a time of “meditation and reflection” on an important issue to the campus community and the wider world.

The idea (and word) originated with former UConn President Homer Babbidge in the fall of 1969, and the first Metanoia was held on May 6, 1970. It sought to increase “racial awareness, racial respect, and racial sensitivity” on campus.

Since that first occasion, University by-laws have included provisions for holding a Metanoia whenever necessary. Any group on campus has the right to petition for a Metanoia day, and once approved by the administration, an ad hoc committee of faculty and students is formed to plan the day’s activities. 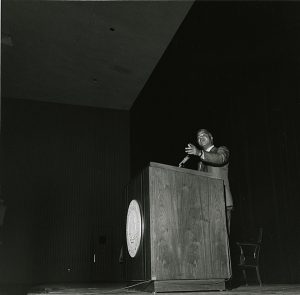 National Urban League President Whitney Young speaks at the first Metanoia in May 1970.

Metanoia events usually include speakers, panels, workshops, and other activities planned by the ad hoc committee with support from other campus groups. Classes have often been canceled in observance of the day’s activities, and some Metanoia have even stretched beyond a single day.

In keeping with its origins, issues of race have been a frequent subject of Metanoia days at UConn.

In 1979, a series of racist incidents against black students on campus, combined with a shocking incident in which a female graduate student was severely beaten while jogging 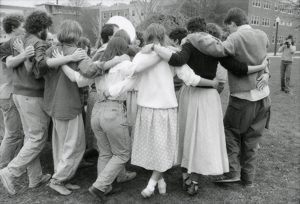 UConn students practice a whirling dance reminiscent of Sufi ceremonies at Metanoia in 1987.

on Separatist Road, spurred the University to hold a Metanoia day in early October.

Speaking on the occasion, former UConn President John A. DiBiaggio told a crowd of faculty and students that “each violent event ripples through the campus.” But feelings of anxiety and fear must be coupled with action. In the bitter days of the Reagan era, it seemed to DiBiaggio that “society at large may be moving to a posture of indifference to its members.”

Issues beyond campus have also prompted Metanoia days over the years. One in 1972 focused on the American war in Vietnam, while another in 1974 on constitutional crisis and the presidency reflected the Watergate scandal then-engulfing President Richard Nixon. 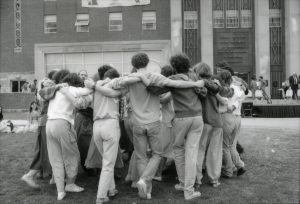 UConn students practice a whirling dance reminiscent of Sufi ceremonies at Metanoia in 1987.

Metanoia days have regularly featured notable guests. National Urban League President Whitney Young spoke at the first Metanoia in May 1970. Held amid tense discussions over a planned student strike against the Vietnam War, Young told students to fight for their beliefs but not to close the universities.

A Metanoia day on world peace held in April 1987 included a musical performance by folk singer Mary Travers along with speeches by Linus Pauling, the Nobel Prize-winning chemists and Barry Rosen, one of the 52 Americans held prisoner at the U.S. embassy in Tehran, Iran.

Students on a candlelight walk from the Student Union to Mirror Lake, which ended the 1987 Metanoia dedicated to world peace.

Perhaps more significant than the famous speakers have been the campus activities organized around Metanoia days. At the first Metanoia in 1970, groups of three—a black student, a white student, and a faculty member—visited each residence hall to hold frank and open discussions on issues of racism and education.

A Metanoia held in March 1975 focused on the world food crisis. For one of the day’s activities, around 2,000 students fasted to “sensitize” themselves to the deprivations of hunger. They also donated the money they would have normally spent in the dining halls to charities working to eliminate hunger around the world. 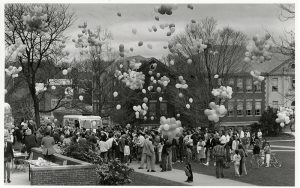 Students release balloons to celebrate the opening of Metanoia in April 1987. Linus Pauling, the Nobel Prize-wining chemist who spoke that day, is pictured at the bottom left.

Metanoia has sometimes come under criticism, most often because of its name. In a faculty survey before the first Metanoia in 1970, one respondent wondered if “metanoia” might be confused with “paranoia.” A 1979 committee report suggested keeping the event but changing the name. “Time spent explaining the term,” they wrote, “results in a tremendous loss of energy.”

Nevertheless, Metanoia lives on at the University of Connecticut. The tradition continues in 2017 under the banner “Together: Confronting Racism.” This year’s theme reflects the perennial problem of racism in American life. But it also signals the campus community’s continued desire to set aside time to confront that essential fact.

Reflecting on the idea of Metanoia, the late-Irving Cummings, a former Professor of English at UConn, perhaps put it best: “I find the term Metanoia both appropriate, humane, and risible—a disease, maybe? Metanoiacs of the world, unite!”