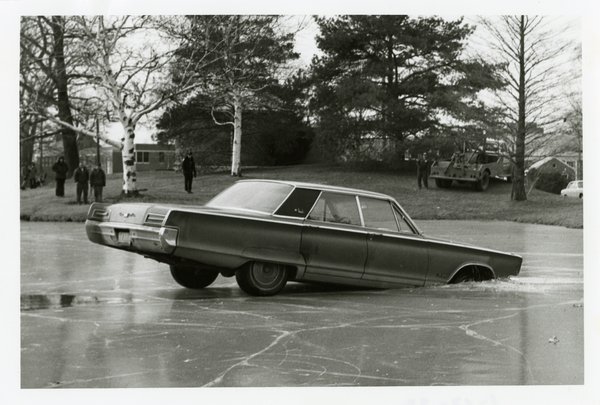 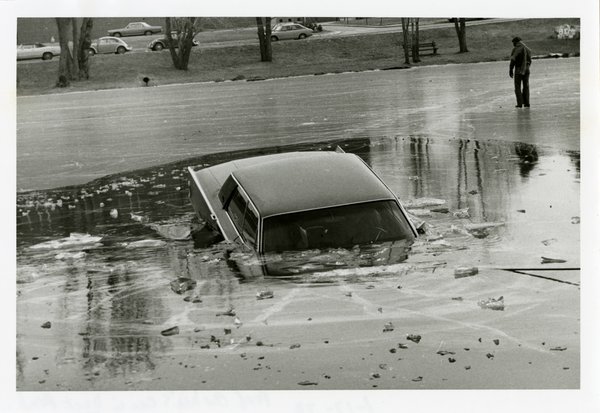 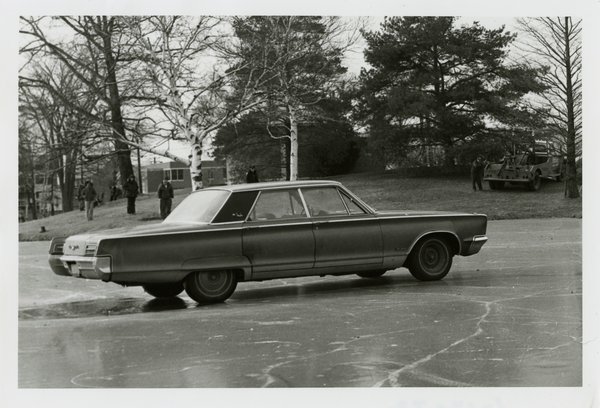 We recently came across a folder of photographs in the University Photograph Collection that we just had to bring to the attention of our blog viewers. Luckily the photographs were accompanied by a note written by Doug Cutchins, a UConn History graduate student who worked as a student assistant in the 1994-1995 school year at what was then the Archives Department of the UConn Library. Doug found the photographs in the Archives and interviewed the professor whose car is the subject of the photographs over 20 years earlier. With Doug’s permission we are using his writing (below) although we have made a few minor changes.

Here’s the story of the photographs:

On January 17, 1972, UConn Professor Bob Asher parked his car on the road above the Duck Pond, the body of water now better known as Swan Lake, as he did every morning. While he had remembered to set the parking brake he had neglected, he later assumed, to put the car into “Park.” The cold of the day froze and snapped the parking brake cable, and the wind blew the car down a hill, where it hit a rock or stump, swerved at a ninety degree angle, and skidded out onto the frozen pond.

Professor Asher received a call at his office from the University police, who told him his car was out on the ice. Rather incredulous, he waited until they came to his office to get the full story. The police walked into his office, and apparently glared at his print of Andy Warhol’s “Pigs” painting on the professor’s wall. Prof. Asher then decided to move the meeting out to the pond.

A tow truck was called, but refused to go out onto the ice. As everyone watched, the wind picked up again, blowing the car further out onto far thinner ice, which the car soon started to break through. Eventually, someone was able to get to the back bumper of the car with a cable, and it was pulled out of its partially-submerged state onto the hard ground.

The car was then towed to a local garage, where it was left out overnight. Unfortunately, since it had been under water, the engine block froze during the night, killing the car. The garage offered Prof. Asher $1100 for the car as scrap. Prof. Asher agreed immediately since he had bought the car used only a year earlier for $1000.