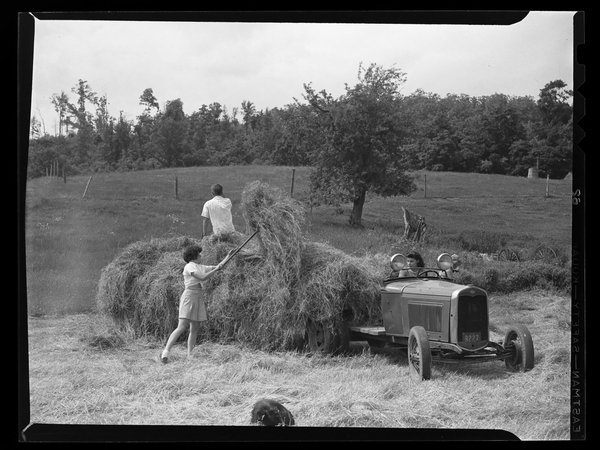 A recent trainee puts her new skills to work on a local farm. 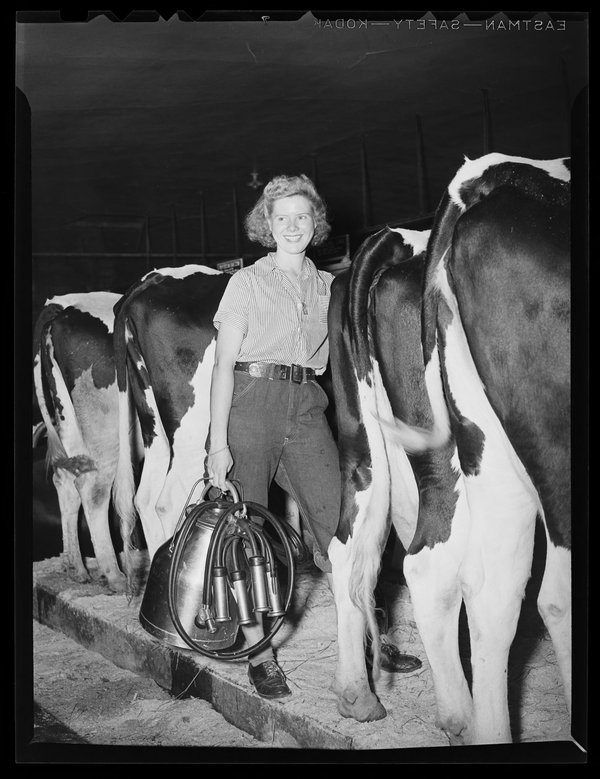 A trainee practices her milking technique. 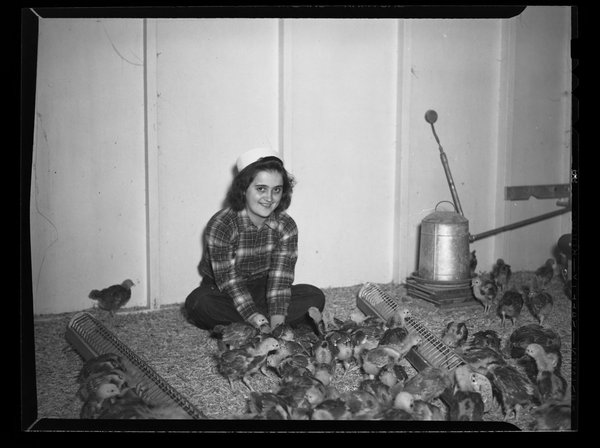 A trainee specializing in poultry. 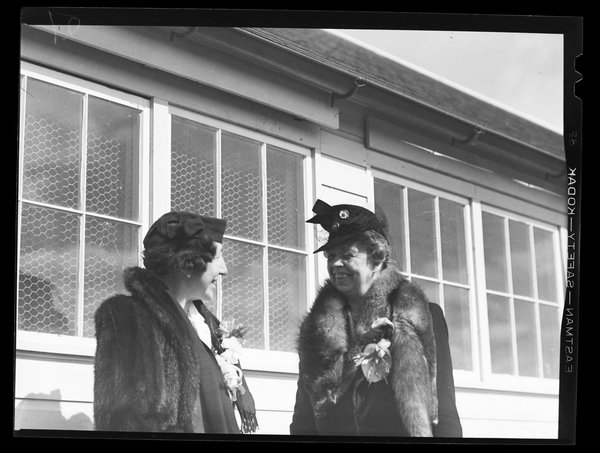 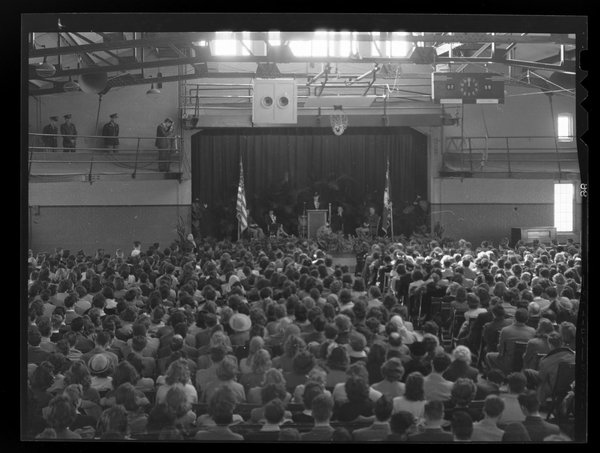 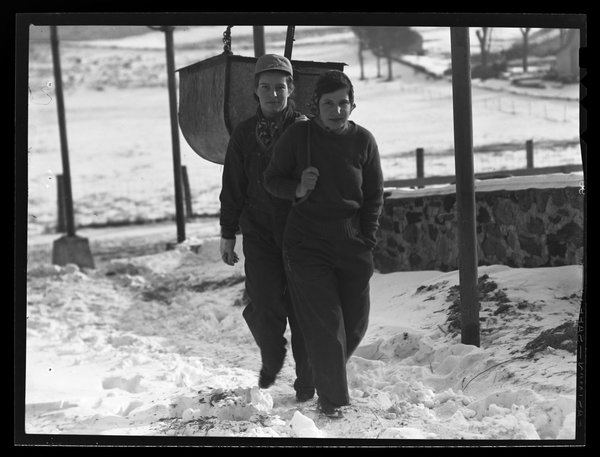 Recruits arrive for their training in the middle of winter 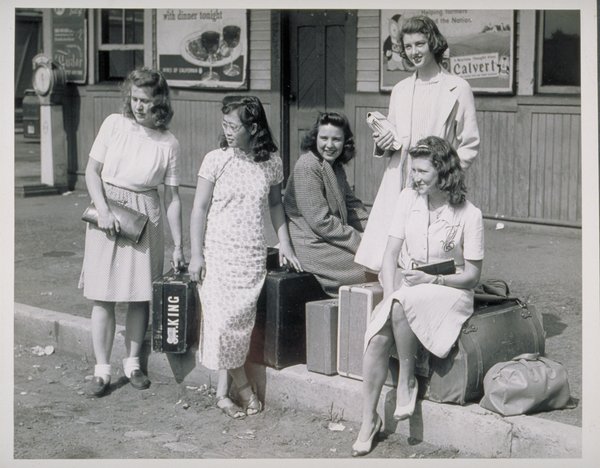 After finishing the two week course, recruits head to local farms to complete the program. Jane King and Cecily Baker second and third from the left. 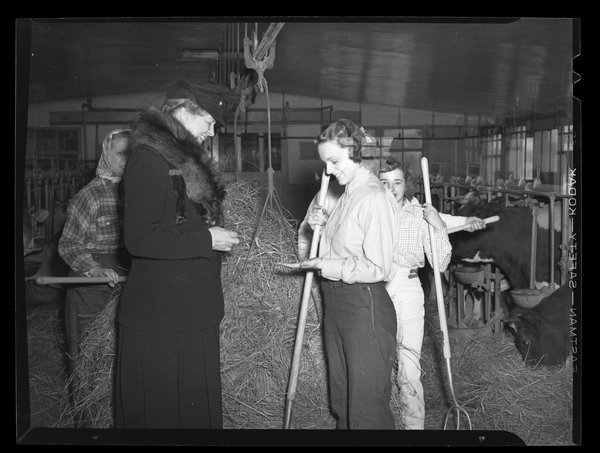 The Second World War upended domestic agriculture. Across the United States, farms faced an acute labor shortage as workers left the land for military service and industrial jobs in the defense industry. The federal government responded with a nationwide plan to put high school students, immigrants, and even convicts into agricultural service. Founded as an agricultural school in 1881, the University of Connecticut was primed to support the government’s efforts.

A notable example of UConn’s support for this plan came through the Connecticut Women’s Land Army (CWLA). The CWLA sought to train young women in agricultural work and place them on local farms in desperate need of labor. By serving in the land army, young women would receive training in modern agricultural practices and fulfill their patriotic duty by providing food for Americans at home and abroad.

The Connecticut program began in the summer of 1942 under the direction of Corinne R. Alsop. Alsop had served as a Republican in the Connecticut House of Representatives, and was a cousin and close confidant of First Lady Eleanor Roosevelt.

Alsop recruited thirteen women to take part in a two-week course taught by faculty from UConn’s Ratcliffe Hicks School of Agriculture. Training covered everything from cleaning barns and washing milk bottles to driving tractors and applying pesticides. With their training complete, seven of the women were then placed on local farms.

The initial program was deemed a success, though some revisions were in order. Judith Churchill, one of the trainees, wrote to Alsop after working on a farm in Litchfield County. Churchill described the job as “most interesting and successful.” But she felt the program would benefit from more specialized training. Alsop and the head of the program at UConn, Wilfred B. Young, agreed and changes were made as the program entered its second year. 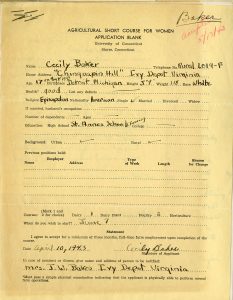 The new program, which began in February 1943, reflected a more ambitious vision. The course would still last two weeks, but trainees would specialize in either poultry or dairy work. Also, the course would no longer be a one-time affair. Alsop and Young aimed to have about twenty students trained and placed on farms every two weeks. The expanded program was made possible with increased support from the Farm Security Administration (FSA) and other federal agencies.

In the revamped program, all costs would be paid by the FSA as long as the trainees agreed to serve on a local farm for at least three months. This new offer succeeded in attracting a range of applicants. Women of all ages and occupations, and living as far away as Virginia and Missouri, wrote to Alsop and Young for more information about the program.

Even with the diversity of applicants, most trainees were young white women in their late teens and early twenties. The majority came from within Connecticut and almost all admitted to having little to no experience with farm work.

The rare exception was a Chinese exchange student named King Sze Tsung, who was in the country learning to teach braille to blind children. Sze Tsung, or Jane as she was known, even received coverage in the local newspaper.

When the first group of trainees arrived on the Storrs campus in February, they faced the daunting prospect of beginning their training in the middle of winter. But the school newspaper, the Connecticut Campus, reported that “despite the biting winds, freezing temperatures, and the snow covered ground,” the women were “cheerful, eager and full of spirit.” 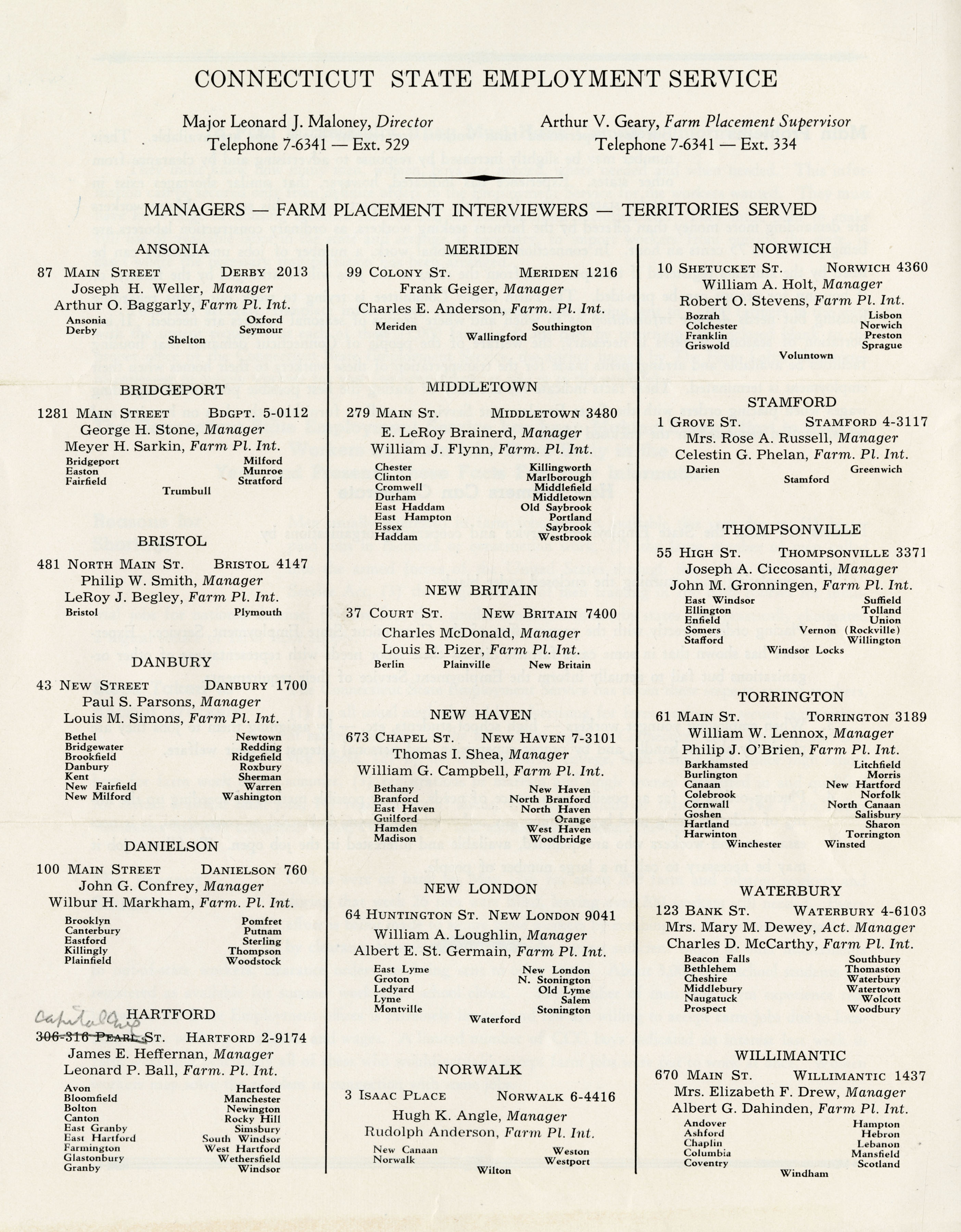 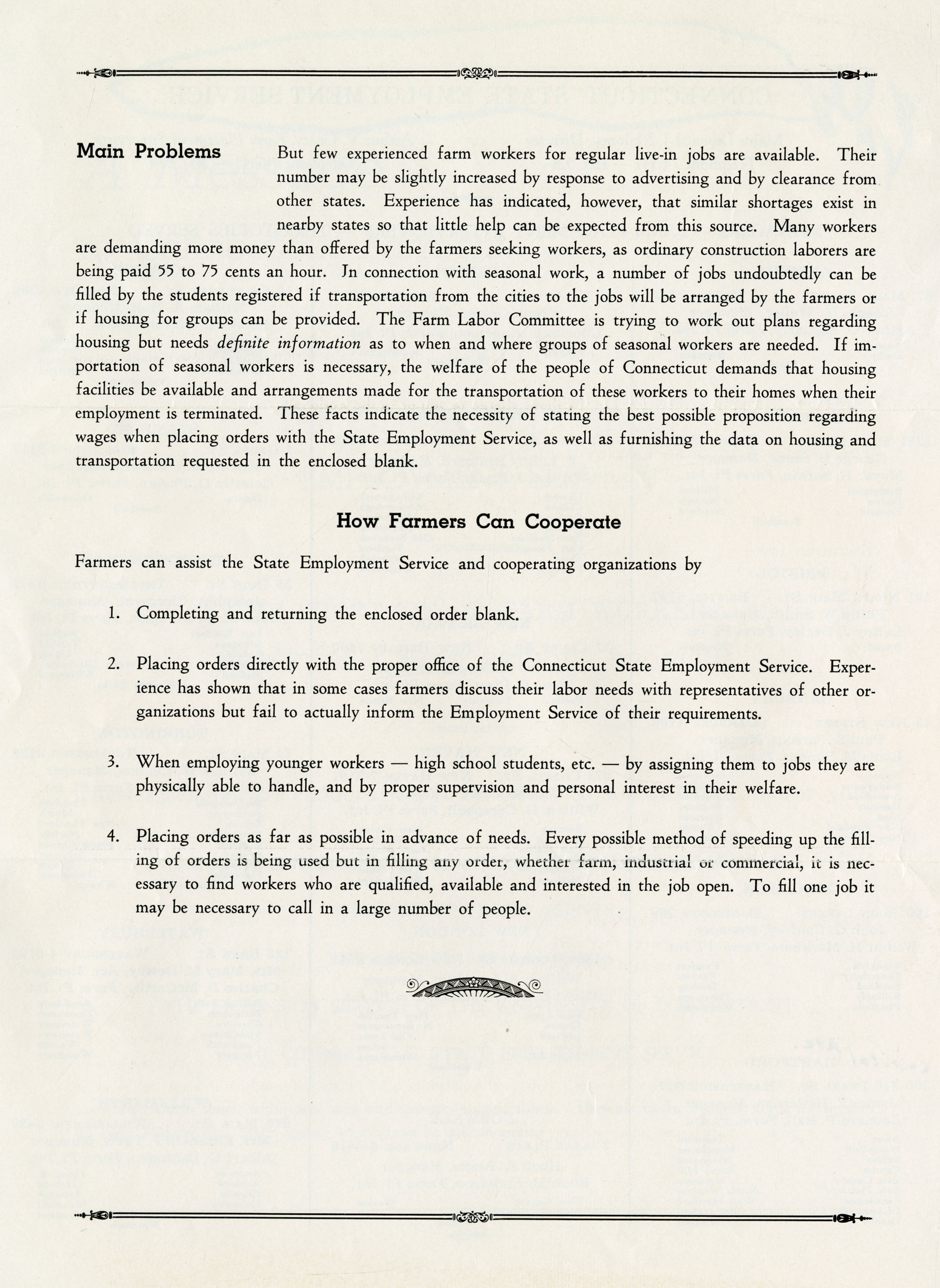 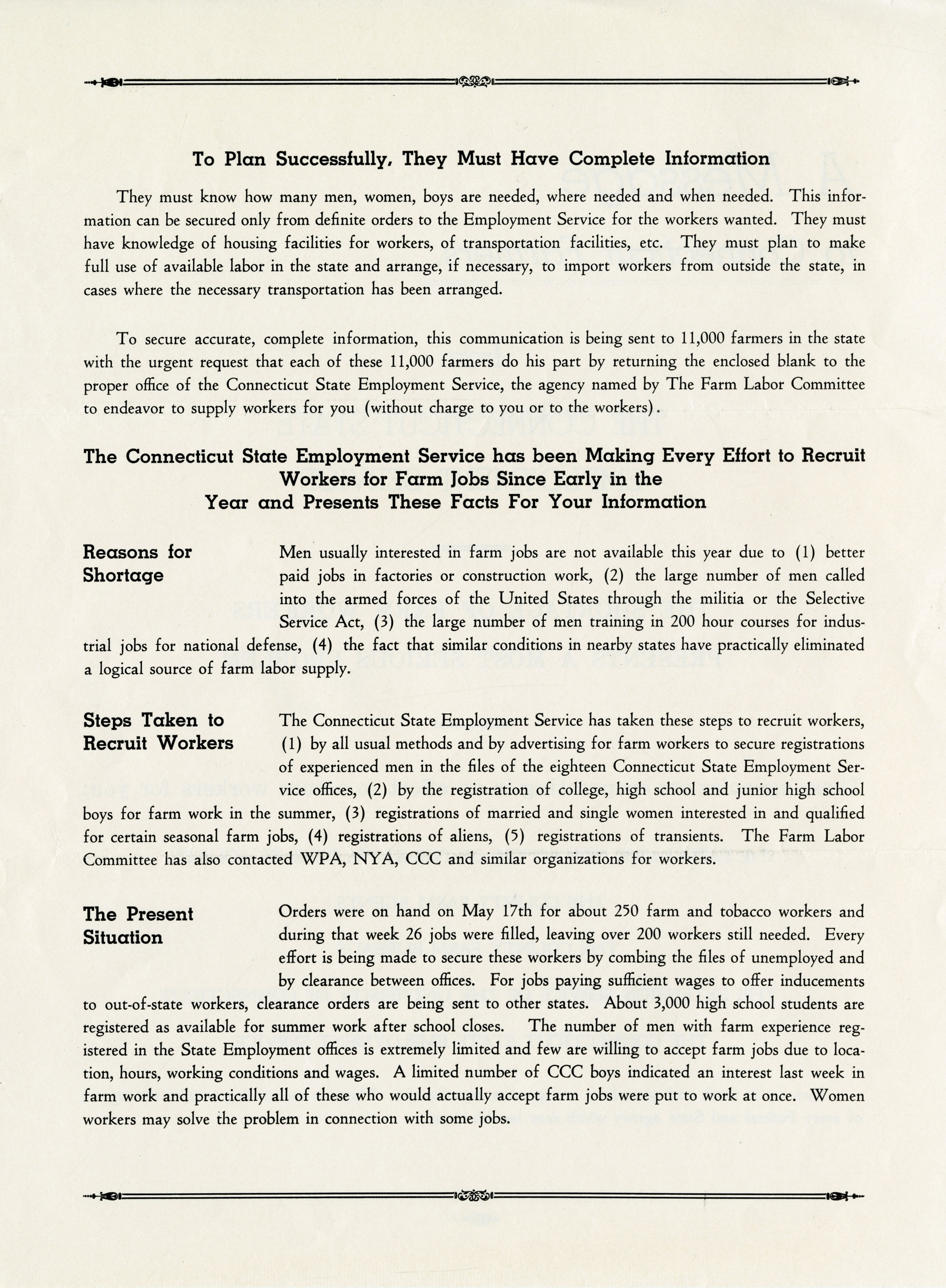 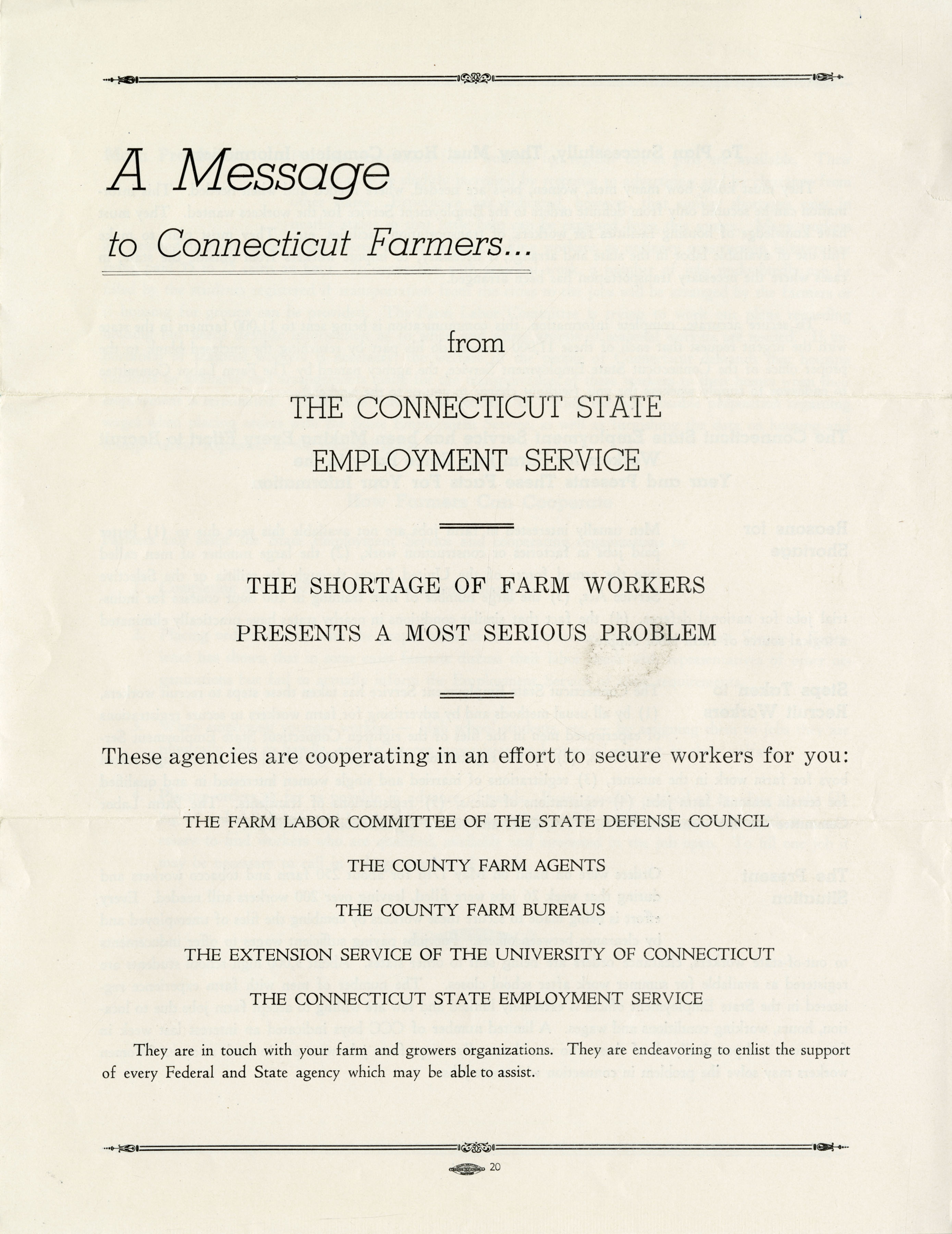 The trainee’s day began around 5:30am. The women milked cows, fed chickens, cleaned utensils, and tried their hand at other farm tasks. Along the way they received instruction on more challenging jobs like cooling and bottling milk or grading eggs. The day ended around twelve hours later with dinner and socializing in campus facilities.

Despite the positive response from trainees, high hopes for the program were soon dashed. In particular, attendance fell well short of the initial goal. Meanwhile, the state’s labor shortage continued to hinder agricultural production. But the program received a publicity boost in March 1943 when Eleanor Roosevelt paid a surprise visit to the Storrs campus.

Accompanied by CWLA director Alsop, Roosevelt spent her time at UConn visiting with President Albert N. Jorgensen, delivering a lecture on the importance of youth involvement during the war, and taking a tour of the poultry houses, dairy barns, and dormitories used to train and house the CWLA members.

After finishing the two-week course, CWLA trainees were placed on farms around Connecticut. The women were guaranteed room and board and a salary that ranged from $45.00 to $75.00 a month.

Once on the farm, the women found themselves faced with a wide range of tasks.  They might take on work for which they had been trained or be pressed into jobs that fell well outside their instruction. For example, one trainee recounted her dismay at having to face off with a troublesome tractor engine.

In job surveys sent to Wilfred Young, farmers praised the instruction offered by UConn and commended the work done by their new employees. Some even planned to rely on CWLA labor in the future.

CWLA recruits also spoke well of the program. Marie Sullivan, a trainee who worked on a farm in Middletown, reported that she “enjoyed the work immensely.” Another named Polly Brooke said she “liked every minute of the work and would do it again.”

For some though, the adjustment to farm life was not always easy. Recruits often complained about poor housing, a lack of proper training, and the dearth of social life on the farm. Farmers too grumbled about the women’s lack of skill, charged them with laziness, and pressed Young to instruct future recruits on how to better integrate into farm life. 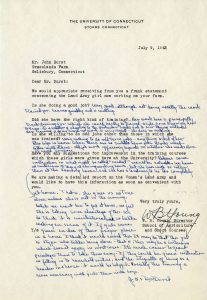 One farmer, for instance, lamented that his trainee never left him and his wife alone. “While we want her to feel at home,” he wrote, “we feel she is taking some advantage of this.”

By the end of 1943, several waves of recruits had passed through the program and been put to work on Connecticut farms. In the end, though, both Alsop and Young offered a gloomy assessment of the program.

Young wrote that despite large numbers of applicants, many women failed to show up for one reason or another. In an interview with the Connecticut Campus, he noted a number of challenges to recruitment. The CWLA had a small publicity budget, hours and wages for factory work were better than in agriculture, and, Young feared, many interested women may have been scared off by the thought of hard labor on the farm.

Alsop echoed Young’s view, though she added that prejudice toward hiring women for farm work also impeded the program. But she argued that the CWLA should not be judged by the number of placements.

In her estimation, the Connecticut Women’s Land Army had come a long way. “There is still more pioneering to be done,” she wrote, “but the first roads are cleared.” The program continued to run for the remainder of the war, though it never proved as successful as some had hoped.