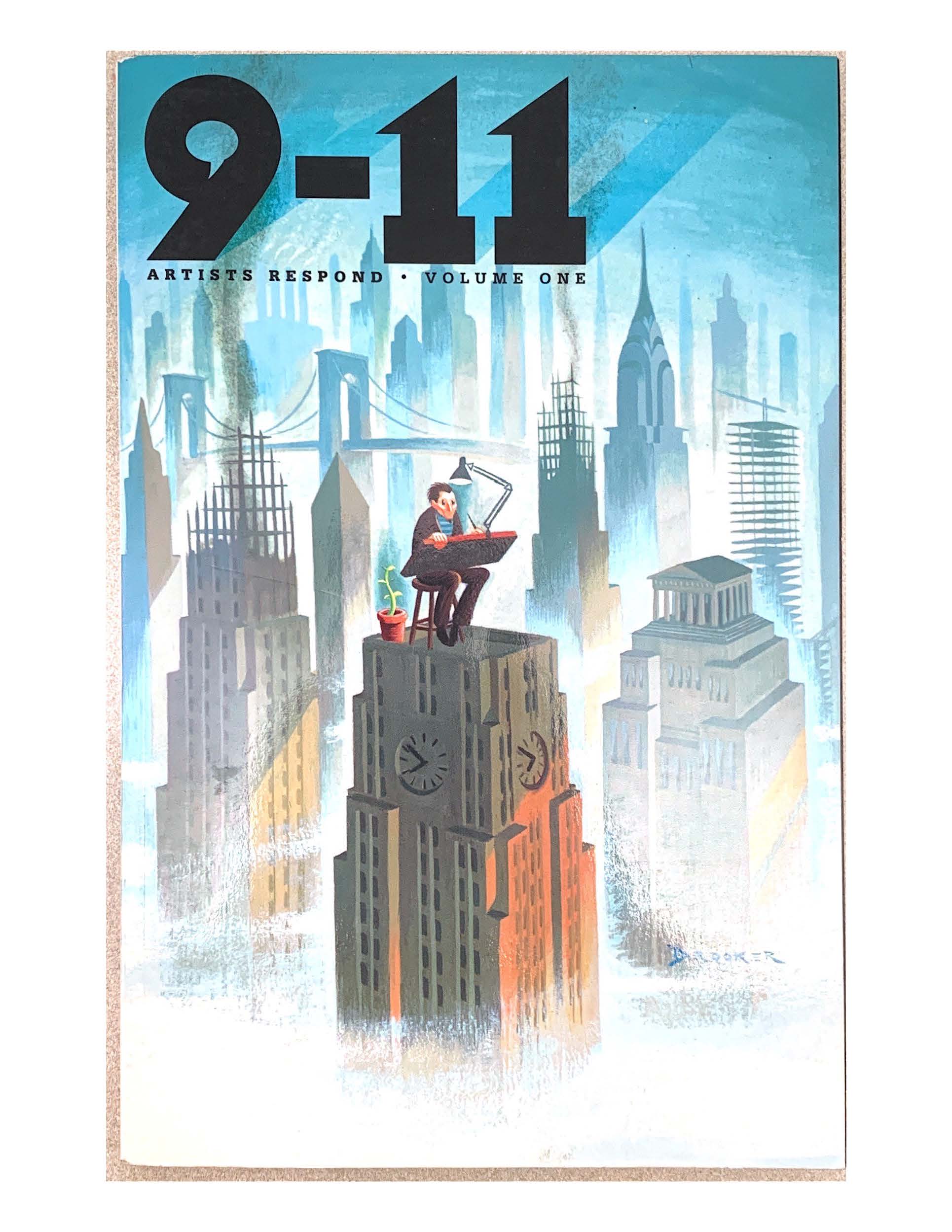 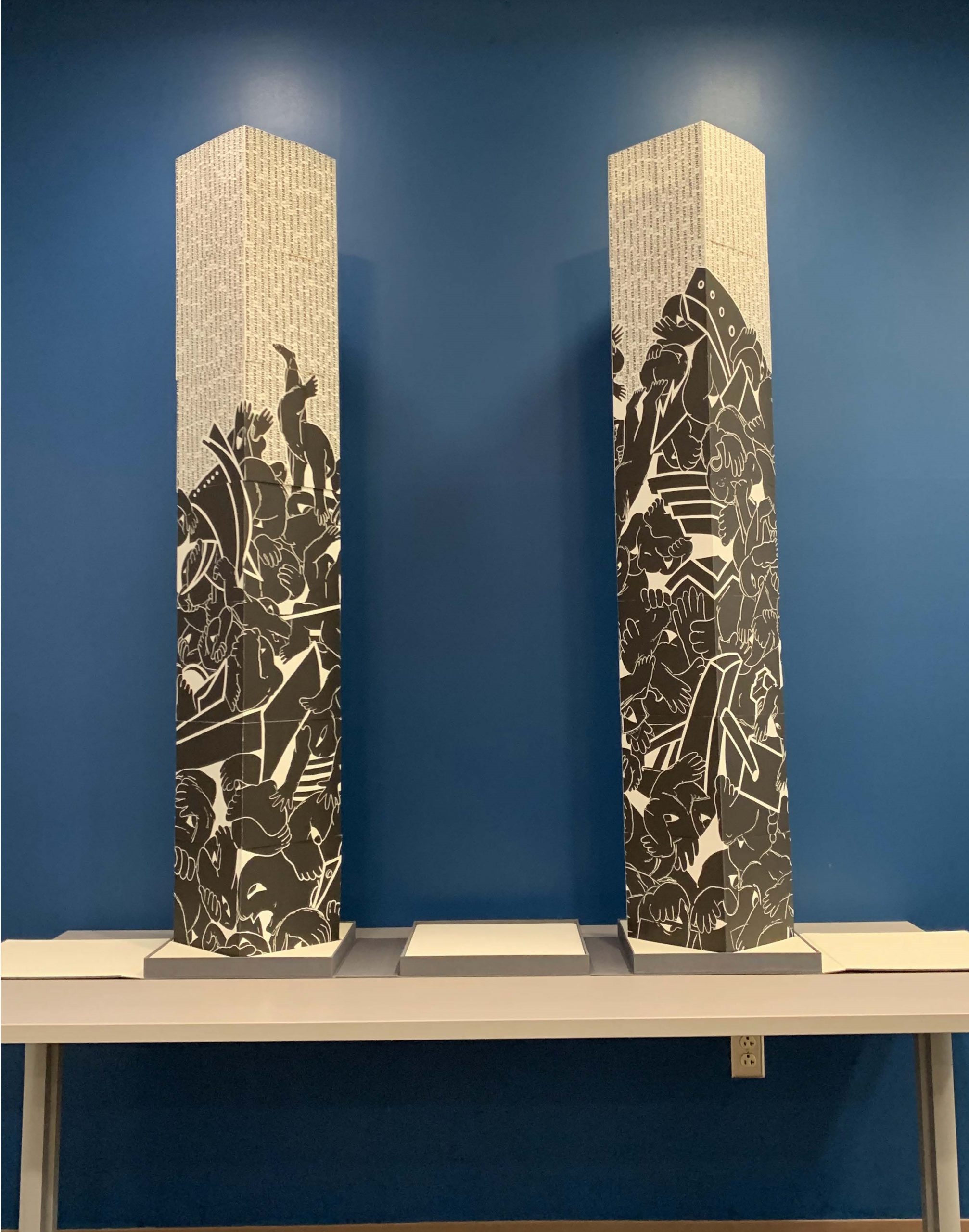 Werner Pfeiffer’s “Out of the Sky,” published in 2006, fully constructed and viewed from the front. 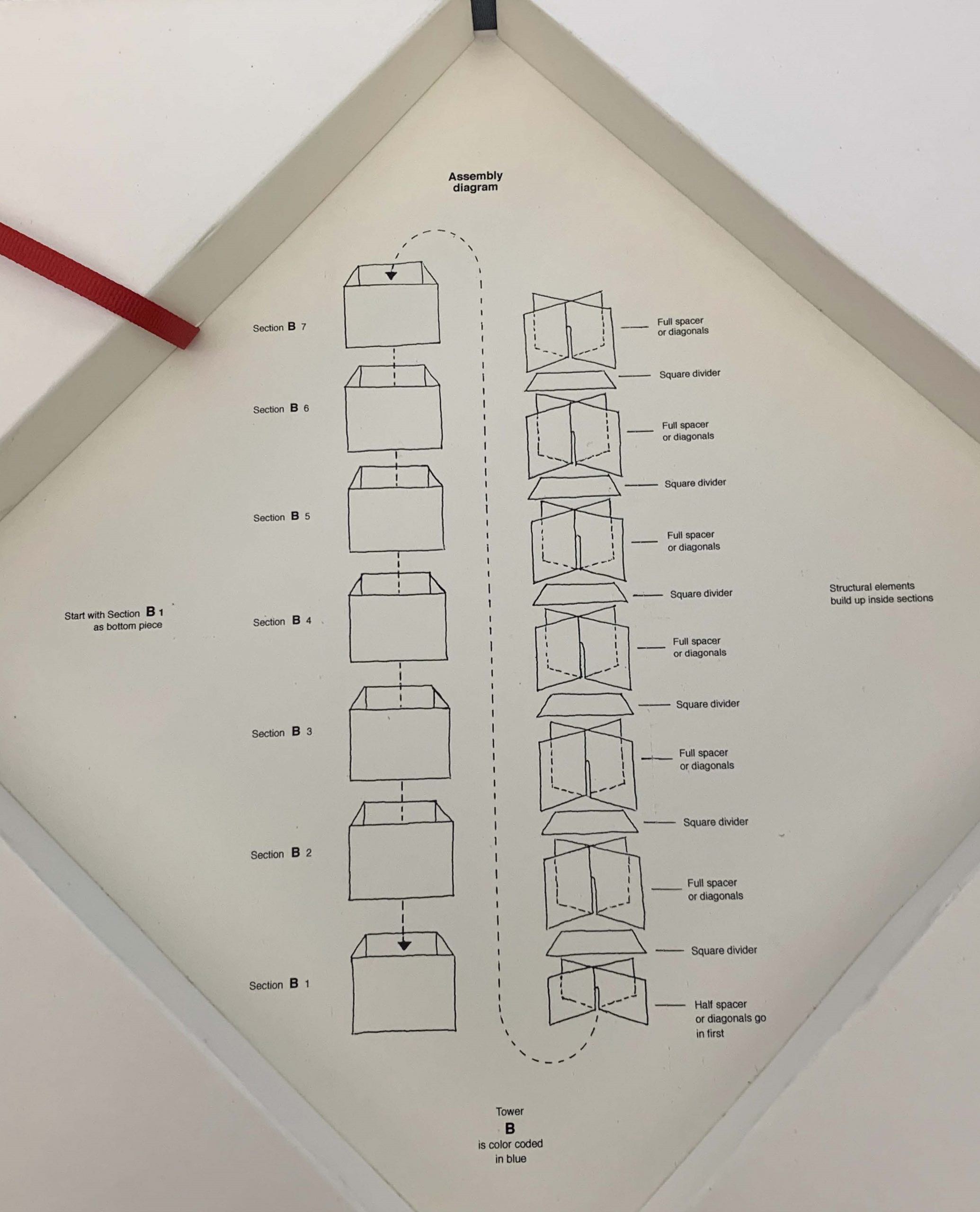 Instructions on how to put the pieces of one of the two towers of Werner Pfeiffer’s 2006 “Out of the Sky” art book together. 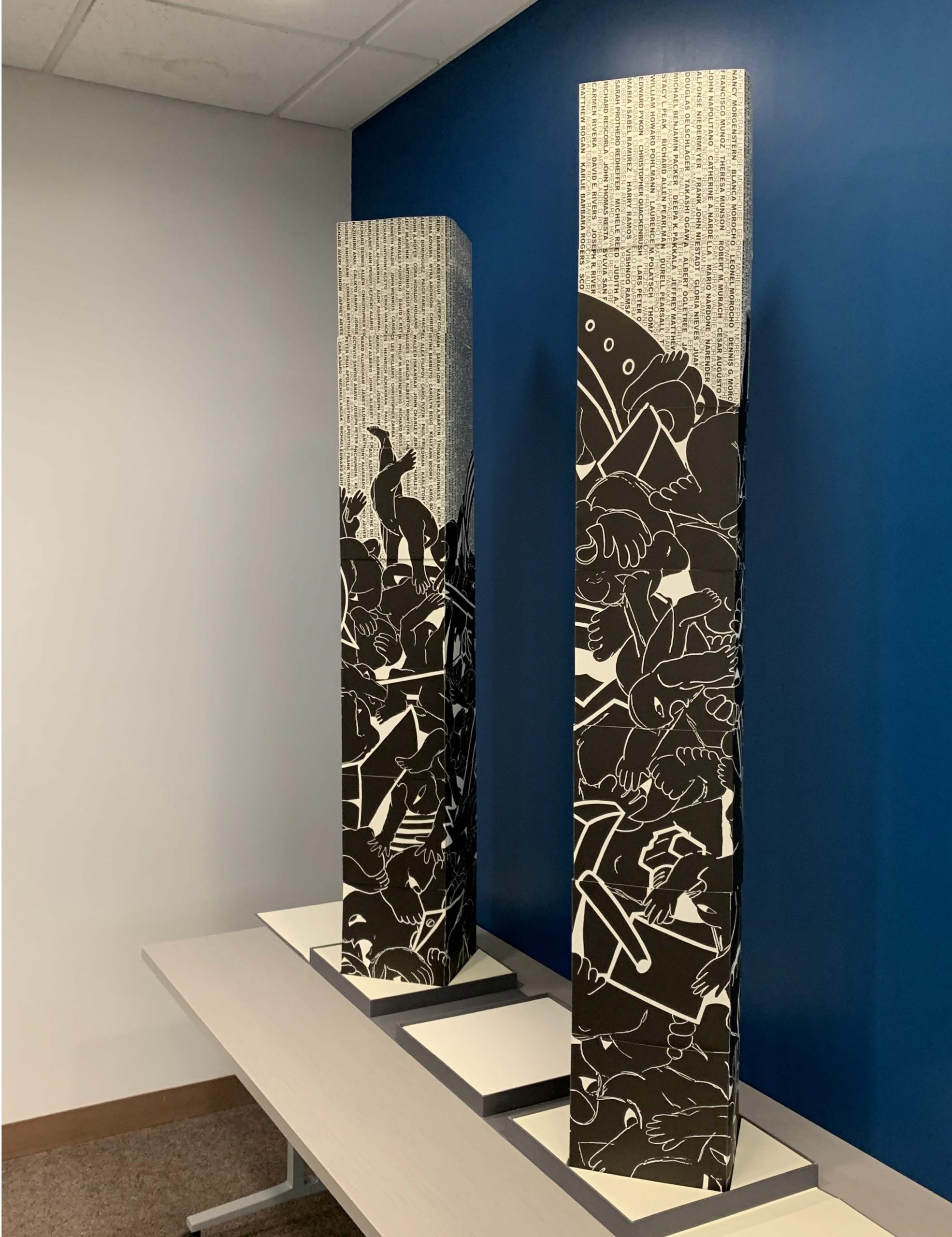 Werner Pfeiffer’s “Out of the Sky,” published in 2006, fully constructed and viewed from the side. 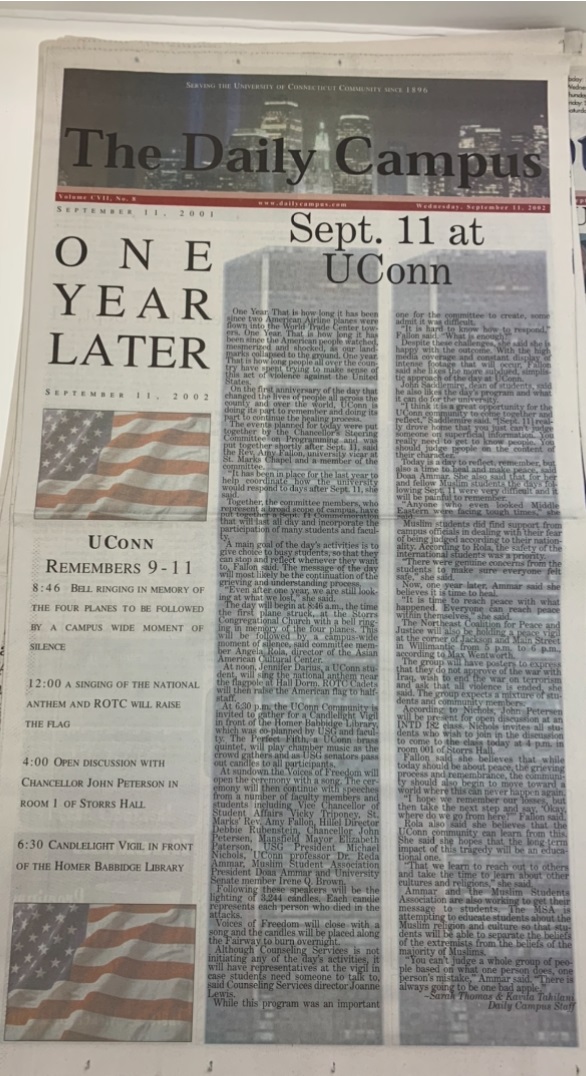 Front page of The Daily Campus on September 11, 2002, remembering the tragedy one year later. 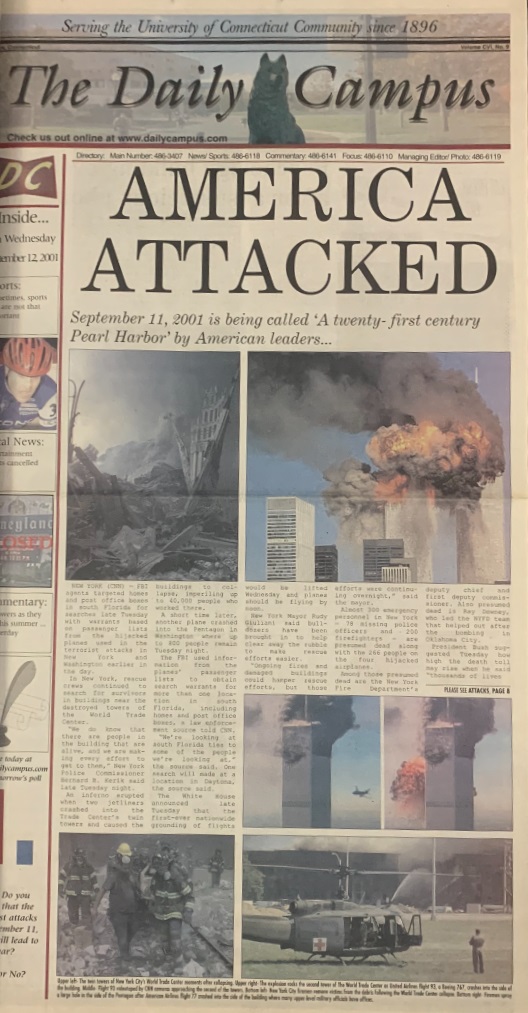 Front page of The Daily Campus on September 12, 2001, featuring a CNN article reporting on the events of the day before. 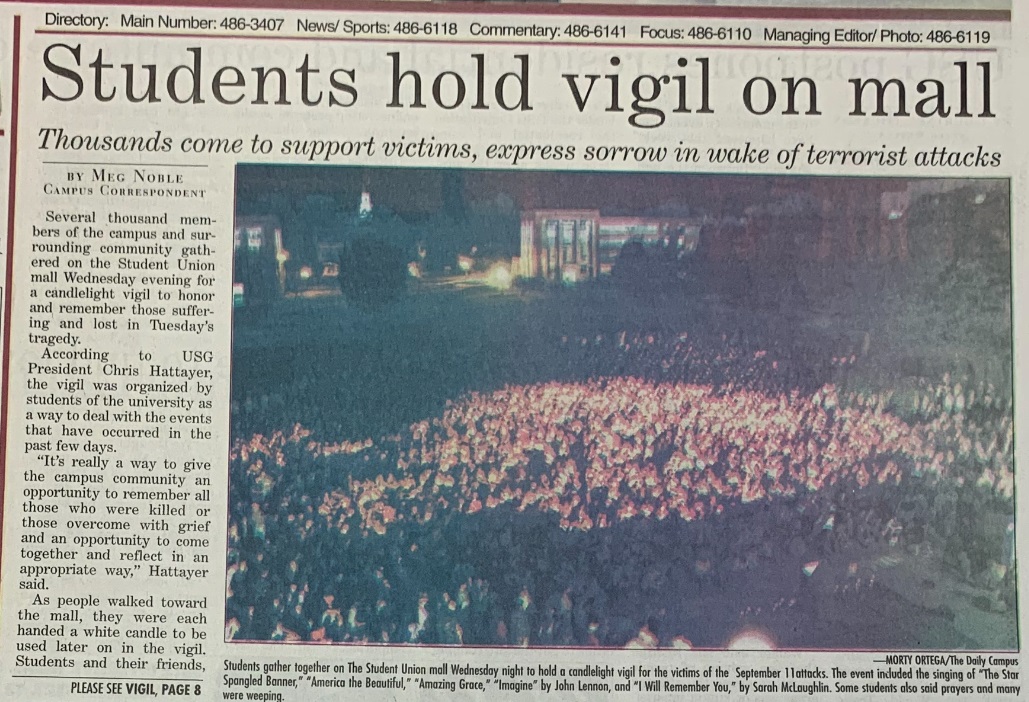 The front page story of the September 13, 2001 issue of The Daily Campus, describing a vigil attended by hundreds of UConn students held on the night of September 12

A poll in the September 13, 2001 edition of the The Daily Campus, asking students whether or not they thought the events of September 11 would lead to war.

Front cover of “Some of these Daze” by Mimi Gross and Charles Bernstein, published in 2005 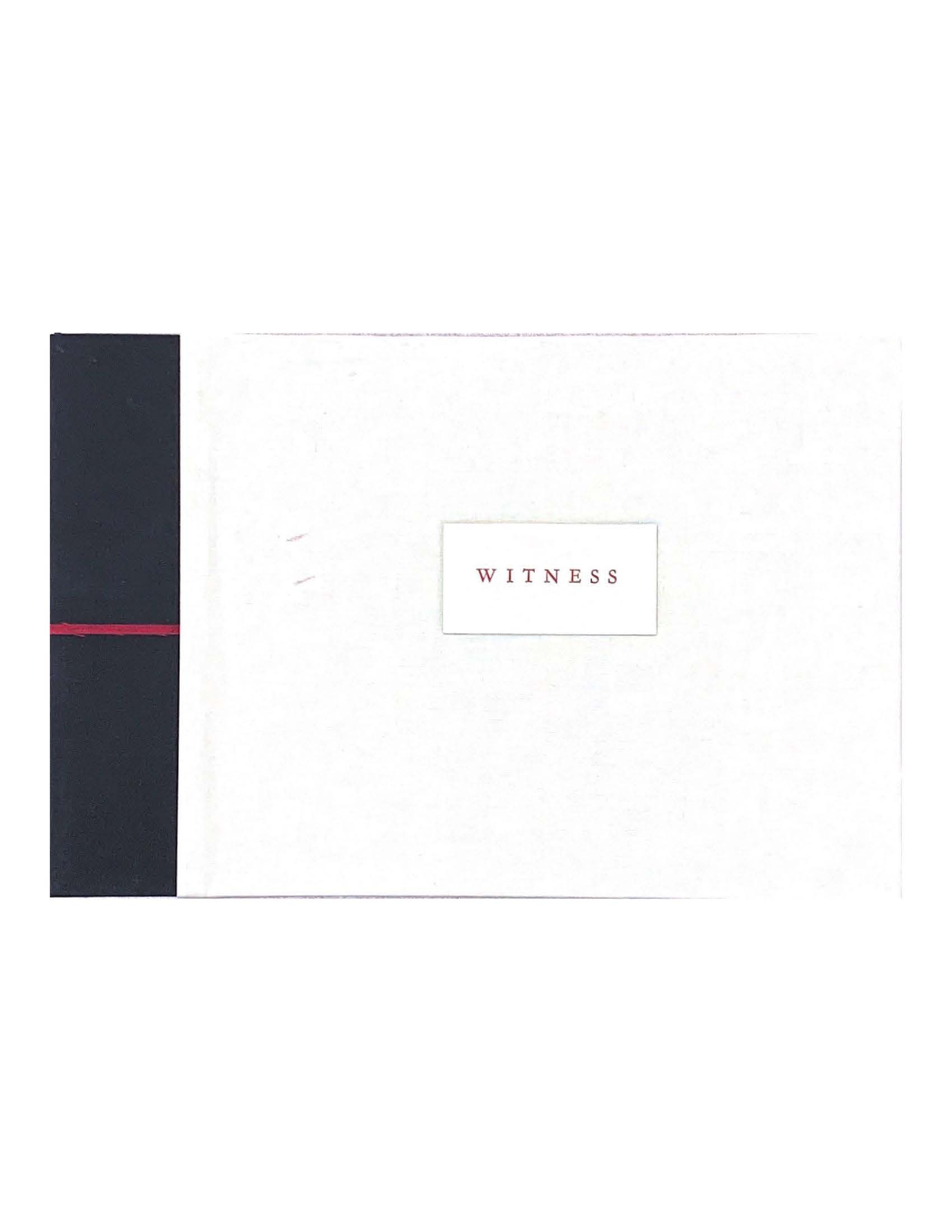 .Front cover of “Witness” by Kathleen Fraser and Nancy Tokar Miller, published in 2007

On the morning of September 11, 2001, four planes were hijacked in airspace over the eastern United States by terrorists affiliated with al-Qaeda. Two of the planes were deliberately crashed into each of the twin tower buildings of the World Trade Center in New York City; one plane crashed into the Pentagon in Washington, D.C.; and the fourth plane crashed into a field in Shanksville, Pennsylvania.

These attacks stunned the United States and the world far beyond our borders; the effects were immediate and visceral. The aftermath had a long-lasting impact on many facets of society, including politics, commerce and culture.

News of the attacks greatly impacted life at the University of Connecticut. The following day a vigil was held on the Student Union Mall that brought over a thousand members of the Storrs community together in solidarity. The student newspaper, The Daily Campus, filled the paper with content related to the tragedy for most of the rest of the month.

For those conducting research projects about the 9/11 terrorist attacks, Archives & Special Collections holds resources related to the tragedy available in many different mediums and from a myriad of perspectives. From congressional records to art books to newspaper clippings, the types of media created around the tragedy vary greatly. Among some of our archives’ relevant items are:

Christopher Shays Papers. Christopher Shays served in the U.S. House of Representatives from 1987 to 2009 as a Republican from Connecticut’s 4th District. At the time of the September 11th attacks, Shays was on the House National Security Subcommittee, and was later a part of the 9/11 Commission. His papers include many documents related to 9/11 and the country’s response, including the recommendations of the Commission, lists of victims, findings on health effects, minutes from hearings and more. For more information on how to navigate this collection, a finding aid can be found online here: https://archivessearch.lib.uconn.edu/repositories/2/resources/214

Robert R. Simmons Papers. Robert Simmons was in his first year in the U.S. House of Representatives when the 9/11 attacks occurred. He represented Connecticut’s 2nd District from 2001 to 2007 as a member of the Republican Party. Portions of this collection relating to 9/11 include files marked as such, as well as Simmons’ files related to the “Global War on Terrorism,” which date from September 2001 to June 2004.  For more information on how to navigate this collection, a finding aid can be found online here: https://archivessearch.lib.uconn.edu/repositories/2/resources/658

Werner Pfeiffer, “Out of the Sky: Remembering 911.” This 2006 art book by Werner Pfeiffer was published around the five-year anniversary of the September 11th attacks. It consists of a list of the victims, a small booklet written by Pfeiffer, and two constructable towers. The towers are each made of seven segments that are supported by blank inside cardboard sheets, and each stand about five feet tall. On the outside of the towers, Pfeiffer incorporated names of victims into his artwork. This work can be found in the archives’ stacks at location: D1996

Sidney Jacobson and Ernie Colón, “The 9/11 Report: A Graphic Adaptation.” Published in 2006, this book puts the findings of the 9/11 Commission into the format of a graphic novel. Jacobson, former managing editor and editor-in-chief of Harvey Comics, served as the writer, while Colón, who had worked for Harvey as well as DC Comics and others, served as the illustrator. The two collaborated once more for a sequel in 2008, titled “After 9/11: America’s War on Terror,” but that book is not available in the archives. This work can be found in the archives’ stacks at location: CLC C4476

Mimi Gross and Charles Bernstein, “Some of These Daze.” This spiral-bound art book was published in 2005 and is a collaboration between illustrator Mimi Gross and writer Charles Bernstein. Gross was near the World Trade Center on September 11, 2001, and began making sketches of what she saw while she was there. This book exhibits those sketches while coupling them with what Bernstein wrote, also from Manhattan at the time of the attacks, but slightly more removed in the Upper West Side. This work can be found in the archives’ stacks at location: D1882

Dark Horse Comics, “9-11: Artists Respond, Volume I.” This book was published in 2002, and features the artwork and writings of many artists, all related to the attacks. This was the first volume of a two-part effort, with all the proceeds going to organizations aiding the families of victims of the tragedy. Unfortunately, the archives does not have a copy of Volume II, but Volume I can be found in the archives’ stacks at location: C10332

The Daily Campus. This collection is made up of issues of UConn’s student newspaper, dating from 1896 to present day. As The Daily Campus has been printed daily since 1952, this includes coverage of the events of September 11, 2001, and the subsequent aftermath. Throughout that month, many articles, images and other forms of media related to 9/11 were featured in the paper. In addition to coverage from directly after, the paper has printed more content surrounding significant anniversaries.