This guest blog post is written by Aidan Brueckner, a graduating honors student majoring in Digital Media and Design, and minoring in Human Rights which he completed an internship for at the Archives & Special Collections in the Spring Semester of 2021. Aidan’s descriptive work can be found in the Alternative Press Collection online.

It is no secret that youth activism is on the rise. Across the world, demonstrations
occur for myriad reasons related to racial justice, climate change, drug control, and
countless more key issues. Not only are these matters far-reaching across all aspects of
society, touching on numerous disparate sectors, but the apparent frequency of social
justice events is increasing quickly as well. The push for recognition and change from a
world that has proven unforgiving and unfair is picking up steam. Naturally, college-age
students tend to be a large portion of the ones driving these agendas, as the nature of
college itself encourages collaboration and a drive to excel, as well as an increased
emphasis on critical thinking. Most importantly, however, college allows students to
collect as a group of like-minded individuals, and presents them with an opportunity to
make their voices heard. UConn is no exception, having had a well-documented history
of activism on campus from its inception. Much of this activism is contained within the
Archives, and this semester I had an opportunity to explore and evaluate some of it.

END_OF_DOCUMENT_TOKEN_TO_BE_REPLACED

It has been a while since my introductory blog post, and much has happened between then and now! I have examined and rearranged two series of the Morrison Papers (about seven boxes of material) and prepped them for digitization, and also prepared new finding aids for each. 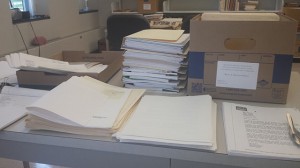 Series VII deals with Morrison’s time on the U.S. Commission on Immigration Reform (1993-1997). It is a small collection—only two boxes—but had an interesting mix of correspondence, press clippings, and copies of government documents to look through, and was a good way to ease into my new job at the archives. 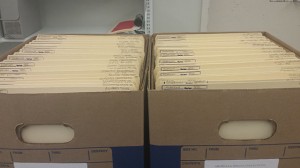 Series VIII was far more complex. It deals exclusively with Morrison’s involvement in Irish affairs. Among the five subseries I established in the new finding aid, researchers will now have access to information about topics such as Morrison’s leadership of Americans for a New Irish Agenda (ANIA) and Irish Americans for Clinton-Gore, his work on Irish immigration, and his role in urging President Clinton to take a more active role in the peace process in Northern Ireland.

It’s clear from looking through these papers that Bruce Morrison was a man incredibly committed to his work. His involvement in the Irish peace process, for example, seems manageable until you realize that while he was leading fact-finding missions to Northern Ireland and petitioning the White House for a new Irish agenda, he was also serving on the Commission on Immigration Reform (1993-1997), practicing as an immigration lawyer in New Haven, and chairing the Federal Housing Finance Board (1995-2000). He also had a wife and young son (born 1992) at home.

It’s also clear that Ireland played a huge role in much of his career. In the 1990s, he became a veritable superstar amongst the Irish-American population, due in large part to his authorship of the Immigration Act of 1990. A provision of that bill, known as the “Morrison program”, allotted more than 16,000 visas to immigrants from Ireland and Northern Ireland attempting to enter the United States. For much of the early 1990s, Morrison was a guest of honor at countless social functions at Irish clubs and institutions, and was even named one of Irish America magazine’s Top 100 Irish-Americans. 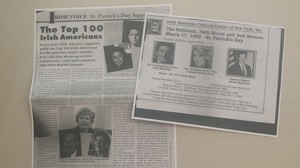 Here’s what really surprised me, however; Morrison’s upbringing and personal life don’t at all reflect his high standing in the Irish-American community, or the deep interest in all things Ireland that came to define his political career. Adopted as a baby, his Irish roots consist of a biological father who was, in Morrison’s words, “somewhat Irish.” He was raised Lutheran, not Catholic. One reporter offered the following description in a March 1997 article for the Hartford Courant:

No Irish flag waves from his porch on St. Patrick’s Day. He isn’t much of a storyteller, doesn’t quote from W. B. Yeats, and doesn’t sing Irish songs, or even profess to know any of the words. In his home, the paintings and sculptures reveal a preference for primitive art from Africa and South America. Only some expensive Irish crystal ware — gifts and awards from groups in both Ireland and America — offer any clues that Morrison has an Irish connection.

It was clear from my examination of these collections that Morrison was never destined, by virtue of his childhood experiences or family background, for the career he ended up having. So I had to ask; why Ireland? The simple answer is that as a young Congressman, spurred on by reports of human rights abuses in Northern Ireland, he was persuaded to leave the Friends of Ireland, which consisted of politicians who rarely criticized the British and limited their activities to what Morrison called “St. Patrick’s Day blather,” and join instead the Ad Hoc Committee for Irish Affairs, a more “radical” element of Congress which took a deep interest in the Ireland issue.

Even once on the committee, however, his involvement in Ireland was characterized by a certain sense of emotional detachment. In the March 1997 article, Morrison pointed to a “radicalizing experience” in 1987 that began to reverse that trend. While on a fact-finding mission to Northern Ireland, Morrison’s car was stopped by a Royal Ulster Constabulary (RUC, a British-backed police force) armored vehicle:

A dozen officers surrounded the car. When he was asked for papers, Morrison handed over his passport, stamped with “Member of Congress.” The policeman refused to return it, and a shouting match ensued, with congressman and officer pulling on the passport. Other officers rifled through the trunk.

Infuriated but ever the lawyer, Morrison pulled out a notepad and began to write down police badge numbers. An RUC officer grabbed the pad. It was a crime, he said, to collect information about security forces. They were released 30 minutes later.

All that would follow—the peace process, the Morrison visas, and the outpouring of support from the Irish community—would now be more than just a political agenda for Morrison. The man himself perhaps said it best:

“Here I had this fortuitous coming together of opportunities that had made me a hero in Irish America and in Ireland . . . and it was like, ‘That’s great, I can just bask in the glory of it all and get upgraded on Aer Lingus [Ireland’s national airline], but I’m an activist. That’s who I am. How do I take this and make something different in the world?’”

Put simply, his dedication to all things Irish came not from his ethnic heritage, but from a life lived as an activist. While attending the University of Illinois, he formed an advocacy group for graduate students, and after his graduation from Yale Law School he practiced at a firm which specialized in “poverty law”, helping those without the means to help themselves. Bruce Morrison went where he was needed, and in the early 1990s, that place just happened to be Ireland, and he just happened to have an Irish background.

Questions of motive aside, one thing is certain: Bruce Morrison has become a cult figure in the Irish-American community, and the prestige he earned from his work in 1990s isn’t likely to fade anytime soon.