Many of our researchers have successfully accessed the online New Haven Railroad Valuation Maps, from the UConn Libraries’ Digital Mosaic site at http:/images.lib.uconn.edu/.  Although we have heard from many how useful it is to have the maps accessible to off-site researchers, we’ve also heard that the vagaries of ContentDM, the database system where the maps sit, don’t help them follow the railroad line from point to point.  The maps, which are each one mile footprints of the railroad tracks as they follow the complicated New Haven Railroad system as it was in 1915, have always been rather isolated from, and unlinked to, each other.

Happily, that glitch is now overcome, thanks to the the magnificent efforts of the Map and Geographic Information Center, better known as MAGIC, an important special library within the UConn Libraries system.  MAGIC, headed by Geographic Information Systems Librarian Michael Howser, has created a map index that now allows researchers to follow the railroad lines on a map and click at any point to bring up the 1915 valuation map.

You will find the index at http://magic.lib.uconn.edu/mash_up/nynhhrr_index.html

Isn’t this great?! One could even say that this is truly, well, magical.  Tools like this make viewing the maps so much easier.  You will see, though, that as of this moment you can search only the Connecticut railroad valuation maps.  MAGIC has plans to, in time, complete the index, to encompass all of the maps that are currently in the Digital Mosaic, which include Massachusetts, Rhode Island and eastern New York.  Something else I want to point out is that the index makes it obvious that there are gaps in the system, that there are sections where, although the railroad ran between some points, there are no maps that covered these areas.  The fault of this lies in the fact that our original set of valuation maps was never absolutely complete, and that is reflected in the online maps.

I want to extend my most sincere thanks to Michael Howser and his staff, particularly Geography PhD student Jie Lin, who made this index a reality.   You’ve made a lot of railroad researchers VERY happy!

Can’t get enough photographs of railroad locomotives?  Here is another to enjoy.

Charles Dickens, in his 1842 book American Notes, wrote about an excursion he took by train from Boston to Lowell, Massachusetts.  He describes his trip in this way: “[The train] whirls headlong…clatters over frail arches, rumbles upon the heavy ground, shoots beneath a wooden bridge which intercepts the light for a second like a wink, suddenly awakens all the slumbering echoes in the main street of a large town, and dashes on haphazard, pell-mell, neck-or-nothing, down the middle of the road…there – on, on, on – tears the mad dragon of an engine with its train of cars; scattering in all directions a shower of burning sparks from its wood fire, screeching, hissing, yelling, panting; until at last the thirsty monster stops beneath a covered way to drink, the people cluster round, and you have time to breathe again.”

Takes your breath away, doesn’t it?

Railroads came on the scene in the United States in the early 1830s and immediately took hold of the national psyche, changing concepts of speed and time and providing limitless possibilities of the movement of agricultural products, goods of industry, and people to all points across the country.  The railroad was the means that brought the Industrial Revolution to the United States, ushering in the modern world we know today.  To the people of the 19th century, the railroad was a dream, a miracle, a danger, and the most marvelous thing they had ever seen.

But few photographs are as evocative as the one above, where railroad men pose with the nation’s new obsession.

For more information about the Railroad History Archive, visit http://railroads.uconn.edu/ 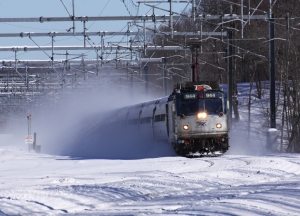 Amtrak's train 83 rounds curve as it kicks up the fresh snow at Old Saybrook, Connecticut. Photograph by Robert LaMay, January 2011.

May 1 was Amtrak’s 40th Birthday! In celebration of this event we’ve put up an exhibit in the McDonald Reading Room of photographs and timetables showing the trains of Amtrak. All of the photographs were taken by Robert LaMay, whose collection we have in the Railroad History Archive. 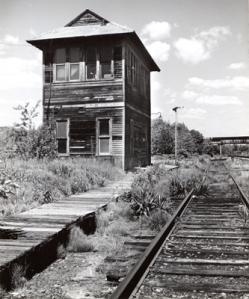 James S. Klar spent his working life as a city planner, but his first love was photography. After he retired he indulged in his passion full-time, and received training in photography techniques. In 1975 he received a grant from the Connecticut Commission on the Arts to photograph 75 railroad stations in southern New England for an exhibition. This photograph of the Old Saybrook Interlocking, or switch, tower, was taken on June 10, 1975, for the exhibition.

James Klar died in 1985 and in 1990 his wife Marjorie donated the photographs from the exhibition to the Railroad History Archive at the Dodd Research Center. The photographs show exquisite details of old railroad stations and structures, many of them dilapidated.

The interlocking tower in Old Saybrook was built in 1912, for the New York, New Haven & Hartford Railroad. An interlocking, or switch, tower was an important feature for railroad safety. It allowed the tower operator to communicate with railroad personnel about train movements, and to control junction switches and signals with a bank of levers on the second floor. In the 1920s the mechanical interlocking was replaced by banks of electrical relays, which were replaced by pneumatic assists. By the 1970s changes in dispatching technology rendered the tower obsolete and it was closed. The tower was razed in June 1998. 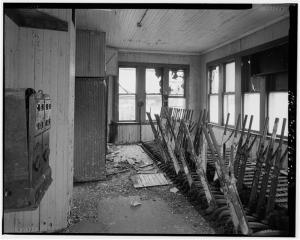 This photograph of the switching levers on the second floor of the tower was taken in 1997 by Robert Brewster when it was recorded for a Historic American Buildings Survey, which you can find in the Connecticut Historic Preservation Collection at the Dodd Research Center.