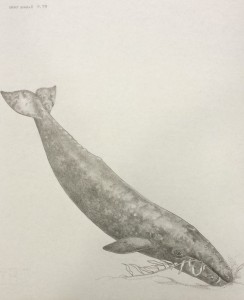 In March, I curated an exhibit exploring the theme of ocean ecology in children’s literature. While looking for material for this project I stumbled upon a series of whale drawings by Jean Day Zallinger (b. 1918). The Jean Day Zallinger Papers are part of the Northeastern Children’s Literature Collection in Archives & Special Collections. An artist trained at both the Massachusetts College of Art and Yale University, Jean illustrated non-fiction science books for children, including a survey of human evolution, a history of the dinosaurs, and even a chapter book about the camouflaging techniques employed by different species of fish.

The drawings I found were produced by Jean for Helen R. Sattler’s Whales, Nomads of the Sea (1987). Altogether, there are over forty drawings, each a portrait of a different species of whale, dolphin, or porpoise. These illustrations can be found at back of the book in a cetacean encyclopedia. Here, each drawing is pictured alongside information about the range, diet, and behavior of that species.

I included one of Jean’s drawings in my exhibit, which despite my attempts to the contrary began to develop a distinctive whale theme. When we talk about ecology and species preservation, it’s tempting (and fun!), but not representative, to focus on the biggest or most exotic species in an ecosystem. Whales, poster children for the modern environmental movement since the 1970s, have long been the subject of popular ocean imagination.[1] For this reason, I wanted to include books in the exhibit featuring creatures or themes not typically included in public conversations about ocean conservation. I found several of these but I found many more books about whales.

Whales have been a part of my personal imagination for many years. I am completing my University Scholar thesis on the end of the nineteenth-century whaling industry in New London, Connecticut. In my research, I focus on three species of whales: Southern Right Whales, Pacific Sperm whales, and occasionally humpbacks. These were three species typically hunted by nineteenth-century American whalemen. And so when I first 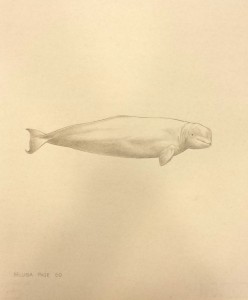 discovered Jean’s drawings, which include illustrations of narwhals next to grey whales, pygmy sperm whales, and Atlantic white-sided dolphins, I was startled. I had forgotten that there were so many species of cetaceans.

While Margaret Waring Buck illustrated many of her books about nature from direct observation, it is likely that Jean Zallinger had to draw many of these images, particularly of the more obscure species, from photographs. It is easy to get up close in personal with a mouse in a hamper, but it’s much more difficult to do this with creatures that spend their entire lives under water. As my advisor Prof. Matthew McKenzie (UConn Avery Point, History) has told me repeatedly, the invisibility of ocean resources makes achieving ocean sustainability difficult. “It is easy to comprehend destruction when you see a clear-cut forest,” he says. “Fish and other ocean creatures we hunt for are cloaked by the ocean. Their invisibility makes them seem fathomless.”

Recently, as I returned to look at Jean’s drawings I immediately envisioned lining them up along one long table. (I didn’t.) But if I were to, the end result would be a striking literal visual illustration of marine mammal biodiversity. Jean’s artwork, and books like the ones featured in the exhibit earlier this semester, inform and entertain. But they also strengthen our relationships with ocean creatures and the likelihood that these relationships will be sustainable ones by illustrating for readers what is otherwise invisible.

This is the final post by Rebecca D’Angelo, a senior undergraduate student in History and Anthropology. She is a writing intern and student curator in Archives and Special Collections at the Dodd Research Center, University of Connecticut.

[1] Motohiro Kawashima, “The Imagined Whale: How the Media Created a Sacrosanct Creature,” The Essex Graduate Journal of Sociology (University of Essex, 2005). http://essex.ac.uk/sociology/research/publications/student_journals/pg/graduate_journal_vol5.aspx.