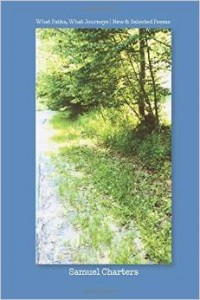 We are deeply saddened by the passing of Samuel Charters, poet, novelist, biographer, translator of contemporary Swedish poets, and renowned scholar of the blues, jazz, and musical culture of the African diaspora.  Samuel Charters was a friend and generous, longtime donor to Archives and Special Collections at the University of Connecticut.

For nearly 50 years, Samuel Charters discovered and documented African American music. Starting as a field recorder for Folkways Records in 1954, Samuel Charters served as recording director for Prestige and Vanguard Records, producer for Sonet Records and owner of Gazell Records. He published many books about the blues and musicians who played the blues.  His most recent biography, Songs of Sorrow (University Press of Mississippi, 2015), is the story of Lucy McKim Garrison, the woman who was the creative force behind the first collection of spirituals of American slaves, the 1867 volume Slave Songs of the United States.  Samuel Charters’ new book of poetry What Paths, What Journeys: New & Selected Poems, issued last month under the Portents imprint, is a selection from his lifetime, “hymning nature, family, friendship, travel and the stuff of life.”

In the field, Samuel often collaborated with his wife Ann, who is a writer, literary scholar, photographer and pianist in her own right. Their quest to document African American music took them to St. Louis, Memphis, Mississippi, Alabama, South Carolina, Louisiana, the Caribbean and as far as Africa. In these places, the Charters tried to record music that they believed was going to be lost. Their efforts to preserve and share the songs that they heard on their travels culminated in a working archive, the Samuel and Ann Charters Archives of Blues and Vernacular African American Musical Culture, that provides researchers with a complete experience of African American vernacular music.

Encompassing literary manuscripts, personal papers, records of the independent record label and small press Portents, first editions by Harlem Renaissance writers, recordings of Harlem Renaissance performers, early poetry publications and manuscripts in the records of Oyez Press, and the the Samuel and Ann Charters Archives of Blues and Vernacular African American Musical Culture, Mr. Charters’ extraordinary archive continues to expand and grow here at the Dodd Research Center.  The archive documents the calico of activities, affinities, interests and careers of Samuel Charters, prolific writer and poet, and endures as an invaluable resource for students and scholars for generations to come.