A new finding aid is now available for the Emily Arnold McCully Papers.  The collection consists of sketches, dummies, research materials and artwork for eight of her books: The Taxing Case of the Cows,  the Divide,  Old Home Day,  Ballot Box Battle,  Ballerina Swan,  My Heart Glow,  Secret Seder, and  The Helpful Puppy.  Emily Arnold McCully, an American writer and illustrator, won the Caldecott Medal for U.S. picture book illustration in 1993, for Mirette on the High Wire which she also wrote. 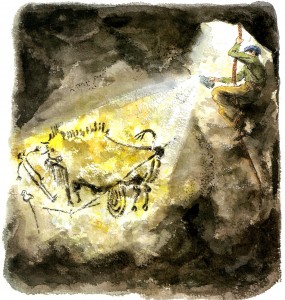 She was born in Galesburg, Illinois, in 1939, and grew up in Garden City, New York. She attended Pembroke College, now a part of Brown University, and earned an M.A. in Art History from Columbia University. At Brown she acted in the inaugural evening of Production Workshop and other plays, co-wrote the annual musical, Brownbrokers, and earned a Phi Beta Kappa key.

In 1976, she published a short story in The Massachusetts Review. It was selected for the O’Henry Collection: Best Short Stories of the Year. Two novels followed:  A Craving in 1982, and  Life Drawing in 1986. In 2012, Ms. McCully published  Ballerina Swan with Holiday House Books for Young People, written by legendary prima ballerina Allegra Kent. It has received rave reviews from The New York Times, Kirkus Reviews, and School Library Journal and was praised in the “Talk of the Town” column in The New Yorker.

As an actor, she performed in Equity productions of Elizabeth Diggs’ Saint Florence at Capital Rep in Albany and The Vineyard Theater in New York City.  In addition to the Caldecott Award, Ms. McCully has received a Christopher Award for Picnic, the Jane Addams Award, the Giverney Award and an honorary doctorate from Brown University.