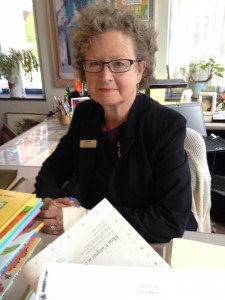 It is with heavy hearts that we will soon bid farewell to our colleague Terri J. Goldich, who currently serves as Curator for the Northeast Children’s Literature Collection, when she retires on July 1.  Terri has greatly contributed to many successes in Archives & Special Collections and the UConn Libraries, where she has been an employee in many different capacities for the last 38 years.

Hired in March 1977 to participate in the Pioneer Valley Union List of Serials cooperative program, the first ever effort for libraries in the region to automate information about serials, Terri soon moved on to other positions in the UConn Libraries, including as the Connecticut List of Serials coordinator and to serve on the reference and information desks.

Terri was among the first staff in the Thomas J. Dodd Research Center, dedicated in October 1995 by President Bill Clinton, which opened in January 1996 to house Archives & Special Collections.  Her first position in the building was as Events and Facilities Coordinator but she soon became Curator for the Northeast Children’s Literature Collection, and for a time the Alternative Press Collections, working under former Director Tom Wilsted.

Terri’s tenure as Curator for the NCLC was a period of great growth and distinction, as evidenced by an expansion of the archival collections from 30 to its current number of 128 and the acquisition of the papers and illustrations of such well-known authors and artists as Tomie dePaola, Natalie Babbitt, Richard Scarry, and Suse MacDonald.  Terri was also responsible for the great growth of the children’s book research collection from 13,000 to 46,000 under her oversight.

Terri played a pivotal role in the prominence and popularity of the Connecticut Children’s Book Fair, held the second weekend in November every year since 1992.  Terri joined the Book Fair Committee in 1998 and became Co-Chair in 2006, taking on the responsibilities of fundraising and as a primary contact with the authors and illustrators invited to present their books.

Other important contributions undertaken by Terri while at the UConn Libraries was as a judge of the Rabb Prize, a contest for UConn students in the illustration program, and as head of the library’s Exhibits Committee for many years.

When asked for a noteworthy reminiscence of an event that occurred while at the UConn Libraries, Terri told us that in 1996, on her second day of work in Archives & Special Collections, Tom Wilsted asked her to spend a day with a Norwegian gentleman who turned out to be Dr. Francis Sejersted, the Chair of the Nobel Peace Prize Committee.  Dr. Sejersted was visiting campus to participate in one of the symposia organized around the closing of the Thomas J. Dodd Research Center’s Year of Introspection, in which Soviet President Mikhail Gorbachev also played a part.  He had a free day and wanted to see the local sights; Tom was unavailable and so corralled Terri to act as chaperone.  They scared up a limo and driver and went off on a lovely daytrip to Sturbridge Village.  Terri noted that the Dr. Sejersted had a particular fascination with the sawmill operations.

Terri tells us that after a short visit to her daughter Rose, who currently lives and works in Montana, she plans to enroll in the state’s foster parent program.

Terri’s coworkers will sorely miss her deep knowledge of the children’s literature collections, her spirit of collegiality and kindness, her wicked good party planning expertise as well as her infectious laugh and delightful humor.  We wish Terri the best for her retirement and thank her for her hard work and good humor through her years at the UConn Libraries.