At the end of my last post, the Cadet battalion of the Connecticut Agricultural College had made the successful transition to a full-fledged ROTC unit and weathered the trials of the First World War.

The program remained in a state of flux for the first few years following the Armistice. Captain Cranston remained in Storrs less than a year, but between his efforts and those of his successor Captain Benjamin Ferris, the battalion grew to an unprecedented size; a September 1919 edition of the Connecticut Campus stated that enrollment was large enough to form between three and five companies of Cadets. The ROTC band was also reestablished that same November following a brief hiatus during the war.

The training itself also underwent a gradual standardization. By regulation, CAC males completed a mandatory “basic course” in Military Science during their freshman and sophomore years, and then decided whether or not to continue on to the advanced course, which would lead to an officer’s commission following graduation. As members of the advanced course, Cadets were paid a daily stipend during the school year (in 1921, it was 40 cents.) Satisfactory completion of the basic course was a requirement for graduation, regardless of whether or not the student continued his participation past sophomore year. The curriculum amounted to three hours of study and practical exercises per week, and included target practice (both at the lighted indoor range in Hawley Armory and an outdoor range near the New Storrs Cemetery on North Eagleville Road) and instruction on personal hygiene, military organization, and map reading, among other subjects. There was also time allotted in the early morning for drill and ceremony, and overnight campouts and route marches to nearby Coventry and Willimantic were made possible following the issue of individual “pup” tents to the Cadets. 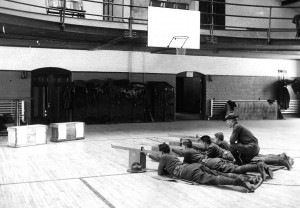 For all the progress, however, there were issues. Cranston’s sudden departure and the arrival of a new commander at the beginning of the 1919-1920 school year caused some confusion and fostered what one student later called the “disease” of “indifference in the cadet personnel of the battalion.” The turnover rate for Professors of Military Science would remain high; Captain Ferris departed in the fall of 1920, and his successor Captain Boyer spent just two years at Storrs. Moreover, instructions from the War Department necessitated frequent changes to the training schedule, and cadre struggled to maintain a sense of continuity between school years. As a result, few upperclassmen were enticed to move on to the advanced course once their obligation was fulfilled, and morale suffered. 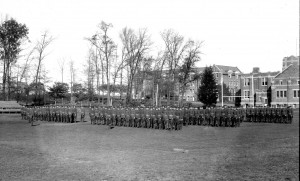 CAC Cadet Battalion, 1924, with Koons Hall and Hawley Armory in the background.

It wasn’t until early 1921 that progress began to be made through the establishment of a permanent command structure for the battalion, and the appointing of juniors and seniors as Cadet officers. This organizational change was supported by the arrival of new equipment, including modern Springfield 1903 rifles and one of the new M1918 Browning Automatic Rifles. That fall, a group of returning seniors vowed to continue improvements, stating that “as much college spirit should be shown in the conduct of the battalion as in the conduct of our athletic teams, or any one of our activities.” By 1922, attempts were being made to reestablish traditions like the annual military ball, and the following year it was reported that some twenty juniors would be continuing on to the advanced course.

These changes within ROTC were mirrored by significant transformations to the campus as a whole. The old wooden buildings of the nineteenth-century—many of which had burned down or been demolished by the 1920s—were gradually replaced by the more fireproof red brick structures that are so well known today. A new dining hall, known as the “Beanery” (namesake of the café currently in the Benton Museum), opened in the spring of 1920. Holcomb Hall, a women’s dormitory, was completed in 1922 to replace Grove Cottage, which had been destroyed by fire in 1919, and construction of the William Henry Hall dormitory (the future home of UConn ROTC) was completed in 1927. (Photographs of these and other early campus buildings can be found in our digital collections.)

Then, as now, Cadet life had its benefits and hardships. A system of demerits for student infractions had been in place on campus for years, as indicated by a 1916 edition of the CAC Handbook. Accumulating too many would result in extra duty on Saturdays. For a time, dormitories were inspected each weekday morning and in the afternoon on Saturday, and failure to keep things in good order resulted in demerits or monetary fines: floor not swept, 10 demerits; paper cans not emptied, fifty cent fine; and so on. There were also regulations which governed everyday activities. Among the more interesting punishments:

Any cadet who plays a musical instrument during class or study hours will be punished by a minimum of 10 demerits.

Any cadet who practices football or baseball or who throws snowballs, apples, stones, dirt, etc. within 100 feet of a dormitory will be punished by a minimum of 25 demerits.

These rules evidently didn’t stop some Cadets from occasionally letting off steam. Captain Ferris penned a letter to President Beach in 1920 concerning the possession of firearms on campus, complaining that “[the students] are constantly firing from the windows in the dormitories.” Beach subsequently reiterated in a bulletin part of the CAC Student Regulations, which stated that “students are not allowed to keep in their possession firearms of any description other than the service rifle.” The punishment for discharging a firearm on campus? A minimum of 50 demerits.

There was, of course, the requirement to wear a uniform, but by 1923 training was organized in such a way that students were required to do so only one day a week (not including the occasional parade, field exercise, or social function.) The off-campus hikes and campouts were seen not only as training exercises, but as opportunities to escape the tedium of campus life; upon announcing one such excursion in May of 1919, Commandant Cranston noted that he intended “to give the men as good a picnic as is possible without interfering with the instruction which they are to receive,” and extended an invitation to all faculty members wishing to join in on the activities. 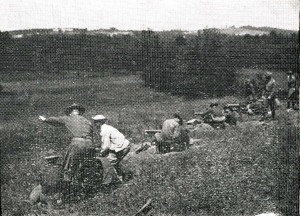 Cadets on the machine gun range at Camp Devens, summer 1925

Even the six-week summer training camp required of advanced course Cadets after their junior year, which might have been seen as arduous by those used to the pace of on-campus training, was far from miserable. Those attending the training in 1924 at Camp Devens, for example, found time for “baseball, swimming, riding, movies and exploring” once work ceased for the day at 3:30pm. The following year, in addition to qualifying on the range with their service rifles, Cadets had the opportunity to conduct familiarization fire with automatic rifles, machine guns, and pistols. A howitzer demonstration had been planned, but was cancelled due to lack of facilities.

For all its ups and downs, military training remained mandatory for male students at CAC, even if it only consisted of a few hours a week for the first two years of their college career. This fact was the cause of considerable debate during the interwar period; many pointed out that under the terms of the Morrill Act, courses in Military Science need only be offered by land-grant colleges, not required. As early as 1926, some CAC students protested the idea of a male student being forced onto the parade field every Friday morning, “prancing around for two hours, laboring under the weight of a baby cannon perched on his shoulder.” In the 1930s, Psychology Professor Florien Heiser claimed that “a large number of students dislike the requirement because it is boring, of little or no educational or physical value, interferes with other work and because of opposition to all war and militarism.”

These sentiments reached a boiling point in 1935. In April of that year, responding to agitation against ROTC at a number of colleges across the nation, the Board of Trustees of the Connecticut State College (the name had again been changed in 1933) passed legislation forbidding public debate over military training on the Storrs campus. Quickly dubbed the “gag rule” by those opposed to it, the act garnered significant criticism from students, faculty, and outside groups. On May 15th, just a few days after a large on-campus protest, Charles McCracken resigned as President of CSC, though he maintained that he had made the decision to leave before the Trustees had issued their ruling. Shortly after, on May 17th, CSC’s Social Problems Club organized an off-campus discussion on the gag rule featuring a guest speaker from Columbia University. This was interrupted by a mob of pro-ROTC supporters, who threatened members of the Social Problems Club and forced another student, who had reportedly spoken against the gag rule, to jump into Swan Lake.

While this marked the end of major protests, tensions remained high throughout the summer of 1935, with the Trustees refusing to rescind the gag rule. It was only after Albert Nels Jorgensen was appointed as CSC President in September that the Board at last felt secure enough in the abilities of the college’s administration to repeal the motion. Jorgensen’s appointment seemed to bring a measure of calm to campus, and his arrival signaled another period of growth for the college. Within the first five years of his administration, no less than four new campus buildings were built using funds from the Federal Works Progress Administration (WPA), including Manchester Hall, a women’s dorm, the F.L. Castleman (Engineering) building, and Wood Hall, a men’s dorm completed in 1940 (now home to the History Department and other offices.)  There was also a fifth and final name change: in 1939, Connecticut State College became the University of Connecticut. 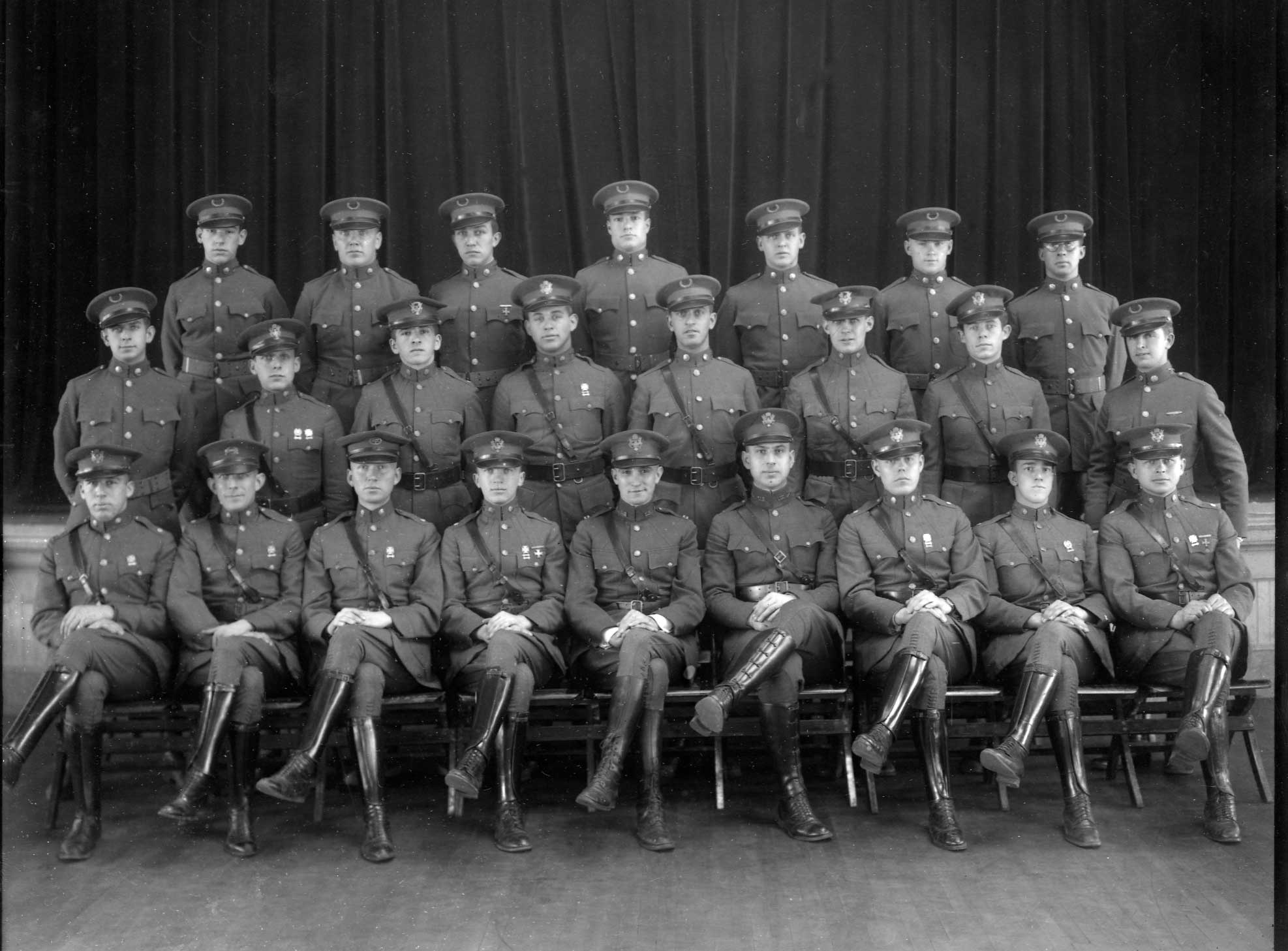 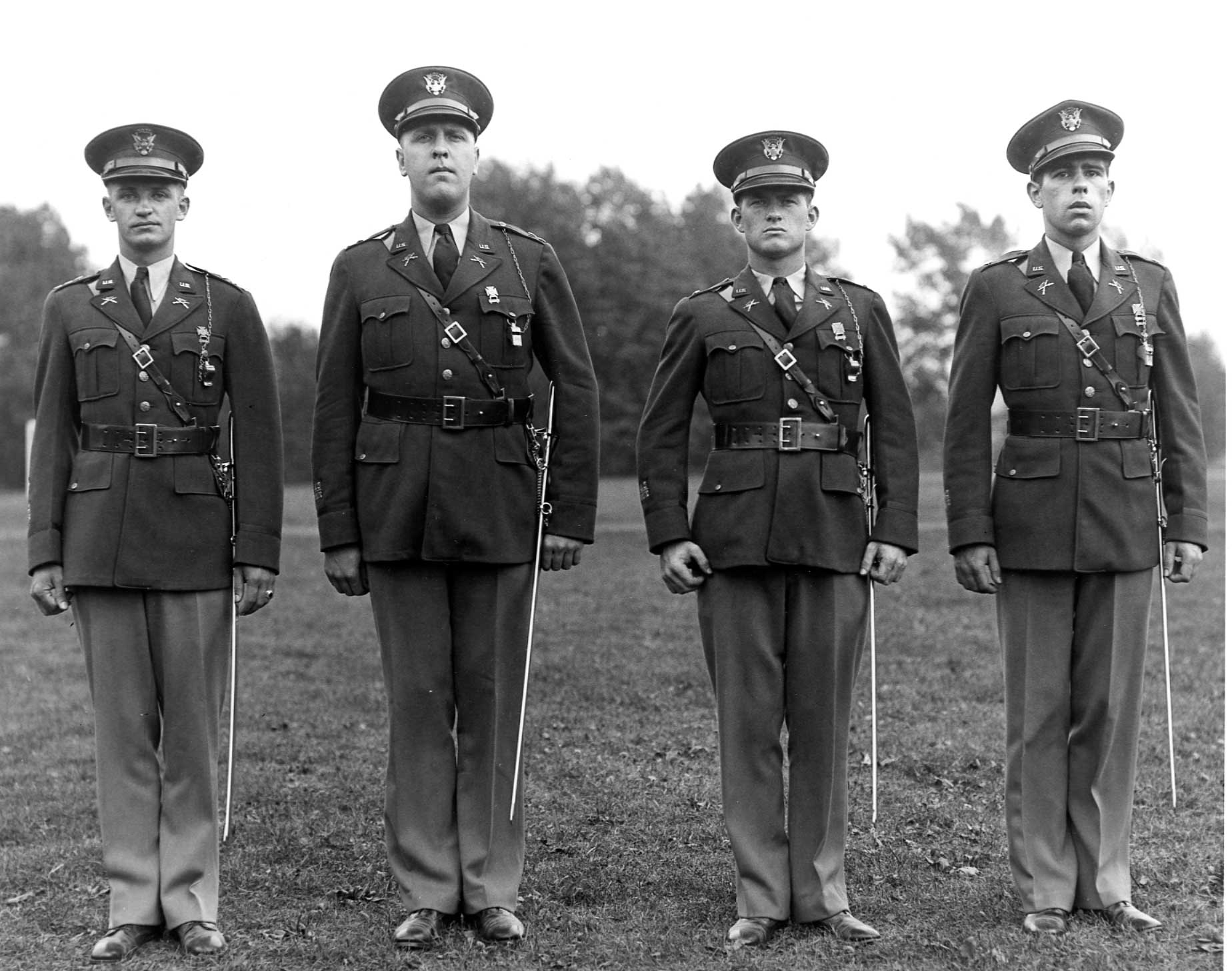 ROTC Officers, 1935. Note the modified uniform jacket with shirt and tie. The "choker" collar was done away with beginning in the 1926-27 school year. 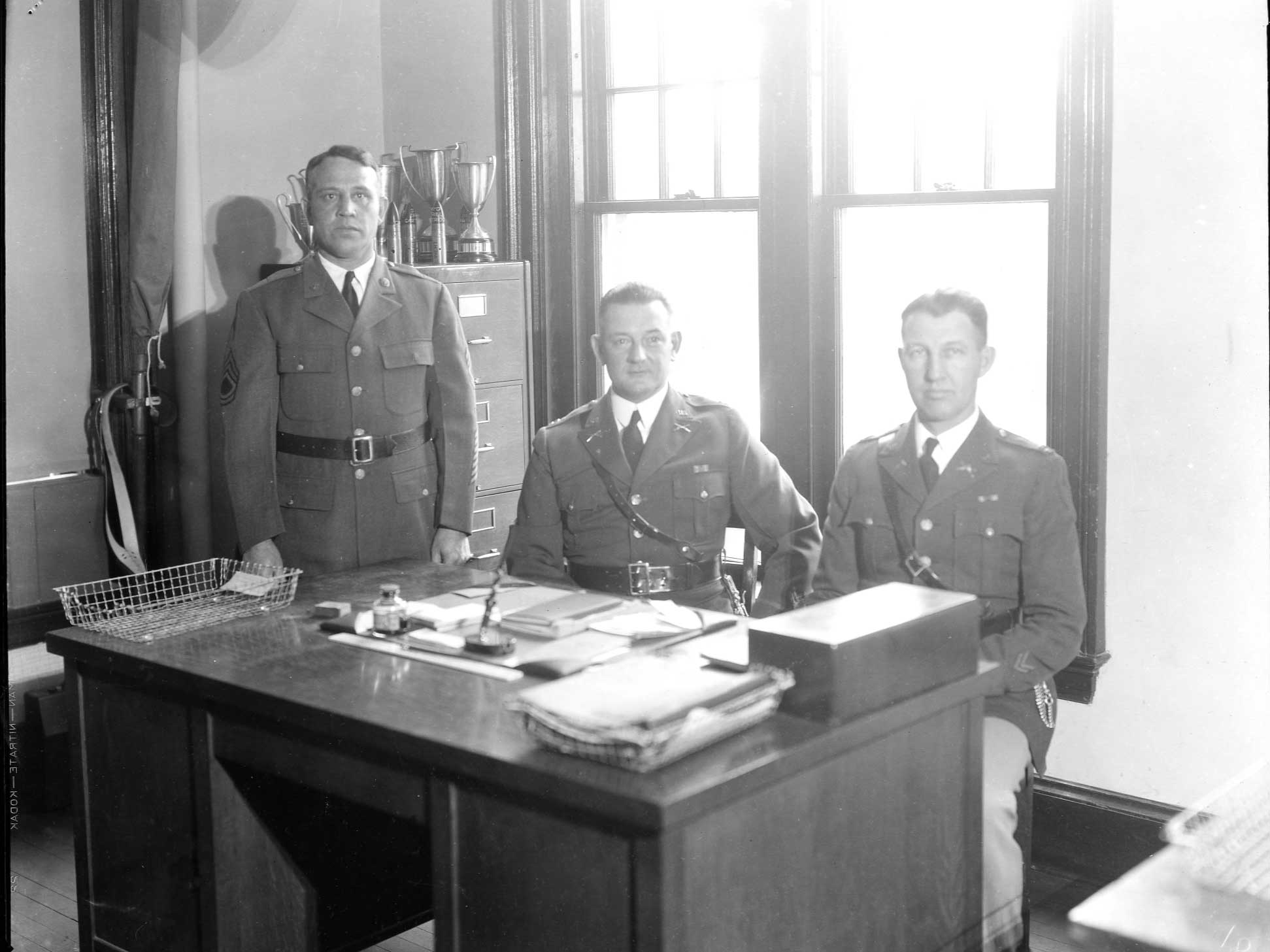 Color Guard on the steps of Hawley Armory, 1933.

The calm would not last long, however, as events overseas would soon make themselves felt in Storrs. Beginning in October of 1939, the Connecticut Campus ran a column entitled “History in the Headlines,” in which History Professor Andre Schenker offered commentary on the war which had begun that September in Europe. The following May, as students prepared to leave campus for the summer, Germany invaded France and the Low Countries. By the time they returned in September, nearly all of Western Europe had fallen to the Nazis, and England stood alone. To bolster America’s defenses, FDR signed the Selective Service Act into law on September 16th, and as a result those UConn students 21 years of age and older were required to register for the draft (unless they were seniors enrolled in the advanced ROTC course.) As worrisome as these developments were, America remained neutral, and so for the next year or so it was enough to simply note, in the words of the Connecticut Campus’s editor, “that the average college student stands ready to ‘do his part’.”

On the evening of December 7th, 1941, Professor Schenker was attending a performance in Hartford when an usher approached him with an urgent message. After speaking with him, Schenker immediately set off for radio station WTIC, where he served as a world affairs commentator. Later that night, he began his broadcast with the following words:

“It has happened. Japan has decided to commit suicide by attacking the strongest power on earth, the United States…As you all know by now, this morning in the Far East, which means this afternoon our time, a Japanese force suddenly attacked Manila, in the Philippines, and another force attacked the Gibraltar of the Pacific, our base at Pearl Harbor in the Hawaiian Islands.”

(The complete recording of Professor Schenker’s broadcast can be found here.)

War had at last come to the United States, and to Storrs. Next time, we’ll look at the role played by the men and women of UConn—and the Cadets of its ROTC program—in the deadliest conflict in human history.