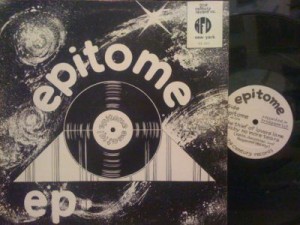 A recent acquisition to the Alternative Press Collection is one of the first record albums to be printed in Connecticut of the musical genre popularly known as punk rock.  Printed in 1978 by 21st Century Records, the band Epitome released their first album, a self titled vinyl 12″, Epitome ep, containing three tracks: The Thief of Lover’s Lane, Baby No More Tears, and Transistor Sister. Epitome formed in 1977 in Stratford, CT.  Playing venues from Bridgeport’s own The Snakepit, The Shandy Gaff in Milford to New York City’s famous C.B.G.B.’s and Max’s Kansas City.  The youth culture which formed out of the punk scene represents a politicized anti-establishment ethos and aesthetic that challenged previous youth movements from the late 1960s student based revolt.

To listen to this record, please make an appointment with the Alternative Press Curator.